Gballs linked to this on the poinsettia group.  I may have mentioned in this forum before that my grandpa used to work at this establishment.
Posted by beckler at 11:35 AM 7 comments:

Longest week, evs, or what?  I don't have a lot to say, and I have the next couple of weeks off, so no posts.  Does anyone want to post year-end lists?
Posted by beckler at 10:08 AM 28 comments:

I'm jumping the gun a little bit, but you guys are always really helpful with tips so I'm gonna ask:
Anybody know a good place/area to stay in Amsterdam?  How many days do you think is good for hanging there? If you've been to Belgium, what cities are not to be missed?
Posted by beckler at 9:20 AM 28 comments:

Making pickles was both fun and scary (I was going to say exhilarating and terrifying, but maybe I should tone down the hyperbole a notch).  We made three kinds and it took 6-7 hours.  We made sweet pickles beets, garlic dills, and spicy pickle chips. 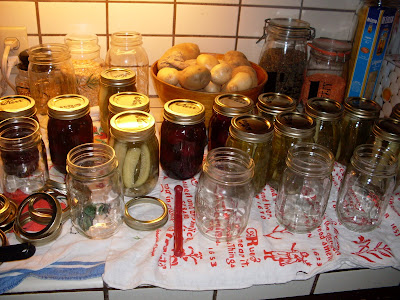 If any of you have experience pickling, I have questions.  Have you ever had the pickling go bad? How did you know?  Did anyone die?  What is the point of sterilizing the jars beforehand, because the jars obviously do not stay sterile as you pack them?  Also, we read different things about whether we should or should not sterilize the lids.  All the pickling literature you read will scare the hell out of you but it can't really be that hard to get it right, right? 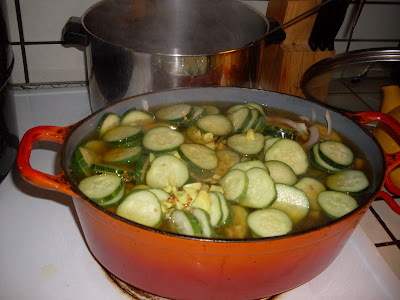 Elaine Corn of Capital Public Radio started the first of a series of broadcasts she is going to be doing about restaurants on Broadway today on local NPR.
Posted by beckler at 2:40 PM 3 comments:

Did you know that there is a Touchez/Rock The Light/San Kazagascar show at Javalounge on saturday?
One of the many things I love about Corti Brothers (yes, I am going to talk about Corti Brothers again) is their selection of weird, obscure, canned goods.  I picked this up a few months ago because I was intrigued by the can and it was only a few bucks.  You can't really see, but there's a chef guy on it who has a tomato for a face. 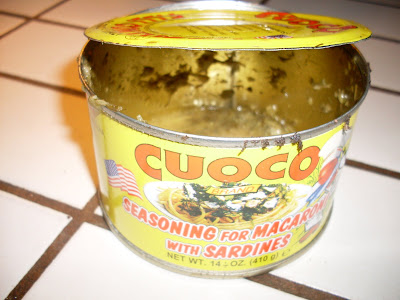 The ingredients are: wild fennel, onion, sardines, currants, and spices.  The fennel is wild indeed because it is mostly fennel tops, which are very fibrous.  This was a very exotic and interesting tasting dish.  I enjoyed it, but I'm not sure if I will purchase it again. 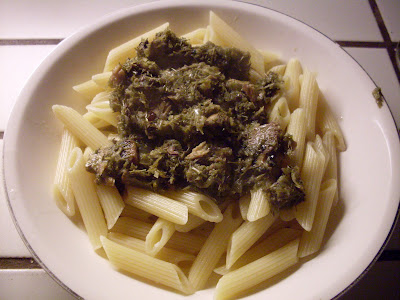 I went to a flea market yesterday that had a vendor selling a wide array of Mexican dulces, and now I have a whole new perspective on Mexican sweets.  I usually just think of the dry pastries and say thumbs down.  This booth had tons of candied fruits and coconut stuff.  I passed a guy who had big chunks of that brown stuff pictured below, and he was cutting off hunks and chewing on them.  He said it was mezcal, I guess he means it's agave.  It's slightly sweet and very fibrous, like chewing on sugar cane, but with the addition of a complex and very tabacco-ey flavor that kind of blew my mind.  He said people put it in tequila, and I happened to have some at home and that's what I did. 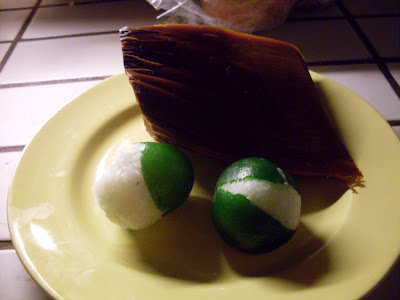 These are coconut-stuffed, candied lime peels.  This is one of my favorite candies I've ever had.  They also had blocks of this brown pudding/caramel stuff that they were giving samples of.   I think it might have had guava?  Anyone know about this? 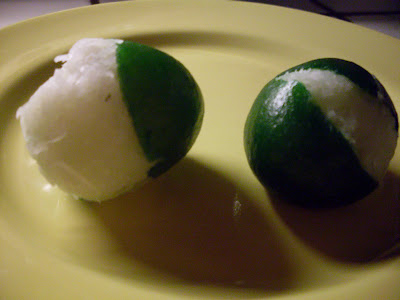 I infused the tequila with the mezcal for an hour or so and it turned brown. I added lime, too.  Delicious.  This would pair perfectly with a cigar. 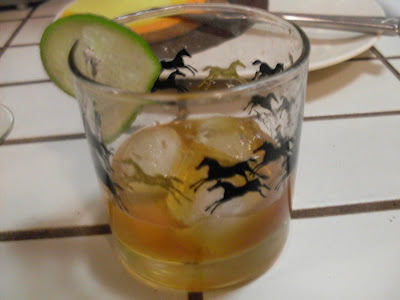 If anyone still reads this who works at the Sacbee (if anyone still works at the sacbee)-since your redesign I spend about 80% less time reading the paper online.  So if the goal was to make it hard to navigate so people wouldn't read it online and would subscribe, good job (except that I won't subscribe).  If that was not the goal: fail.
Posted by beckler at 9:06 AM 37 comments:

The MidMo party was pretty magical.  There was tons of really good food, I got a cool dress (I tried not to look around at Bows and Arrows because I didn't want to spend but it's IMPOSSIBLE not to find something good there), and Daisy Spot played one of my favorite show of theirs, ever. 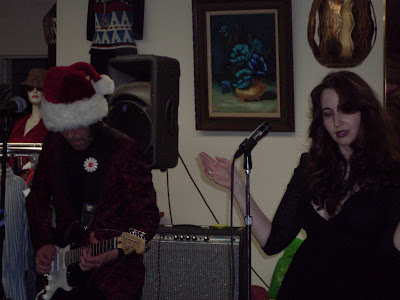 They could have played for a million years and I would have stood rooted to the spot, white hair growing down to the ground. 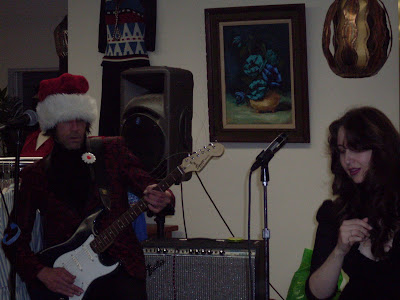 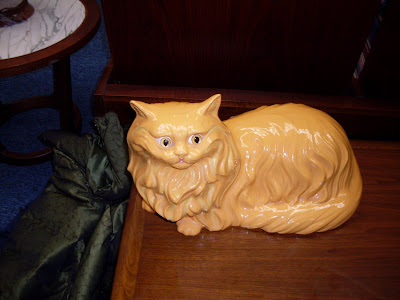 The fish are back

I tried to post these food pics on the midmo blog but the picture thing is acting up over there.  Has anyone else had that problem?
Due to finally getting to see Personal and The Pizzas up close and personal, I've been rocking the Mosquitoes CD around my house, and I discovered this morning that you can access one of the best songs on the record, "Hong Kong Flu", online here.
Just wait for a sec and click on the play button on the right.  I came thisclose to seeing if I could really buy a ringtone of it but when they texted the code to my phone it said it would cost ten bucks.
This blurry soup below is a new culinary fixation/sensation.  Remember in my Quan Nemh Ninh Hoa article (yeah, right) when I said that when you go to that restaurant you get the nem nuong? Well, for the most part this is what everyone there is ordering but the other night I wanted a seafood soup so I got this delight.  It has a delicate fish broth, peppery fish cake (JD do you know the name of this stuff?), hunks of hamachi (sometimes a little dry), and one little meatball that seems like a mix between fish and pork that is the treat to savor.  You can choose between rice noodles or udon, which is cool.  The udon version is $5.99 and it's a full meal! 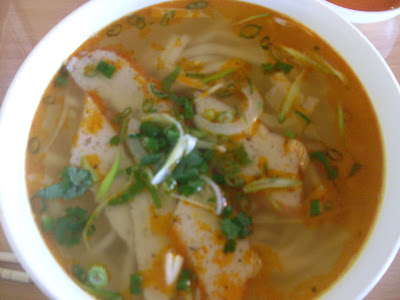 And the fish are back in the vases on the table!  This picture also shows the funny condiment trays with the raw garlic cloves and chiles. 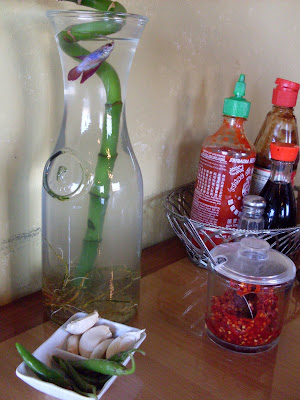 Red Kross.  So that probably got like two people's attention.  Do you like Red Kross?  The show tonight at the Funcastle features a Red Kross-esque band (Harlem-dumb name, I know) that I quite enjoyed last night.  It is also, sadly, the Standard Tribesmens last show.
Last night I was stoked to see Hunx and His Punx.  Watch this video to see why.  With animation by Janelle.
They have a new 45 out and it features a fully nude, front and back cover of Seth with a scratch off part over the bits.  I gladly scratched it.  Impressive.  All the dudes were dressed in nylons with nothing on underneath and big red bows around their necks.  That's the kind of Christmas present I like.
Harlem also played and then, most exciting of all-The Rantouls.  They are playing in Sac in January. Stoked!
Posted by beckler at 9:58 AM 13 comments: 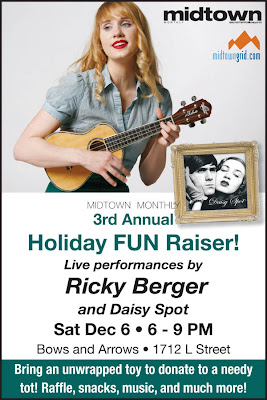 I'm at a training thing tomorrow, so no posts.  There's a show at Funcastle thursday at 8.  Standard Tribesman and Harlem.  Tonight there's a gamelan ensemble at Delta of Venus, which I actually bet would be pretty cool, especially with the help of some weed.
And you guys  know about the Midmo holiday fundraiser, right? Come around 6 to catch Daisy Spot.
Posted by beckler at 3:35 PM 4 comments:

I can't really sum up this video in words, just in feelings, and I can't describe those feelings in words.
However, I can sum up the picture below: if you have ever thought about making an apple pie with cardamon (cardamom?) and a dash of black pepper. Go for it, live a little, it's great.  I don't have a picture of the finished dude because it is a scarred ugly mess, as usual (curse you, Gourmet cookbook and your shattering crust) 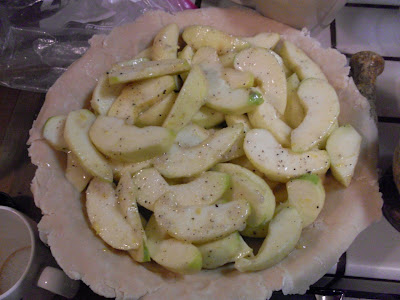 I accidentally had my camera on the sepia setting at the Appetite Enhancement Ride 2008, but for taking a picture of Mark Miller that's pretty appropriate.  He would look so old timey if his apron didn't have a Ben Davis logo. 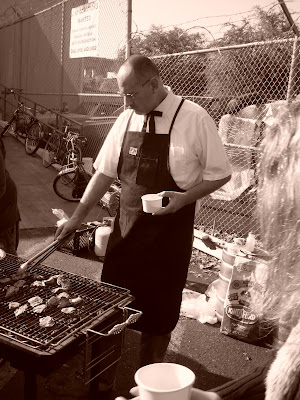 OK, Hmong New Year at Cal Expo.  I wrote a thing that will be in the News and Review on it, so here's the pictures.
I think these people were working the Vientianne booth.  They had sweet sticky rice and pork in bamboo tubes. 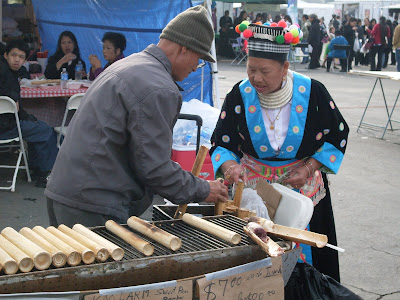 This girl was eating pho, and she put on her hat to do it. 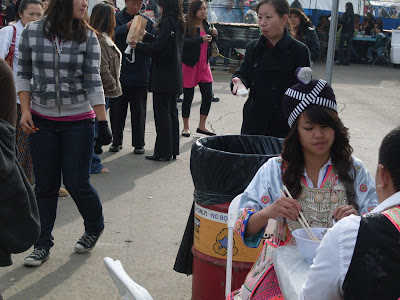 They are very serious about their papaya salad at this.  This is Hmong style! 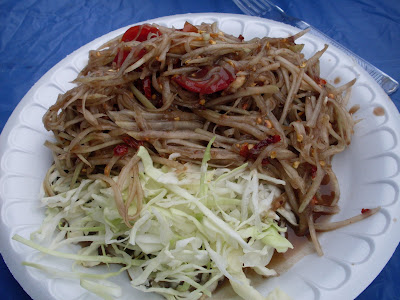 One small example of the fashion, which was totally off the chain. 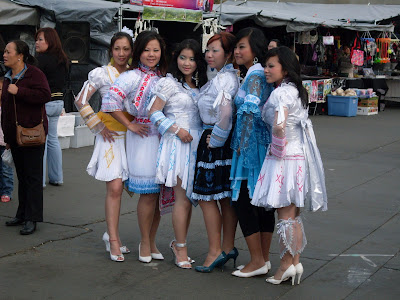 How bad-ass is this woman? 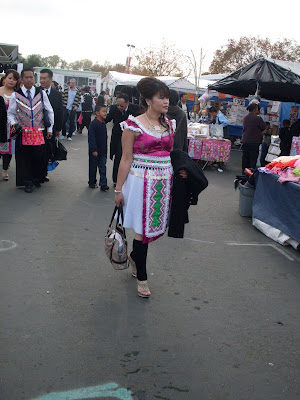 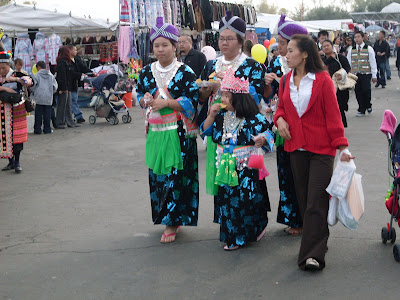 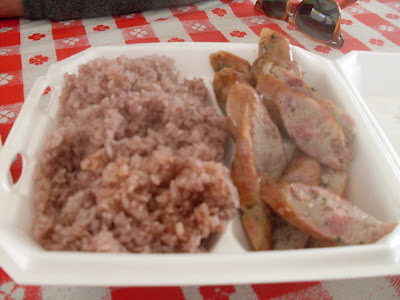 Tending the meat.  The air was sooo smoky. 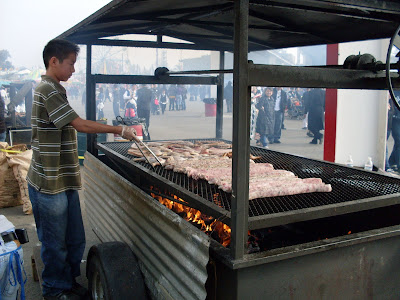 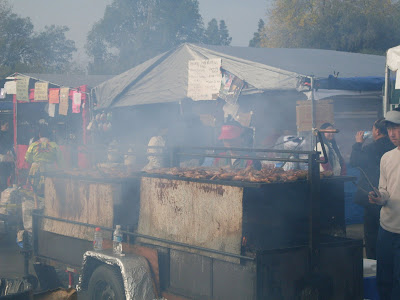 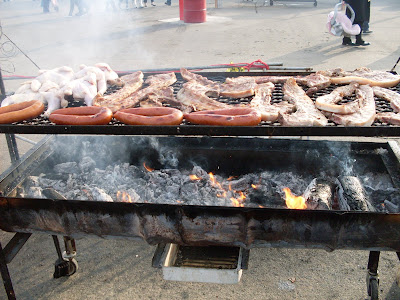 These ladies were working a papaya salad window.  They made it fresh and each order took about five minutes to prepare. 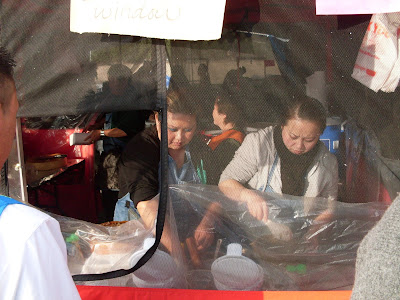 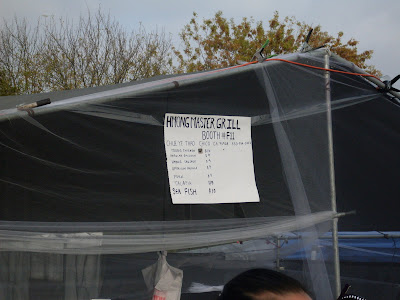 Does anyone know the deal with this?  The elders would line up across from each other and toss tennis balls. 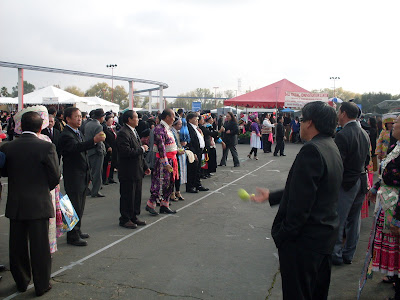 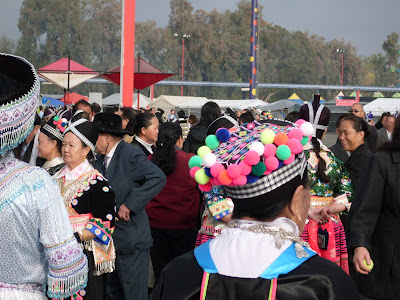 Here are the ball tossing rules.  They are sensible. 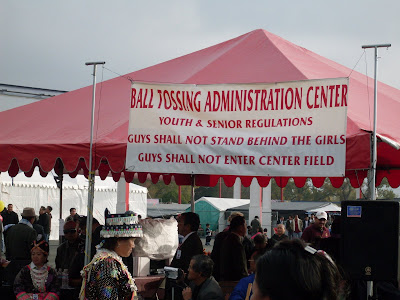 Best thing I've ever done at Cal Expo, and that's kind of saying a lot.
Posted by beckler at 11:16 AM 7 comments: