It seems like everyone is talking about movies everywhere I go and I'm loving it.  Not only my friends, but even strangers, like the checkers at the co-op debating the merits of the Lighthouse with a customer. I think this is an indication that peak TV is over. I mean, sure, a lot of movies were released on streaming this year, but I'm not counting those movies in my year-end wrap up. Look it's my wrap up and I can do what I want.

EVERYONE is talking about Uncut Gems, but smiller and I are supposed to see it together and he has very specific times he will go see movies so I haven't seen it yet. I did watch an earlier film of the directors' yesterday: Daddly Longlegs. Wow, disturbing. I also saw Good Times when it came out and their junkie movie too.

Here are the movies I saw in the theater in 2019. A couple were released in December 2018:


My favorite movie of the year, or maybe the movie I was most affected by was The Souvenir. I was gratified to see it made Obama's list and also cried inside to think that he used to be our president and he liked this and Booksmart. I mean, he liked the Irishman but I won't hold that against him.

Arctic hit my personal sweetspot of realistic hardship movies and Mads Mikkelson. I am somewhat embarrassed Climax is in my top ten but I'm being honest.

The worst movie I saw was probably After the Wedding. Non Fiction was not great either. Ad Astra was also lacking. Everybody Knows had dumb plot twists. Vice was meh, I will lump it in with Bombshell as "explainer movies your mom will like because they make her feel smart". Sorry to project my mom on you.

Beach Bum was entertaining but I felt nothing for it just like most of Harmony Korine's movies. Midsommar was fine but too derivative.

Highlife was the biggest fall from a director's last film, given that Claire Denis had just come off Let the Sunshine In

Destroyer was the movie I thought I hated but can't stop thinking about. The movie that made me feel the most pure movie-going joy was Once Upon a Time in Hollywood.

The movie that I saw on streaming that I wish I had gotten around to seeing was Serenity. That movie is fucking bonkers watch it right now. I had actually meant to get to it but it was only in theaters here like a week.
Posted by beckler at 11:30 AM 16 comments:

So smiller and I tried to watch the Irishman on Christmas Day eve. I say TRIED because after about an hour we tired of the horrible video game mouths and weirdly watery eyes of the CG actors. I really don't understand how people were able to look past that in regards to that movie, or why they would want to. If you liked it can you tell me how you dealt with how strange their faces looked and moved? Especially we all know how those actors looked at those ages, that just made it worse. The plot seemed pretty tired too, but I couldn't assess it properly because I was distracted. We switched to Season 2 episode 1 of the Sopranos, which we are rewatching and I remembered that pretty soon they'd have the episode where there was some CGI with Tony's mom that I remember as being terrible! But she is still alive in Episode 1, which is also when Janis comes back and is an excellent episode.

The NYTimes has this gross article about "ghost kitchens" which is a phrase I have been seeing around for a week or so so I had to read. It's kitchens where delivery food is made, sometimes under the rubric of a well known chain, like Sweetgreen. Did I use rubric right? I think this is a nasty way to eat, and it's hard to understand why people wouldn't just make some quick pasta or something, but I also live in a place without real weather, so I guess I can't judge. Getting to and from work in the snow would probably drain my desire to also shop or go out to eat. The worst part of it is a quote from David Chang, who invested in a ghost kitchens venture that failed a few years back,

"For the time being you still need humans to make food and to process it,” he said. “It’s not like being at a warehouse at Amazon where you’re taking something out of a box and putting it into a bag."

For the time being??? Wow, David Chang you are really showing your passion for food here! Can't wait until robots are making our meals and you can get super duper duper rich.

I don't know about you, but whenever I think about the word Tlaquepaque, I get the rap song "Laffy Taffy" stuck in my head. And since we bought a magnet at Tlaquepaque, I see it on our fridge multiple times a day, so I think of this song a lot. You're welcome. Learn about Tlaquepaque after the jump

Guadalajara: we continue to pay respect to maiz 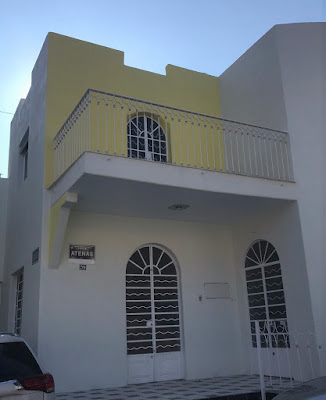 There are so many rad looking houses in Mexico, of course. This one had this really pale yellow, like lemon meringue accent paint everywhere. More cool houses and sandwiches after the jump

Guadalajara: I wait in line for lonches

So there I was in Guadalajara. I'd eaten two breakfasts, which added up to the best breakfast, and we were heading to the main government plaza in Guadalajara. I knew I wanted to go to the museums and galleries located in the Hospicio Cabanas. It's a gorgeous building built in the late 1700s/early 1800s that was a hospital and is now a cultural instiute. There was a rad exhibit on the yarn art of the Wixaritari, sometimes known as Huichol. 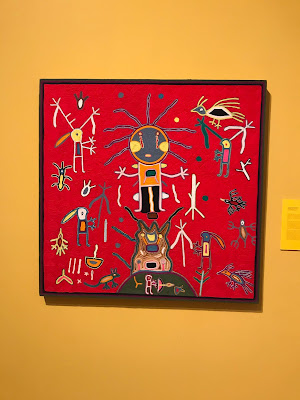 Guadalajara is cool, part 2: the day of good grub

I had read that due to the mining industry in Jalisco, Guadalajara has Paste shops, which are the Mexican take on Cornish pasties!! Since Smiller is Welsh we like to think of them as Welsh pasties and he was intrigued. Turns out that they make an awesome breakfast and they are about a dollar each. Want to see? After the jump
Read more »
Posted by beckler at 10:56 AM 1 comment:

Whatever your destination in Mexico, if you fly out of SMF you are often on the red eye direct to Guadalajara. I had never had G. recommended to me as a vacation destination, but its easy access via flight and the fact that it's the second biggest city in Mexico piqued my attention.

That made it somewhat of a wild card for the last three nights of the trip. Would it be fun, or just a huge traffic-y metropolis?

Answer: FUN. More after the jump

On to Puerto Escondido! 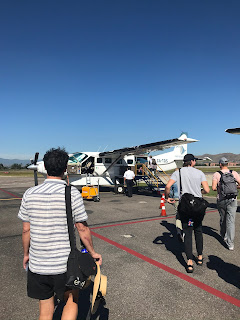 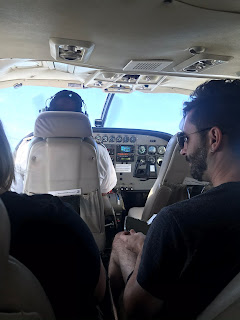 We reluctantly said goodbye to Oaxaca city and that great patio, and left on our way to Puerto Escondido, on the Oaxacan coast. We took a tiny plane. You can see my view of the pilot there. Notice the co-pilot seat is empty, finally proving all the bumper stickers true. Did we survive? Find out after the jump 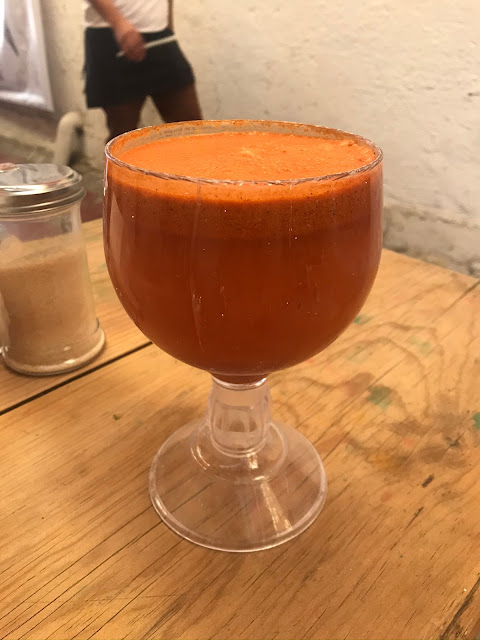 On our last full day, I headed back to the Reforma neighborhood (about a mile from the Centro) to check out Itanoni Antojeria and Totilleria. This spot is only open for breakfast and lunch and I knew this was my last chance. I'm so glad I went. Looking into it I see it is Alice Waters' fave Oaxaca spot (check out that pic of the egg frying on the comal!). See more of Itanoni after the jum

Mexican non-alcoholic beverages are a whole world to discover. This one is called tascalate. It's a mix of roasted maize, chocolate, pine nuts, achiote, vanilla and sugar.

Oaxaca: Monte Alban ruins and I bought a hat

After our full-day tour, Scott skipped out on a visit to the Zapotec ruins called Monte Alban,. It's about a 30 minute bus ride up the hill from Oaxaca and the driver just said to meet him back in 3 hours. The site is gorgeous and so was the weather. 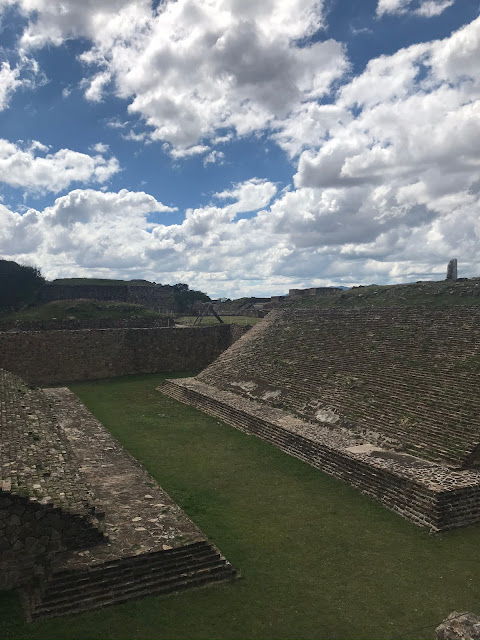 Besides the small museum, this is the first part you walk into. It's a ball court. A cursory search does not reveal the name of the ball game, but it was probably played with a rubber ball. More about this site after the jump
Read more »
Posted by beckler at 2:20 PM 2 comments: 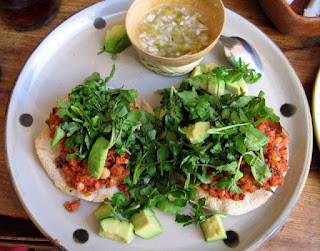 La Biznaga is a fancy place in Oaxaca and I must admit I was pretty skeptical about it but it turned out to be one of my favorite places I ate. We had dinner there and it was dim, so I borrowed this picture of their smoked marlin tostadas from this blog. More Biznags after the jump

Have you been reading Inside Land Park (or East Sac) lately? They are doing some serious muckraking, especially in regards to Steve Hansen and the bike trail. Graswich and Steve Hansen seem to be openly feuding. I'm definitely concerned about the fencing off the bike trail issue, but more than that, I'm concerned about what I'm reading about Steve Hansen's attempt to keep the press out of a recent public meeting and bar a photographer from taking pictures. I hope someone at the Bee or CPR picks up this story and runs with it. 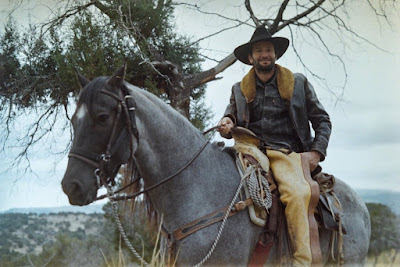 As a BIG fan of the movie Silent Light, I decided to watch director Carlos Reygadas' newest, a 3 hour movie called Our Time from 2018. I believe it never played Sac, or I blinked and missed it.

He starts really, really strong, with gorgeous ranch footage filmed in the Mexican state of Tlaxcala. He's got Malickian ways with filming nature, clouds, light, flora, fauna, the whole deal. I feel it was a mistake to cast himself in the lead. He said it was for financial reasons. He also cast his real wife and kids. His wife is good in it - he lacks onscreen charisma.

The movie is a bit of a slog. It's about a longtime couple's open marriage, and how a crush starts to upend it. It got mixed-to-bad reviews and a lot of criticism about the cringe-y power dynamics. He seemed pretty pissed off in interviews that people took it to be a male vs. female struggle. He saw the couple as equals, and that it was just a power struggle, but that gender roles were irrelevant. Yet the movie literally ends (this is not a spoiler) with two bulls fighting. How is it not about machismo and you end it like that???

I think he's a genius based on Silent Light so I'm still following his career. I think this movie would have been stronger as a two-hour movie with a different male lead. But I'm glad he's making movies and I hope he's at work on another one.

Oacaca, another day, I think 4

After I got back from Oaxaca/Jalisco I continued reading this Paul Theroux book about his recent driving trip through Mexico, with an emphasis on Oaxaca. It's a fun, discursive, informative book. It's a little on the curmudgeonly side, and he does some harsh critiques of other books about Mexico and also his take on tourists spending a tiny bit of time in Mexico and thinking they know or can explain it. I will try not to fall into that trap!It's interesting to get his take on a lot of what we experienced, including the sites in this 9 hour slog of a guided day trip we took. 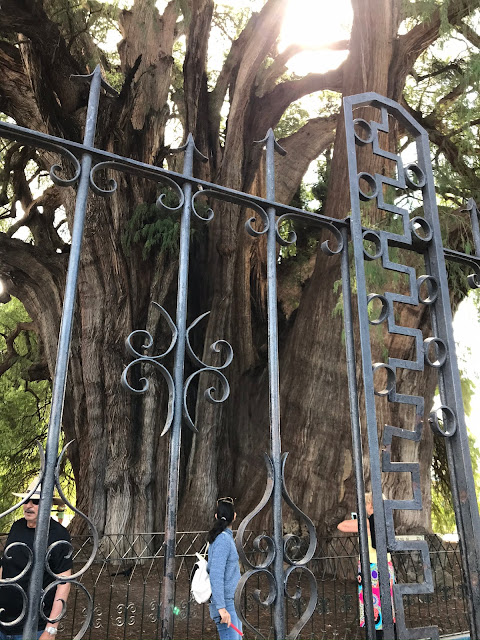 I won't go into visiting the Tule tree, which has the world's biggest trunk. It's a Montezuma cypress, in the town of Tule. Welll, there, I guess I just did go into it. It's a big-ass tree! More after the jump