So...we got robbed at gunpoint last night around 9 at 26th and H street.  We were walking back from dinner. It happened really fast. A guy ran towards us with a small revolver and ordered us to get on our hands and knees and give him our wallets, keys and cell phones. We did it really fast and I said I didn't have my phone.  I was worried that would piss him off but he didn't say anything.  He took our stuff and told us to walk away and not look back. He yelled at sm to pick up his keys and he did, but he didn't pick up mine and the guy was like "yo, bro, your keys". So I got mine back too.  I didn't see, but sm saw that there was another guy with him across the street and that they both ran towards J st.  More after the jump


I'm about to go out on a limb with this statement, guys, but the Rolling Stones are really good. They were talking about this song on NPR today. How hot is Mick?

I had to go to Starbucks to get a gift card for my Aunt today and the huge line was disheartening. What the fuck is wrong with those people? Why do they like burnt coffee? I don't think everyone needs to get into super light roasts, which can be too acidic and which I really can't get into, but that coffee is straight charred. My aunt certainly gets a pass because she is old. Is this going to piss someone off? My advice: go to Temple or Broadacre (even though I think those guys kinda suck) and look for a coffee with the description chocolately or rich or something. You just might like it. It's worth at least trying a little bit just not to support a huge crappy corporation that is overwhelming local businesses and blah blah blah preaching to the choir.

Two recommendations:Gerhard Richter documentary that shows how he makes his abstract paintings. Yes, I fell asleep at the end to the sounds of German, but by that time you had seen a lot of his technique. It's really unique and cool and I'm pretty sure he developed it and got all these custom squeegees made.

Not To Disturb by Muriel Spark. What a fucking bizarre book by the woman who wrote The Prime Of Miss Jean Brodie (which is pretty cute). This book is the length of a novella so it's a quick read

And in really high brow art I plan to watch both Die Hard and Lethal Weapon on Christmas Eve. I can't wait to see Mel Gibson's butt again and pretend he is not the worst dude on the planet.

ass handed to me

This definitely brought a tear to my eye.  What a wonderful article!!

I sorta got my ass handed to me in this letter about my review of Abyssinia, but I stand by what I said. If he means I made factual errors I wish he had pointed them out.  People who ate with me will confirm that some of them were wayyyy too salty and I love salt.

When does the Four Eyes show start?
Posted by beckler at 9:55 AM 47 comments: 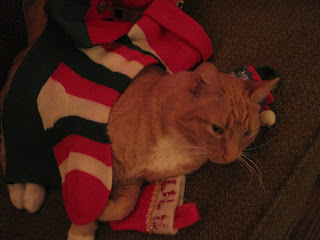 the lil b stocking was steve's. rip 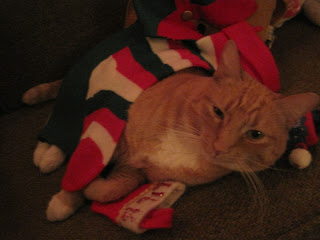 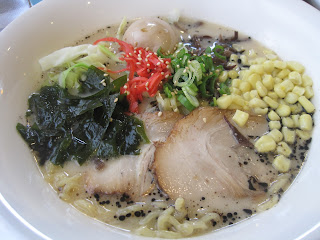 ramen from Ryu Jin.  The egg and chashu were very, very good 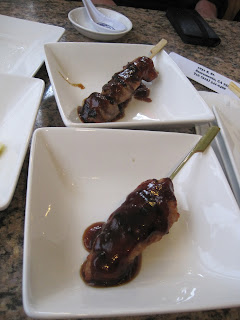 tasty yakitori. they had a strong grilled taste and I really liked the ground chicken one 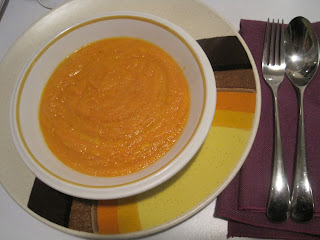 If I do say so myself, this was one of the best soups I have ever made.  Butter (surprise!) is the key.  It is a variation on a bon appetit recipe.  Cut carrots into 1 inch pieces. put on baking sheet and cover with melted butter, pepper, and salt. roast in a 425 oven for 25 minutes. puree with broth. i improvised and added tahini, curry powder, and cayenne (like EC I like cayenne on most vegetables). we sprinkled with sumac, because i was doing a sort of middle eastern-ish thing and sumac brightened the soup. 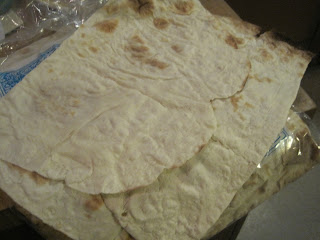 wow, lavash bread, why have I never gotten it before? I think it's better than pita.  I did my perfect roast chicken recipe, and made garlic lemon yogurt and we made chicken wraps.  my only regret is that it needed cucumber and mint and maybe a pickle. maybe i could get a takeout order of french fries and stuff them in there if i wanted to go crazy.  does anyone make their own falafel? a recipe would be great.

btw, I told Ryan D. my perfect chicken recipe and I told him 500 which was totally wrong! I pretty much wrecked a chicken last week before I figured that out.  And I fucked up  my oven so bad that now it's setting off the fire alarm all the time.  I was so embarrassed that he used the recipe.
Posted by beckler at 9:39 AM 4 comments:

So....the Westvleteren release was yesterday.  NPR covered it here if you want to read about it.  Rob at Pangaea said that they had fielded over 250 calls, from all over the US and as far as Japan.  One guy said that his dad was dying and wanted to have a bottle before he died.

My coworker went to pick hers up at the Davis Beer Shoppe somewhat early yesterday and they had already gotten 200 calls.

Forget about all that hype, because you're not going to be able to get any anyway, and go there and get a Drake's "Pinot to Go", a delicious imperial stout aged in pinot noir barrels. Nice for the season, too.  There is also a Mikkeller Hoppy Lovin' Christmas IPA that's good.
Posted by beckler at 10:43 AM 8 comments:

I went to the Steve Hansen swearing in and it was so inspiring.  The members of the gay community there were pumped and were easily half the crowd.  The gay men's chorus sang.  A muzak version of Step In The Name Of Love played.  Me and Liv Rickrolled ourselves when Never Gonna Give You Up came on, and OMF did not recogonize it, which is so OMF.  One of the best things about OMF besides being a mensch and so smart is that he is never not OMF, except maybe when he got a Blackberry, but now they are so outdated that they became OMF.  I ate a turkey wrap for the first time and it was ok, all in all, a momentous  night.

KJ made an appearance, to seriously tepid applause when mentioned by Steve.  He stood behind me uncomfortably as if he knew he wasn't welcome at the front.  Wow.  No wonder he doesn't want to be in Sac when he can be hobnobbing with Oprah or whoever.  Steve's speech to the crowd was very informal, and he mentioned the arts and that he is the first city council member of this district to live downtown.  He called his staff onstage and Maya Wallace was the second to get called up.  I bet she will be on the city council someday, perhaps closer than you think.

Crap, when step in the name of love came on, I realized I had heard something about an R. Kelly tour and didn't look into.  Turns out I missed his "single ladies tour" for his album "black panties" in Oakland.  He has announced one tour date in Baton Rouge for 2013 so hopefully he will come to Oakland or Sac.

I don't usually recommend movies, and I'm pretty up and down on Mike Leigh, but, wow, I have to say his early movie Nuts In May is by far the best I've ever seen. I recommend you give it a try.

I started this book, El Narco in Mazatlan because it was at the house where we were staying. It's about the drug wars in Mexico, going back to the very early days. It's fascinating. Mazatlan is in Sinaloa and historically that's been the spot (in the Sierra Madres) where peasant farmers have grown opium poppies and pot. In the 1800s, lots of Chinese immigrated to Mexico to work on the railroads and such, and they consumed opium and even started opium dens, some in Mazatlan!

Then the Sinaloans figured out that they could be making more money off of this and kicked the Chinese out of the business with horrible, racist campaigns. That started the whole deal with the Sinaloan cartels, of which there are three or so now, I think, based in Culiacan, the capitol of Sinaloa.

The really gnarly parts started with the Zetas, who are from the northeast and were started by a former Mexican special forces guy who recruited other military dudes. They are basically a terrorist insurgency at this point, although the Mexican and American government waffle on calling them that because it makes Mexico seem unstable.

The Zetas have been at war with the Sinaloans (who fight among themselves as well) and that's when things have been getting worse and worse.

Nothing the least bit sketchy happened in Maz, and they have gotten a handle on their graffiti problem, which made things appear sketchy last time. My mom claims it's not gang graffiti but I'm not sure I believe that. The only crazy thing is that cops cruise around standing in the back of pickup trucks with machine guns and their entire faces are obscured by black cloth thingies. That looks pretty nuts. It's to protect them and their families from assassination. However, their were less sketchy dudes there than in a typical night walking around Sac. And guys are respectful of women there, I didn't hear any catcalls for any ladies at all, which is certainly different from other areas.

Also: no trace of Montezuma's revenge although I had ice in everything and even ate a pile of lettuce this time and a bucket of salsa fresca and ceviche and everything. People are very careful not to make anyone sick because then they won't get any repeat business and will get a bad rep.

Mazatlan picture post after the jump!  I've been there so many times now that I don't want to repeat too many picture subjects I've posted in the past
Read more »
Posted by beckler at 1:52 PM 9 comments:

I'm back from Mazatlan! The honeymoon is over, both figuratively and literally.

There is a really good show on Saturday! Knock Knock, Fort Ancient (Biz's side project) and the legendary Hod from Santa Cruz.  At Midtown Village Cafe, which is turning out to be a pretty darn good venue.
Posted by beckler at 10:00 AM 3 comments: