thanks for the memories

Well, you guys have probably noticed that this blog is moribund lately. I'm calling it quits. Nothing dramatic, I just never feel like posting anymore. Hell, I rarely even check the thing lately, and it's only partially because I haven't had much free time to do so lately. I've said all that can be said for now. It's been so much fun! Now go check movie city usa!
Posted by beckler at 10:50 AM 45 comments:

ok, ok, I'm back. or am I? I'm conflicted. I don't know. I don't want to make this forum simply a place to post birthday wishes (you can take that shit to birthdays.com). but....happy 21st birthday Heather K.!!! I'm sure this is an even more monumental birthday for a music fanatic such as yourself.

Have you read the new Midtown Monthly (I'm cupping my ear to catch the chorus of "but of course's")? Check the writeup on Chris Daubert. This guy was my art history teacher at Sierra College back in the '90s, and he was an awesome teacher as well as being kind of a tall, bearded fox that I had a crush on. My final project was a collage on riot grrrl that if I remember correctly contained some Rollins imagery, and he gave me an A. Then, due to the crush, I took his drawing class but couldn't deal with the most basic criticism of something I was so crappy at so I dropped it. The show is up until the 29th, and it's at 923 20th st., so check it out!

The Barnseyard (which continues to be the best thing going), has pointed out that we are one of 14 select cities to open the new Cronenburg joint (ha, I'm making myself cringe with that phrase). I heard Viggo (who stars) on Fresh Air yesterday, and in addition to his vestigial tail (OMG, I just googled that to find my old post and found a screen grab and discussion of the tail!!!!!!!) I discovered that he's Argentinian and Danish, and speaks a bunch of languages fluently, and wait, am I gushing? Hmm...I mean gushing with praise but this is sounding obscene. Time to go!
Posted by beckler at 11:15 AM 17 comments:

I am suffering such major blog fatigue, I don't even check my blog first thing anymore! But if you are here, I'd like to say a big Happy Fucking Birthday to one S. Miller!!!!!

Just to let everyone know, there has been a last minute show scheduled at the Turtle House (217 2nd street, Davis) for tomorrow, Sept 6th. The following are playing..And The Sorcerer's Stoned (with Jon Bafus);Spider Friends myspace.com/spiderfriends;The Old Haunts (Tobi Vail of Bikini Kill is drumming) myspace.com/theoldhauntsThe show will be starting at 7PM and ending by 10PM. Come check it out!-Audry (DJ Kiwi)

Tobi Vail is pretty much the coolest chick around and deserves our respect as a founding father of Riot Grrrrrl, so you know I'll be there!

AP reviewed ANOTHER chain restaurant...a BBQ restaurant!! Snore. I am sick of the fetishization of pizza, burgers, and BBQ in food reviewing. There, I said it.

Sweet! SIX "American bistros" are opening in Sac this fall. Do you think they will offer upscale pizzas, burgers and BBQ? Again, can someone PLEASE open a French brasserie rather than a bistro? I promise you can still have a burger on the menu if you want. Do I have to open one in my house? I have some Edith Piaf records and bottles of affordable French wine, maybe I can do it. Can we have some food downtown from other cultures that's not motherfucking sushi? Out of nine restaurants listed in this article as opening soon (I'm not counting Vientiane, although it's nice he mentioned it), 6 are American Bistros (which will all be pricy), one is a pizza place, and one is a sushi place. That's cool that Turkish restaurant is opening, too bad it's in Rocklin.

I had another in a very long string of excellent dinners at Pho Bac Hoa Viet the other day (I swear the pho broth was even more flavorful and aromatic than usual) and I noted from a flyer at the front desk that Pho Bac is opening a branch at Jackson Rancheria. Good for them.

Does anyone out there eat at Tapa the World anymore? We went there last night simply because it was still open at like 9:45 and it was fun. Certainly not spectacular. They really need to update their menu, but if you know to stay away from the few dishes that all have the same butter-and-practically-raw-garlic sauce (the mushrooms, the shrimp), some of the tapas are good. The bread basket is excellent, the boquerones were top notch, and despite some gristle, the pork skewers were really juicy and well flavored with chili powder. The live Spanish guitar was pretty earsplitting, though.
Posted by beckler at 9:17 AM 14 comments:

Some in our fair-going party remarked on how dangerous the bungee cord ride thingy appeared to be and they were right...and look at the unsurprisingly racist comments on this article. Why oh why oh why will the Bee not block these comments?

Here are some other comments from hateful "tungsten". He's quite skilled at saying racist, homophobic things without using words that will get him flagged.

Renowned Yale singing group attacked in San Francisco
Tungsten at 3:47 PM PST Wednesday, January 10, 2007 wrote:
Gay Tolerance? Not for Straights!
There's the Gay militants for you. The same ones who continually call for Gay marriage and attempt to trump the will of the people. San Francisco values, you can have 'em

oh, and sexist, too

Equally gifted at gab?
Tungsten at 1:57 PM PST Friday, July 6, 2007 wrote:
It must be...............
Due to the feminization of the American male. Women finally henpecked the men enough that they too constantly and senselessly jabber. Let's all shaaaare!!!! And, by the way, your hair looks soooo cute!!! And those shoes!!! What about dancing with the stars?
Posted by beckler at 4:38 PM 16 comments:

Is it just me or does it feel like summer's over? I know it's not just me because I didn't think about it until a friend said it. How was your summer? This is what I did on my last weekend of summer.

Had oysters (from the farmer's market, they were all good, but the Kumamotos are a little small and "creamy" right now-I don't want to know what the "cream" is) and stout. This is a traditional accompaniment to raw oysters, but I'm not sure I get it yet. I googled oysters and stout to see what the deal was and this charming little Michael Jackson piece is what came up first. R.I.P. for sure. We are sitting shiva for him around our house. 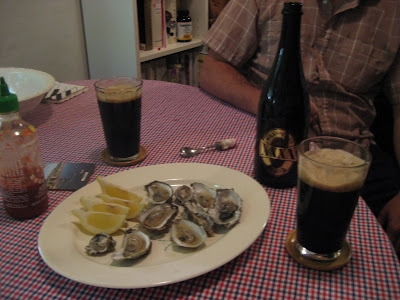 Watanabe farms told me that this coming sunday (the 9th) might be their last at the farmers market for the season, so I stocked up this time and made a summer salad with tomatoes, cukes, mint, corn, red onions, and a little red wine vinegar and olive oil. The 9th is also the antique faire! 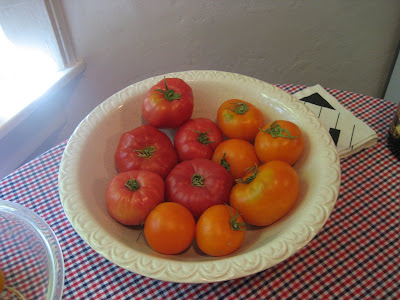 The summer-ending show has got to be Olsen's going away. The city will be a less musical place without him. I particularly enjoyed the old-timey Strokes song he played with Seven Arms of Shiva and his guest turn with the Four Eyes, on both the 'bone... 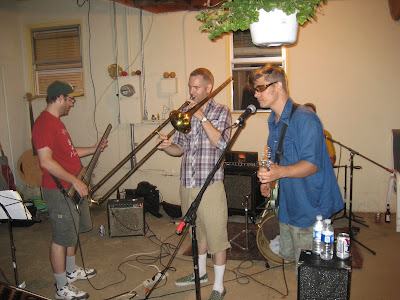 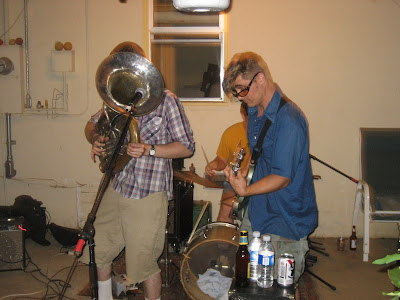 I also celebrated the end of summer by making perhaps my last summer produce pie, a peach one. That's a weed leaf rendering on top. Thanks to Marletta for the pastry cookbook, it was my favorite crust yet. However, due to lack of a double-crust peach pie recipe I screwed the pooch and undercooked it so that it became a double-crust, double-cooked pie. Speaking of pie, does anyone else think that Freeport Bakery is just so-so? Or at least just their pies. The Real Pie Co. berry pie blew theirs out of the water! Too bad the Real Pie Co. seems like it's never open or when it is open is out of pies. A victim of its own success! 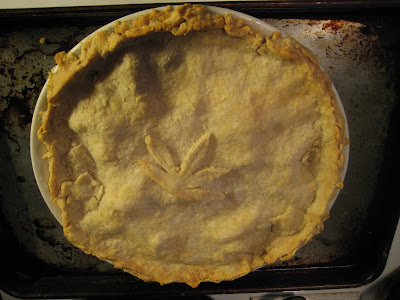