How about if I make the gripe of the day a regular feature?  Right now I am nursing a gripe, but I will post later in the day in case something better comes up. 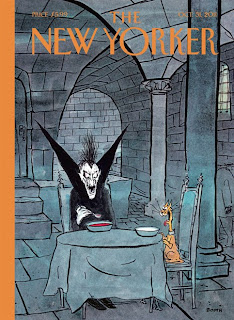 Keeping in mind my bad memory, I can attempt some year-end lists.  This was my favorite New Yorker cover, with an honorable mention for the Thiebaud food issue one and a request that they stop letting Hockney phone it in with his iPad sketches.  Also, can anyone tell the Clowes and Tomine covers apart?  I dare you to try.  I know this is going to be a pretty controversial best-of.  Let the arguing begin.

Nevermind, lists like that are boring.  I don't think I'm going to write any.

Four Eyes show on Saturday.  That's kind of unfortunate that the Trent Liddicoate art opening with Al Maxwell performing is going on at the exact same time.  I'll have to try to get over there to see the show at some point, thought.
Posted by beckler at 9:55 AM

Al won't be at the Xmas show? Weak!

I'm sure he'll come over after.

Ditto on the Hockney covers. Bleck

I believe Al plans to Skype in while he's playing his set. But no plans to Stipe out as far as I know.

Always available to go Buck however.

I'm glad you're backing me up here. I figured I would enrage some commenters with my anti-Hockney-iPad-stance. I hope Kevin Seconds doesn't hear about it.

Ps. Bruno Mars: artist of the year or artist of the decade?
Pps. Four eyes Xmas show will be exclusively played on iPads for instruments

Dude, I'm sorry to say, but I have heard about your love for Bruno Mars and it is time for an intervention. I'm just going to assume that you and your daughters got into him together and that has clouded your judgement but let me put this plainly - he SUH-UCKS. If the Four Eyes play any, and I mean ANY Bruno Mars song at this show I am going to turn my back to you for the length of the song. I am not afraid to follow through on this threat,

I propose that we have all the fun on Saturday before Al get there. That'll stick it to him!


P.S. I can have some Meyer lemons for you on Saturday, becks. How many do you want?

Bonus Ransackedmedia post, Chris Macia ripped him a new one this morning.
http://ransackedmedia.com/2011/12/15/i-didnt-wake-up-this-morning-intending-to-piss-off-anybody-but-i-did-anyways/

I hope if I sign in these are links.

Maybe 15 lemons? It's not too early to pick them, is it? I haven't tested any yet.

hahahahahaha! The Crocker has a new glass exhibit with the unfortunate title: Red Hot and Blown.

It's not too early, I picked some last week.

Those links to the other blog are great. First that the guy is so pissed about 106.5 and the second post with his argument vs the Bee writer was nuts.

Time to write that Bruno Mars hits trilogy with lyrics changed to be about Hecksac. But for realz, Xmas show will be Bruno Marz free (Jay vetoed Grenade)

Namaste, Jay. Can that mean Thank You, too?

Re: Ransackedmedia. Nice blog, and looks like the owner is looking to monetize. I'm perplexed by the stampede towards hyperlocal journalism on the web. This year I got a job offer to write for hyperlocal tabloid customized for iPads and smart phones. It fell through, and I wasn't that surprised. Is there really a demand for hypelocal content beyond what the dead tree pubs and SacPress are already covering? I don't have any hard evidence either way, and anyone who did probably wouldn't share it, but my gut tells me it is a bit of a pipe dream.

Also looks like the blog owner just got into a pissing match with chris macias. Even bad publicity is good publicity.

That blog is annoying. I'm pissed I took the time to read the Hot Rods rant. 5 minutes I'll never get back.

Who knew Hot Rods was such an amazing institution anyway?

I'm looking forward to the retrospectives on hyperlocal news site rivalries in about 20 years. I figure it will be the Loft vs. Old Ironsides rivalry of the twenty-teens.

Thanks for sharing this song! Check out a cover of another Bruno Mars song! It's sung by an eleven-year-old boy named Max Petruzzi! http://www.youtube.com/watch?v=EmszsOCQ8wA