I wish I was eating a Morant's weiner right now 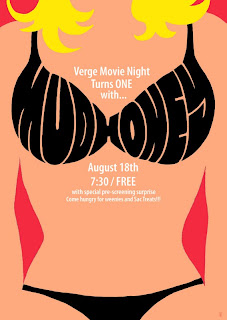 Check this cool poster that Matt K. designed for our film screening next week!NM wrote it up in the SNR and included a great graphic, too.  Liv, OMF and I went to the Yerba Buena in SF yesterday and watched some amazing short films that are part of the Smut Capital of America film series they are having there this month.  It gave us good ideas for our series and I'm happy we're echoing the sentiment with our own smut.  You Bay Area dwellers reading this should check out the rest of their calendar.  Here are the deets on ours, just to remind you:

Also, tonight at the Nelson Gallery is a series of discussions about Nate Cordero's show.  The mingling starts at 5, discussion between Renny and Nate at 6.  At 645, Chris Daubert (who helped install the show) takes a crack at it and at 7:15 Tim Foster will pontificate.

Saturday, more Davis shit: Charles Albright band at the DAM Haus with that goodtime party band Wounded Lion.  It's the second to last show at the DAM Haus, sad.  Also Saturday night, DJ Hailey's dance night at Fox and Goose.
Posted by beckler at 10:48 AM

you guys are boring

oh yeah, the Summer Ice Cream Social for August in this Saturday, all day at Ginger Elizabeth. This is the one I was most stoked about: raw milk ice cream, salty marcona almond sherbet, whipped saint-andre (isn't that a cheese?), local plum compote, caramelized pie crust, chantilly cream

In honor of my last DAM Haus booking ever...

I promise a giant vat of mac 'n' cheese at DAM Haus on Saturday.

I will not spare any cost for quality or quantity of cheese.

So come hungry...AND thirsty!
7:30 start. If the first band doesn't start right on time, just eat, drink, and be merry.