This is a kibbee sandwich from Maaloufs.  I interviewed Abdul Maalouf for SNR, so watch for that upcoming.  He is the best!  A fun interview, and I ate at Maalouf's three times in the course of trying to get the interview. 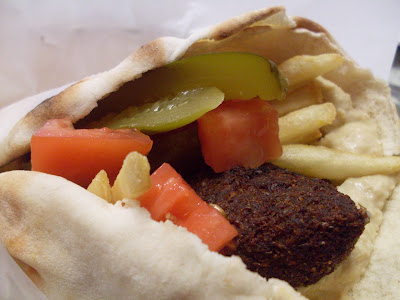 This is a Hitachino Nest beer that Burgers and Brew in Sac is serving.  It is aged in sake casks. It's 8.0% alcohol.  The Kiuchi Brewery website says it's available only in Japan.  Obviously not up to date. Now that I'm an expert in photoshop, I lightened up this dusk-time picture of Dreamdate playing acoustic in a Davis backyard. 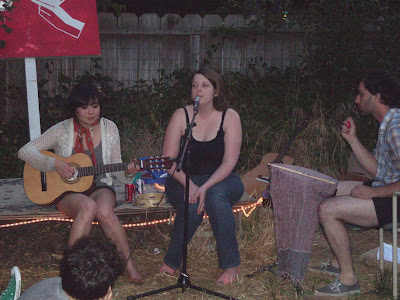 The Bruery event at Sac Brewing was fun, and they still have Bruery beer left, as well as Chouffe beer from their Chouffe tasting last week.  The two Bruery beers I tried were the Berliner Weisse and the White Zin.  Here's their description of the Berliner:

Hottenroth Berliner Weisse
Brewed in memory of my Grandparents (Fred and Sarah Hottenroth), this tart German-style Berliner Weisse is as authentic as it gets. We used lactobacillus and a hint of brettanomyces to sour this very unusual, low gravity wheat beer. To cut the tartness for those with sweeter tastes, raspberry or woodruff syrup is a traditional way to sweeten the beer. Almost an extinct style, we hope to help revive the Berliner Weisse in memory of two great people.

What an interesting brew!  So low alcohol, and the lactobacillus caused a different type of sourness than Brett.  It had almost no body, and little carbonation.

The White Zin is not on their website, but here's the description from the handout they had at the tasting:

American wild ale with fruit.  No, not the wine!  Rather, this beer is a blend of Cuvee Juene with our Zinbier, a Belgian blonde fermented with almost 1000 pounds of zinfandel grapes.  Ripe fruit flavors meld with the biscuity malt to create a unique flavor profile, accentuated by a refreshing acidity.  The perfect cheese beer?  Perhaps.  (ABV approx. 7.5%)

This was a tasty brew.  Some in our group felt it was equal to a Russian River sour, but I thought it did not appoach that level of magical deliciousness.  Speaking of Russian River, Sac Brewing has bottles of Consecration for sale for 30 or 40?  I can't remember, I know that's a big difference.

Dayrage 2: The Revenge of Dayrage is going on today.  Maybe I will get text updates.

The Kibbee sandwhich is my favorite thing to eat on earth. Nice pics!

for those of you keeping score at home, dayrage 2: dayrage against the dying of the light is currently at the Monte Carlo

Dayrage 2: Bustin' a dayrage has been bought a round of drinks at the Torch!

Gross! Apparently smiller ordered the "Marley nachos" at Dayrage 2: You Don't Have To Dayrage At Home But You Can't Dayrage Here.

Malouf`s owner remebered me after a 5 year absence of eating there awesome food. He also in the past would throw me alot freebies.Just saw an Austin news program about food trailers.They have all kinds of em`!!!
Jay