Last month's Gourmet had a salsa recipe that got me inspired to start learning more about cooking Mexican food, and I also went to the library and checked out a Dianna Kennedy book. One thing I learned is that the translation of "frijoles refritos" is closer to "well-fried beans" than "refried beans". They are only fried once, but the "re" on the fritos is for emphasis. The Diana Kennedy recipe is the bomb. This is the only time I've ever cooked with epazote, and I can't believe how good it is in beans! The recipes I've read all emphasize that epazote goes better with black beans, so I'll try it that way, but it was dynamite with pintos, too. I didn't get a picture of the mashed and fried beans, but the whole ones were also good. 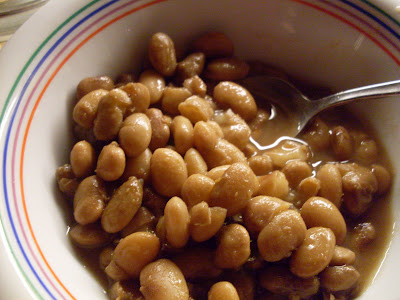 It was really fun going to La Superior and picking out fresh and dried chilies that I had never cooked with before. The prices at La Superior make me trip out on the fact that people think Safeway is cheap. Everything is like half as much!
The salsa recipe is not linked online, but I think I can sum it up. Count out about 40 dried chilies de arbol and de-stem them. Peel a clove of garlic. Roast the chilies and the garlic close in a medium-hot cast iron skillet for about 2 minutes-until they start to get black spots. Take those out and put them in a blender and throw about a pound of tomatillos in the iron skillet. 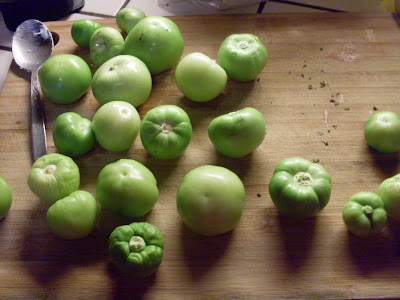 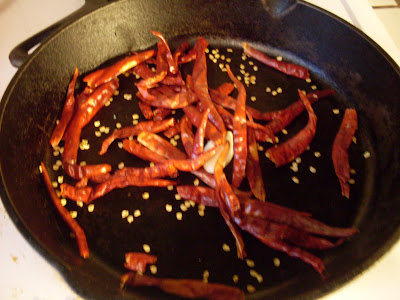 Keep turning the tomatillos with tongs until they soften and get charred in spots. Take out the small ones as they get soft. The big ones can be in there as long as 20 minutes. 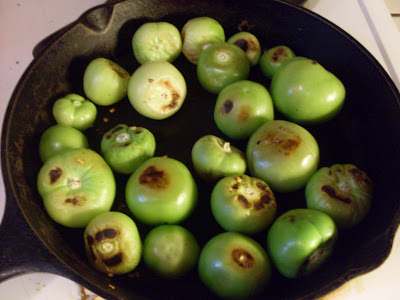 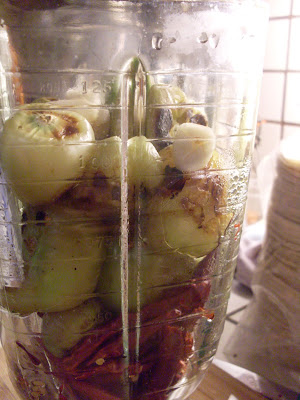 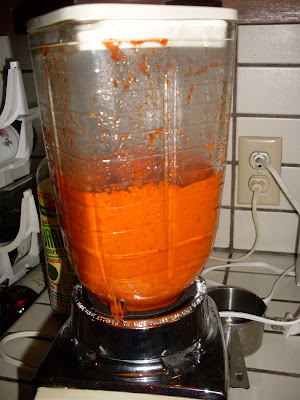 Over the weekend, I also created this kitten out of angel tears and fluffy clouds. 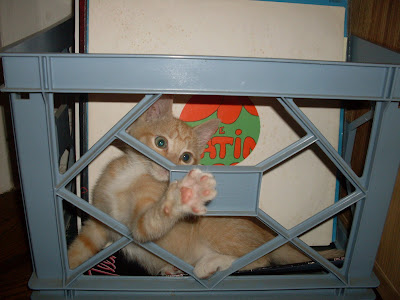 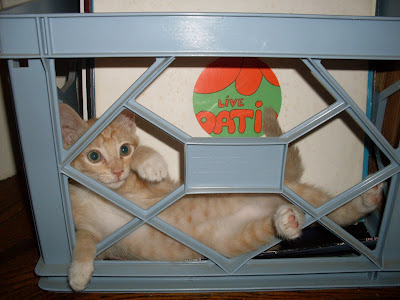 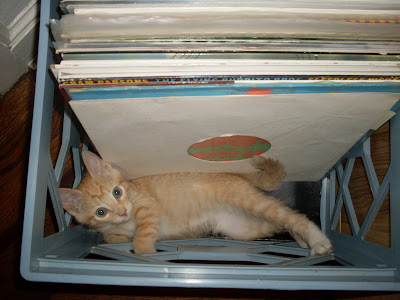 wait'll smiller and the kitty simultaneously figure out that LP spines make the ULTIMATE scratching post.

damn that kitten is cute.

MOM won a Sammie? Was she there to collect it? Who the Hell is "oustanding Sacramento band" MC Rut?

MC Rut = Middle Class Rut. Never heard of them, either, but their website says they're playing Reading and Leeds.

Your kitty is wearing kitty pajamas!

MC Rut is kind of awesome and kind of famous in England. They sound a lot like Jane's Addiction. They basically only play at the Boardwalk. Weren't you there when I was trying to convince the Armeniac to go see them with me?

Also awesome = kitten! I was just fondly remembering her sleeping on her back with that cute smile on her face.

yeah mom was there she handed a note for the emcee to read but i can't remember what was on it. i hear she sold the award?

That salsa recipe works great in a pinch with canned whole plum tomatoes.

Those dried chilis great. Super cheap at most any non-union mercado (which is most, hence the prices v. Safeway) and nice to experiment with. I haven't bought chili powder in a few years because it's so much cheaper and tastier to make your own.

trying to grow tomatillos in nairobi. just harvested our first poblanos, which were frickin stellar.

I hear these amulets have a +2 to the effects of brew. They also have a charm effect on Russian-Jew women.

ps. I just had lunch with my favorite teach from high school and it was the best! Thank you facebook!

African merch does take things to the next level.

That is a frickin' adorable cat. I like MC Rut. But I still like Jane's Addiction, too.

I liked almost all of MC Rut except the drumming, the classic destroyer of modern rock music. It's good to here a Jansey band every so often. Not as good as Hearing Jane's all th ef'n time!!!

what's with all this "frickn" and "ef'n" on heckasac?! This is an R-rated blog and I strive to keep it unsuitable for children. Fuck Hell Damn. See?

Jane's Addiction was great... but the Jimi Hendrix conundrum may apply to them as well: Jimi Hendrix was great. conversely, almost any band with a heavy Hendrix influence sucks ass.

Becky,
Stick with Diana Kennedy and you can't go wrong. Rick Bayless' recipes are hit or miss. Try that salsa recipe with Cascabel chiles or Pasilla de Oaxaca (available online at gourmetsleuth.com)--they are the best! You might need to add a little water to get the right consistency.