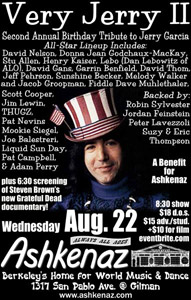 Scott and I went to see an event called Very Jerry 2 last night.  It was kind of a mixed bag.  We went to see the movie screening called "Steve's flashback movie".  You can see on the flyer that they billed it as "a Grateful Dead documentary" and boy is that a stretch! There was some Dead footage, and it was rad.  My favorite stuff was the parking lot footage from the early 80s, talking to people about stuff like their favorite Dead lyrics and showing the crazy hippie vans and such.  But then it would be intercut with excruciating Ramblin' Jack Elliot footage or Bonnie Raitt from the 90s.  Oy.  With no rhyme or reason.

Then, there was a concert.   At least Donna Godcheaux was there, that was kinda cool, and the guy who does Dave's picks was the m.c.  This probably won't mean  much to most of you, except OMF, who will be thrilled.

Dick's picks? Or is Dave's picks something else?

Dave's picks is something else. David Ganz. He hosts a weekly radio show. Which we don't get here, cuz Sac is bullshit. It's broadcast in Pt. Reyes and Chico.

P.S. it's making me sad but between our corrupt mayor and the stupid railyard/amtrak shit, I'm starting to hate Sac. I need some good Sac times to boost me up.

When Dave's Picks was announced the deadnet message board was up in arms that it wasn't "Dave's Fave's instead. Best part of the movie was some 80's (?) clip of Tom Constanten playing Dark Star solo on piano. Maxwell would've gone buck!

For the record I would've stayed for this while thing but Carol King wanted to leave.

You wouldn't believe how much payola I have to send in to keep Dave's Picks off the air in Sacramento - but it's totally worth it!

my back hurt! all the old hippies were taking up all the chairs.

PLUS we were in Berkeley, and at 1030 they announced they were almost a third of the way through. Scott is just mad because he was making lots of friends

Constanten is my constant. Fave Dead T shirt ever.