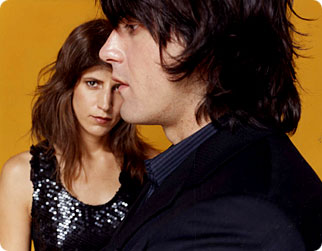 Me and smiller are going to see the Fiery Furnaces at the Fillmore tonight! I'm going to be soooooo tired at work tomorrow. I guess they've been playing two hour sets lately. I'm really excited.

We checked out 58 degrees last night. We sauntered over there after nine and got a seat out on the patio, which is really nice. The weather was totally perfect and 18th street gets minimal traffic at that time. The only distraction was this table of dudes that was having a dick size contest. You know, guys that are "friends" but their convo consists of bragging about the size of their house, their boat, how many chicks they've bagged, and mentioning how often they eat at Ruth Chris and generally just competing to see which one can sound like the biggest knob. We perused the wine list, ordered a glass of red and a glass of white (a french sauv blanc and a glass of chianti), and also ordered the charcuterie plate and the house bruschetta. Both plates of food were very good. The charcuterie came with two types of preserved meats and some strong and tasty parmesan slices. It also came with some rather blah artichoke hearts and the bread was a bit soft and characterless, and there wasn't quite enough of it. The house bruschetta had a strong cilantro flavor and a bit of a vinegary bite, and came with a tastier bread. Later we finished up with a glass of viognier (also french) and a glass of spanish wine of a type that I'd never heard of (it's a blend of granacha and carinena I guess?). Wine is so crazy! We were tripping on the fact that even though both of our glasses simply stemmed from grapes, my white tasted so much like a Belgian beer with an aftertaste of cotton candy and scott's red tasted and smelled strongly like tobacco (the good kind of smell of an unsmoked cigarette). We sat there for about two hours without feeling rushed or hassled at all. The posted hours said that they close at 10 on monday-thursday but people were still arriving when we left at 1045. It was nice to see people having fun out that late on a weekday.
Posted by beckler at 10:02 AM

FYI, garnacha and carinena are the same grapes as grenache and carignan, and I remember Becky that you two were pretty into grenache recently.

Priorat is a new/old region south of Barcelona. It was an old-school region that was abandoned, and recently rejuvenated. There are all these old vines with low yields (meaning they don't produce very much fruit, which is good because the nutrients and sunlight don't get spread too thin among tons of bunches) so they get a lot of character out of relatively fruity and simple grape varieties.

Anyway, I'll can't wait to see all my homies!

Wow, that place sounds great! Do you know anything about the wine store deal that is opening up on 15th and Capitol?

I thought that one is affiliated with Aioli? Maybe it's stalled a little bit, but I think they're the ones opening it.

I've only had an outstanding time at this new 58 degrees, and I'm taking everyone I know there. So many cool wines in such a cute spot. Why don't they make more of these?