Is it coming back? 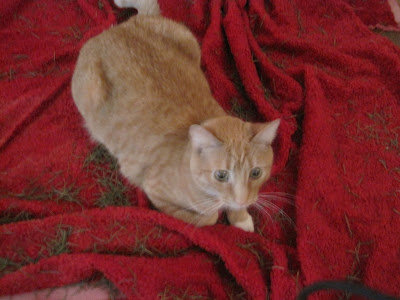 I call this picture "where the fuck did the Christmas tree go?" She's obviously suffering from post-traumatic stress.
Can I take a second to salute DJ Rick for all his tireless hard work in almost single-handedly being the bedrock that the Sac music scene rests on? He managed to pull off a night of two shows (although he didn't book the one at the DAM house I don't think) that resulted in a sell-out crowd for the Saturday late show at the Hub. And what a lineup! Man, the Mantles killed it. I liked White Fence but missed about half their set. And then The Babies were so good, too. Thanks Rick!
I guess the guy in White Fence (who is the brother of one of the guyzz in Nodzz-he's also in White Fence) has a side band that is popular, like on TV, in a Target comp., etc. Here's a video of his other band, Darker My Love. Isn't that a totally emo name? But they're not emo.

Emo-band-name band is pretty good, too, but GODDAMN...that White Fence will be the band to beat for 2011. That shit totally ruled!

Thanks to everyone who came out to the Hub on Saturday. It seemed like everyone had a great time, and I did, too. Shows have been getting less and less stressful. It's great to have people coming back.

Next fun thing: Wed 1/12 w/ Nacho Business & the Sleepies from NYC, and a new Sacto band called Teef who sound like fun. And the next big thing is Ty Segall on Tue 1/18. Dude's got it all. MVP of 2010. Can't miss that guy. His band is tremendous right now, and they're really on a roll!