I just got back from out of town. In case you're wondering, the California coast is still the most beautiful place on earth. That probably sounds smug, but my point is I never take it for granted. I marvel every time.

First things first: do you guys have a good recommendation for where to get houseplants?  NOT succulents or cacti.  Home Depot's selection is so boring and local nurseries have such a small selection (RIP Capital Nursery, but you were very expensive.  I know, I'm sure it was because of high quality)

Oh Sacramento, you will never change your janky ways.  First a place with whiskey on tap, then this?  The best is that this same location housed that piano bar, Twisted 88s that I wrote about like 6 years ago and that place was BIZARRE. Wasted people, dueling pianos, Elton John songs changed to be about gonorrhea? (if I remember my review correctly).  And then it opened as the all-you-can-eat sushi bar/night club with the Spanish name, Azukar.  Spelled incorrectly but it was still funny.   Weirdest building in Sac. 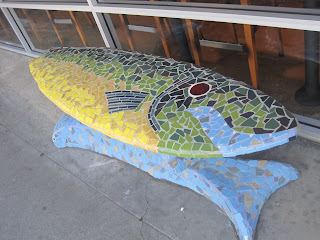 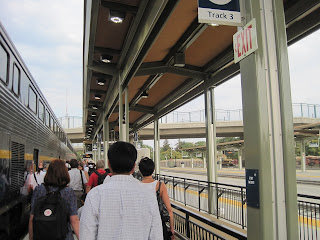 I was taken by surprise by the new platform situation at the Sac train station.  I had heard but I forgot.  At first you emerge and it's all cool.  Feels like a big city.  And then you walk. And walk.  Part of it through ugly netting, because it's still under construction.  I don't really care EXCEPT that it adds to the already annoying bike commute (annoying because of the giant construction site on H) because I can't ride my bike through any of this.  Before I could zip up quite close to the platform, as long as the overbearing train volunteers didn't spot me. 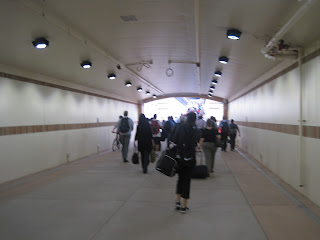 This will be rad once the lightrail stops at different gates. 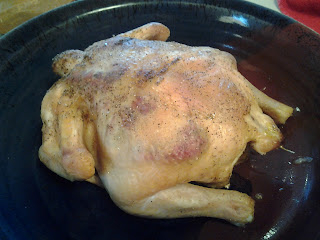 Last, I roasted this chicken with sausage that Skipper made me for my bday stuffed  under the skin.  He made a loose sausage that was one of the best I've ever had.  Pork shoulder, garlic, and sage.  Really fatty, which helped make this chicken juicy as hell.
Posted by beckler at 9:06 AM

Cuban oregano is the easiest thing ever to grow, it's fuzzy and soft, smells amazing, and grows like a dream through all seasons and conditions.

I am also a big fan of coleus, either indoor or out. They grow well from seed and are striking.

It's news to me that Capital Nursery is shutting down, but I shouldn't be surprised. Last time I was there the selection was sub-par than usual. Still, sad stuff.

As for plants, I don't buy many houseplants. I worry about my herd of cats eating them and conjuring up an enormous vet bill. I'd probably have more house plants if I had higher places to put them.

A good place for plants is Emigh's / Ace Hardware. The Davis Ace has a really good selection too. Both stores have a whole section of indoor plants.

It's kind of bad timing, but my favorite place for plants indoor and outdoor is at the Buddhist church events. I got a full rose bush there for $13 last weekend and a great spider plant and some dahlias for cheap at their garage sale in the spring. Other than that I just pick them up piecemeal here and there.
Last weekend Muggs was like, "Man, I wish there was a piano bar we could go to." I had to break it to her gently that she had missed it by 6 years.

Is there still piano action at the Backdoor?

I think Dive Bar does cheezy piano nights with joke songs, etc. I was in there once when it was going on.

I still have not been to Dive Bar. I'm not avoiding it but the opportunity has yet to arise. It may become one of those things where if it doesn't happen on it's own long enough I'll just decide to say screw it. Although I suppose that's me assuming it won't be around all that long.

I think it will be around. I think people from the suburbs go there for a night out.

I always go the Green Acres for plants. (8501 Jackson Rd. (at the corner of Florin Perkins). Huge selection and fairly reasonable prices.

Capitol Nursery, although close to my house was simply too expensive and there service and selection was really lacking. I'm not sorry to see them go.

green acres is a good idea.

Green Acres is the place for you?

I love Fair Oaks Blvd Nursery, right by Arden Hills. I don't know about their indoor selection, but they have great outdoor stuff. I was really surprised.

I'm sad about capitol nursery closing, not because I shopped there alot, I just like the way it looks from the outside. Did you know Panama was shutting down as well? The recession has finally hit my hood.
jamattack!

what, no "loose sausage" jokes?

I'm glad I'm not the only one who was hoping for a loose sausage joke.

Last time I was there, everyone refused to take me to the Dive Bar and the new sketchy bar by the Old Tavern. I'm not setting foot in that town until someone promises both.

Didn't everyone refuse to take you to the Dive Bar because the original price of your jeans was under $200, and your tan needed to be 400% oranger?

No promises on the Dive Bar but I'm always down to take people to Alley Katz! Still waiting for anyone I've taken there to ask me to take them back.

I STUFFED the LOOSE SAUSAGE in the GAPING CAVITY. Are you people happy now?

I would like Scott Miller's curated tour of Alley Katz beer menu complete with erratic pricing.

Who knows, you might end up with a beer tower of beer with a 10% abv, aka "headache tower"

That would be great. I also hope I pay about $19 for it and that conversely whoever I'm with get' grossly under charged. It's like the lotto.

Don't forget last call at 10 where they sell you a beer, dont tell you its about to be last call and then moments later take it out of your hands.

wasn't that like the first week it opened or is it a regular thing? now it's probably secretly serving beer until 4 am, or maybe alternating between those two things