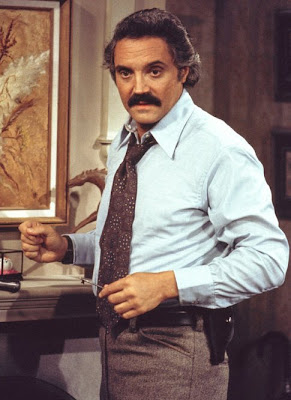 I had a lot of time to think today because the fucking train was 20 minutes late, and I was musing about how my favorite conductor looks like he would be on Barney Miller. Did anyone else have a crush on Barney Miller? Also, does anyone else remember the creepy episodes of Barney Miller, which as far as I remember both starred a Russian guy (Mr. Kopeckne-thanks wikipedia). One time he thought he was a werewolf and one time he was possessed? The possession one scared the crap out of me. I remember him hanging upside down in his cell. At least the Barney Miller conductor guy deliberately didn't punch my pass to make up for the train being late. They don't punch my pass about a third of the time, which makes the train a considerably better deal!

OK, so I think Delta of Venus is stepping in to save the day while Fools sorts shit out, right? There is also a saturday show there where Fursaxa is playing, if you like trippy shit. They have a nice looking new single out on Mt. St. Mountain. Speaking of trippy shit, the Italian Sub Pop band Jennifer Gentle is making a return visit to the area and playing at DOV on thursday the 9th with Agent Ribbons. That's a good show. What would we do without DOV?

hopefully mikomiko wil be playing with RtL on mon the 6th at Club Pow. The Big Show is workin on it.

Barney Miller is one of the great TV comedies of all time. Plus, the theme song is fun to play on the bass strings.

--viking in the woodshed

i think larry r. is working on trying to get that m.m. show at the horse cow too. hopefully someone gets it settled soon people can get the word out in time.

the fursaxa 7-inch is only 8 min. of music but it's cool:
http://www.newsreview.com/sacramento/Content?oid=359783

fursaxa isn't a they she's a she

Barney was cool, but I think Wojo had the mojo and Harris was smooth as Glass...

I had a crush on Wojo, too, kinda.

I love how most of the cast (except for Ron Glass) had that really beaten-down-from-living-on-the-east-coast-in-the-1970s look. Especially Detectives Fish and Yamada and Inspector Lugar!

the conductor on amtrak reminds me of a slightly younger fish.

Hal Linden is handsome, but not sexy.

Ron Glass could be sexy, if he got a haircut.

Whoa-oh, you're dissing my Wojo.
And I dunno, Hal's got those "eyes", ya know. And Ron's hair was pretty danged stylin for the time.

Put keep in mind this from is someone who thought "Andy Travis" (Gary Sandy) was *the* ultra-super-hottie of WKRP.

I can't believe nobody mentioned Fish or Jack Soo.

Interesting bit of trivia: Real cops overwhelmingly agree that Barney Miller is the most realistic portrayal of life on the job ever aired on teevee.