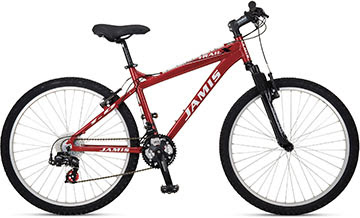 I won this bike from the co-op. It's a mountain bike, and I don't need a mountain bike. Also, it has a small frame, like for a woman-sized woman. Not a tiny, petite woman, necessarily, just not someone 5'9" or 5'10". It retails at B and L in Davis for $284.99. I was quite lucky to win it, so I would like to pass my luck on to you. I will sell it for 200 bucks. Anybody want it? I see that the B and L site has different-sized frames, so if you tell me how they get that measurement, I can give you the exact specs for this one. It's red like in the picture and has not been ridden except home from the co-op.

There's an important city council meeting on thursday Sacramento's firefighters need for you to attend. Here's the pertinent information:

SAVE OUR FIREHOUSES!
Tell City Council “Don’t Close our Firehouses!”
Thursday, June 12th
6:00 pm, Agenda # TBA
Sacramento City Council Chambers, 915 – I Street
For questions, or to RSVP
Please call Sacramento Area Local 522 at (916) 739-8522
1. Join Sacramento firefighters at Thursday’s City Council meeting:
Your firefighters need your help to convince City Council that we cannot afford any more budget cuts.
Firefighters will be on hand to provide “Save our Firehouses” stickers to wear and to distribute forms for those
who would like to express their support of SFD to the City Council.
We will have sample statements available to share with you at the meeting or we can e-mail a draft to you ahead
of time. For those not interested in speaking but who would still like to show support, please join us in the City
Council Chambers and wear your sticker! Questions, concerns and RSVP can be directed to Sacramento Area
Local 522 at (916) 739-8522.
2. Call your City Council Representative or Write a letter to your City Council Representative
Office of the Mayor and City Council
City Hall
915 "I" Street, Fifth Floor
Sacramento, CA. 95814
Main Number (916) 808-5407
FAX - all Councilmembers 264-7680
www.cityofsacramento.org
Mayor Heather Fargo
District 1, Ray Tretheway
District 2, Sandy Sheedy
District 3, Steve Cohn
District 4, Robert King Fong
District 5, Lauren Hammond
District 6, Kevin McCarty
District 7, Robbie Waters
District 8, Bonnie Pannell
BACKGROUND
The proposed budget cuts call for a 6% ($4.2million) cut which is to be accomplished by
“browning out” 3 companies a day.
The SFD budget has never recovered from previous cuts.
The Department has the same level of resources it did 20 years ago even though the city
population has grown by 40 percent and call volume has increased by 100 percent.
Sacramento’s fire death rate is double the state average and the city has about 40 percent more
fires than similar sized cities.
• If this plan is enacted, response times will increase overall by at least a minute – which is
a dangerously critical amount of time when a family member is suffering a heart attack or
other life threatening event.
• Every fire station in the city will be subject to rotating closures – every ten days. During
closures local neighborhood response times will be delayed significantly.
• And even when a local fire station isn’t closed, its crews may be forced to respond to
emergency calls for a station that is---resulting in increased response times in the
neighborhood.
The Sacramento Fire Department (SFD) budget has been chronically under-funded for many
years.
As a result of high call volume, firefighters are stretched thin and work harder today than ever
before.
SFD personnel have been doing more with less for decades. This is not the time to cut funding to
the SFD. This is an issue about the safety of every firefighter and every citizen of Sacramento.
For more information, call (916) 739-8522
I can't attend this, because I have Midtown Monthly business, but I am going to write the mayor and my city council person a letter today and let them know that they can expect big protests and major bad press if they enact their plan.
Also, don't forget, Ganglians, Psychedelic Horseshit show this thursday, too. It's been moved to Bricka Bracka.
Posted by beckler at 11:38 AM

in the parking lot:)

on a yoga mat?

p.s.-
cuz i don't want to look it up for the 20th time, does anyone know who the blvd park city council is? rob fong?

I think it is Steven Cohn.

It's either Tretheway or Cohn, depending on where in Boulevard Park you live, but it probably can't hurt to check the City Council's "find yer dude(tte)" page here.

I don't want to see the fire department cut either, but do you know if the firefighters are proposing $4.2 million in new taxes to prevent that, or are they just trying to get the Council to take that cash out of someone else's budget instead?

The City of Sacramento has 20 million dollars in reserves and 10.5 million in economic uncertainity reserve ("Rainy Day Funds")that could be put towards the 4.2 million cut to the fire department. That's what a rainy day fund is for, and we consider keeping fire stations open in the interest of public safety is an appropriate use of that money. The city plan of "browning out" stations is nothing short of rolling the dice each day in 3 different Sacramento neighborhoods and hoping that nothing tragic or catastrophic happens. Understandable as a solution in the abstract, but not so abstract if it's your house on fire or your relative having a medical emergency. Beckler, you guys are right on the line between Cohn and Trethaway, so you'll have to look it up on the city website. But your fire station is Station 2 on 13th and I.

For more on all of this, and to put your two cents in, please show up to the council meeting on Thursday.

Having Fire Fighters is crucial! Especially when your house is involved in a fire, like when the place I lived in was engulfed in flames last year, it was during that huge mass of fires in Southern California. There was already a shortage of fire fighters in the area, and we kept hearing stories that the fire fighters got to the house later than usual due to that.

Think of the potential mess if we are permanently understaffed with fire fighters?

The Sacramento Fire Department from my experience has done great work- at our place, they even saved a bunch of our stuff by throwing tarps over what they could including my couch, RECORDS and other things. They even stayed and helped us salvage things.

I am pro-fire fighter. Sorry I missed the meeting, I had to produce my radio show.

The meeting is tomorrow, you didn't miss it yet. Maybe you can still go?

HK- PLEASE come to the meeting! We need folks like you to put a face and a voice to our arguments against cuts in service. In our dealings with the City Council recently there seems to be this philosophical disconnect, an almost creepy inability to look past the dollar signs to what the real, human impacts would be if they closed three firehouses a day. We would sure appreciate you telling your story to the council!

Has anyone let the city know that they can & will be sued for any damages caused by delays due to shutting firehouses? They're gonna potentially be liable for a lot more than 4 million.
(It's the "human impacts" that matter, but even if the city only sees it in financial terms, they're still making a huge mistake. Be sure to get Fargo & anyone running for re-election on the record about this one, and let them know you're doing that.)

Maybe it was from their recent 10 percent pay hike?

what was from their recent 10 percent pay hike?

this got passed, and now the city saves some dough by rotating closures.

Two points from the article:

1. The city had already planned & budgeted for the increase.

2. Sacto firefighters (pre-raise)made about 22% less than those in nearby areas. Even with the raise, they are still underpaid by regional standards.

I would love to see a little more oversight on that end....

Before you go taking this the wrong way, let me explain myself...

I am blaming the city for these actions and not firefighters. The city is the one who allows this to happen. All civil servants do as they are commanded or allowed. When you have a city that says making revenue is more important then fighting crime, you have 3/4 the police force on traffic duty like we have here. The same goes for firefighters. They give them a raise and then screw them some other way. Or don't give them the ability or tools needed to adequately fight fires or the management to see that they are functioning properly.