It is way too gross to say I partied like a rock star on Saturday, but I came the closest that I get (actually it's so gross that I want to erase that).  I paid for it yesterday, but that only happens maybe twice a year so I think that's ok.  Maybe three times.  I know it's strictly a coincidence, but it's usually when the Mantles come to town, weird.  Those guys are all super quiet, go-to-bed-early types who never bring over a case of beer and three frozen pizzas at one in the morning so I wonder why.

You know what sucks the most about having an indoor cat? The constant fear of the cat getting out when you have a bunch of people staying at your house.  It's very anxiety-producing.  Like dreams of her getting out and stuff.  All that worrying, and when we went out to brunch it turned out that the downstairs window was completely open for hours, no screen.  Babs was just sitting by it, but with lots of cobwebs in her whiskers, so who knows what she did and where she went.  Maybe she "went to town", like in the scene from Wet Hot American Summer above. Oh, I see now blogger will no longer embed youtube clips.  Don't make me switch to wordpress, blogger, I'm warning you. 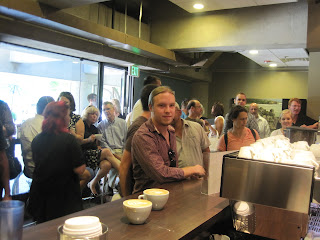 I judged a latte art contest on Saturday at Chocolate Fish.  Silly, kinda, but it was pretty cute that they took it so seriously and got really nervous and shaky.  The guy above took second. 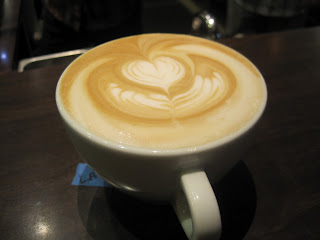 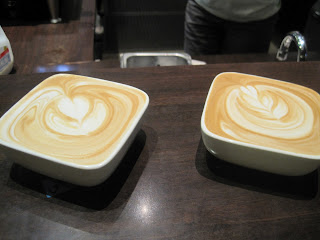 A couple of weeks ago I came home around 11pm and saw a cat slinking out from under the van parked in our driveway. I thought, "I've never seen him before" and when I got closer I realised it was my own cat. He had opened the sliding back door with his paw and walked ALL the way to the front of the house. It sounds lame but I was shaky and thought I might cry even though he was safe.

I wish I had made her an outdoor cat, but she was soooo tiny when we got her and by the time I could have I loved her too much to let her out into the cold, cold world. Maybe when we get another cat soon (this is news to Scott) I will adopt one that is already an outside cat, but that would make Babs even sadder I think.

Outside cats have only one fourth the average lifespan of an indoor cat, so that's enough to convince Melissa and I to keep Ree Ree, Tulu, and Bobo inside. They've gone through phases where they seem more curious about the outdoors, and sometimes even curious enough to try to squeeze through a door just as it's opening or shutting. But in the rare instances that any one of them has gotten outside, they seem to get so overwhelmed, they just stop on the edge of the porch and scurry back inside. Maybe three times, Bo has made it under a car or through a short hole in the fence and into the backyard. Those are the worst times because he seems scared enough of everything that he might react unexpectedly and go get really lost.

Actually, the worst time ever was noticing a wide open door when the band known as Puffy Areolas were staying at our house. Melissa had gone to work, and I had the day off to prepare for our massive Oregon Outback roadtrip. I shut the door and ran all over the house taking kitty inventory. I found Bo and Tulu and cloistered them in the bedroom. Then I ransacked the place looking for Ree Ree, but she was nowhere.

Then I got the entire band involved in searching for her. Imagine the most frenzied scuzzed-out sludgepunk menace of a band from post-apocalyptic Toledo, Ohio, walking around my entire neighborhood sweetly calling "Here, kitty kitty....Ree Ree, where are you?" I was sure I heard some movement way up high in a 50-ft-tall Italian Cypress, and I felt helpless to lure her down. Oh, and it was already 90°F at 10:30 am that day, so the band looked like they were about to melt.

I went back inside to ransack some more, and then I found her in the only place where I hadn't looked once (I'd checked most other places about five times each)...she was curled up in the empty space of a half-packed suitcase. I don't know if I've never felt more relieved.

ps That's gotta be the longest Rick post that didn't make any mention of burritos.

this should be a specific post on termbo: crashing bands letting your house cat out

I think there is an argument to be made for quality of life in outdoor cats that balances the reduced life expectancy. But I haven't made that argument to myself, as my little dude is strictly indoors.

And yes, the one time he got out and I couldn't find him for days on end was because of a band crashing at my house. Screw you, The Rapture!

Ragu has gotten out a few times but he just runs down the stairs, takes a look at the scary street and runs back up. Only once did he go all the way to the tiny alley by Capital Tea Garden.

In other cat news: I have a friend giving away kittens if you want one!! There's also the Mama Cat who is super friendly. They've had their first shots.

Ha!
I remember that the joke in the early aughts was that the guy who did cowbell or hit a drum now and then in the Rapture was the luckiest guy (because they had a pretty big record deal)

I agree about the quality of life, because she spends so much time staring at squirrels and birds and other cats and looking at me like "help me out here!" that it makes me sad. However, my life would have way lower quality if I was scraping my cats entrails off G st.

I'm taking the opposite stance here. I think cats are meant to go outside, and I let mine have free reign. One practically lives behind the shed, the other chooses to mostly stay in. Also I don't think it's so much that they're outside that reduces life spans, all the cats I grew up with lived to be 18-20, and I've known plenty of indoor cats that lived half that. As long as you have a yard they can hang in away from cars and get them their shots etc., I don't think their life span is affected at all, or perhaps even increased becuase they're less likely to be obese.
cat lover jamattack!

I let my three cats roam pretty freely, but then I live at the end of a dead-end street next to a cemetery in a sleepy small town. Keeps 'em happy because they get to kill lots of mice, as well as birds (sorry, Jonathan Franzen). There's skunks to contend with, but they've gotten wise on that.

Black Francis has to be an outside cat or she's drive us all mad with her incessant howling. I think her life expectancy would dramatically decrease if she were in my house 24/7. Plus, she likes to kill rats.

I can see this is a controversial topic and there are many strong feelings on both sides. I think Sting said it best when he crooned so beautifully "if you love somebody let them free, and then if they don't come back, hunt them down and kill them in the dream of the blue turtles tantric sex remember how the Police were really good I own a Tuscan village"

Then, on the other side of this are the feral cats. My lame-ass hippie dipshit neighbor refuses to do anything about her cancer-ridden (huge tumor on the side of its neck) 'free range' cat that she basically just dumped in the neighborhood. Super sweet cat that lives under my car now and shits in my backyard every day. Other neighbors have tried to take it in and the 'owner' got all aggro that they were stealing her cat.

On the other hand, it won't be a problem much longer since it's getting skinnier every day. It's gonna be great when Liv and i are trying to figure out where it is by smell. grrr.

Oh yeah, I just remembered...It wasn't the Puffy Areolas' fault that the door was left open. This was back when we were renting a room to a certain Ganglians guitarist. Gotta love that guy, but that was one of my biggest worries about him living there.