Well... a police captain called me about my email and apologized so profusely that it was embarrassing.  I definitely accepted it.  She said she doesn't know how it's possible that I was not notified of the video  release and that the responding officer did note the camera in his report but that the detective somehow failed to see it in his supplemental materials.  She said the detective is beating himself up about it.  I know they are trying hard but at this point they seem to  have nothing to go on.

Deadheads, I have one date for you: 11/17/73.  Go to deadnet and get stoked.  It was a Dave's pick, but sold out quickly, unfortunately.  Bill  Walton was there and wrote the liner notes.

Speaking of the Dead, we went to Berryessa Brewing yesterday and got a little tour of the back and OF COURSE there was a Steelie on the door. The Dead/brewing connection is a given.  I have to tell you, this guy is a fucking GENIUS.  Run, don't walk to this brewery.  Hopefully he is gonna do big things.  He is ambitious and a workaholic so chances are good.  A few spots around town have their beer, notably Bows and Red Rabbit.  He can do almost any style and do it well.  He has a killer IPA and seems to be able to nail Belgian styles so that they taste Belgian.  Genius brewers are few and far between.  Many think they can brew but so few actually can.  I am giving you a sneak peek of my SNR piece on his right now. 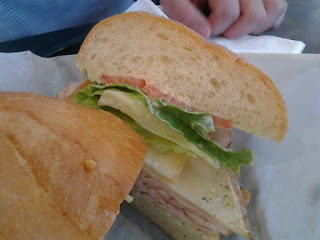 We were walking to Magpie on Saturday and took a route that took us past the new Zia's, which does have some limited weekend hours.  It's right next to Yellowbill.  The Yellowbill concept still confuses me, but I guess if it works for them...As I said, their sandwiches are really good, and they are cheap, around 6 bucks if you can believe it.  They are total old-fashioned deli style, but with a quality twist, like Molinari salame and stuff. 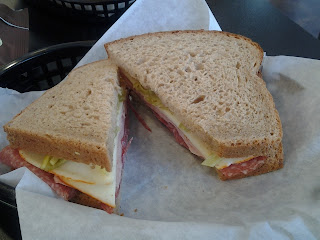 This one has salame and mortadella and I added pepperoncini.  It's no mayo, just oil and vinegar.  I got wheat sliced to reduce the carbs, obviously! 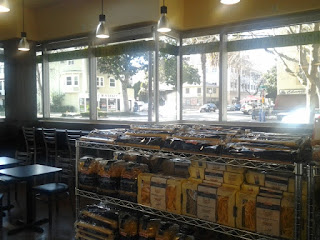 It's also like a cute little market with good pasta and canned tomatoes and stuff.  It's actually the closest market for us with stuff like that. 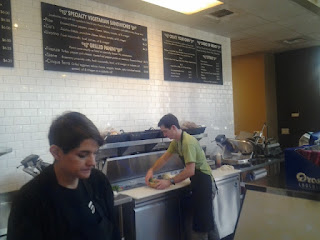 The guy in the green is the son of one of the owners.  It's a proud family business since the 70s, I think, and they are Italians. 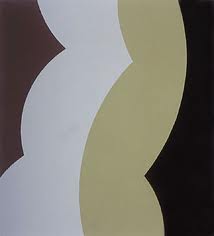 I have to say that the Pete Stegall piece was the most gratifying I have ever written.  He was so stoked.

In other  local art news "agitated rocker" Jose di Gregorio has a solo show at the Indianapolis Museum of Contempory Art.  Here's a review.
Posted by beckler at 9:32 AM

Berryessa have any of their triple IPA at the source?

The link to the Jose review didn't work.

I meant to say how much I enjoyed the piece on Peter. I think it struck the right tone. And he was stoked.

yes, he had the triple on. He gave me a taste of an incipient barley wine that was delicious. he is going to barrel age it soon for 6 months or so.

I'm happy to tell you that for Beer Week, Chris and Berryessa will be pouring at Bows and Arrows on Tuesday, February 26th. The Alkali Flats will be playing hillbilly music and Cactus Pete Stegall will be spinning 78's. Should be a great night!

Yeah, Chris M. told me about that. That's awesome!