sorry I just can't hold the sarcasm back 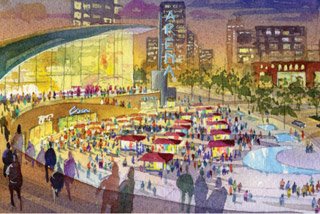 This is the bass fishing thing that SM was talking about. Suheil Totah is quoted once again about how great this is for downtown. And this guy was JUST quoted in the Bee about how the whole community wants an arena. Who exactly is this oh so quotable pundit? It's a little hard to unravel but I'm trying. About a year ago he was appointed to run the Sacramento division of Millennia Sacramento (parent company is mega-developer Thomas Enterprises). I guess before being hired by Thomas, he was employed at this law firm (maybe not, it's confusing). You can see a picture of him and look at that impressive list of what he's had his hand in in Sac! Wow, he's a busy guy. Hey look, he helped develop Twelve Bridges in Lincoln, so not only is he shaping the town where I live now, he even helped fuck up my home town until it's one disgusting strip mall! (sorry for the sarcasm, I'll try to just present the facts now).

The Bee article is also confusing. So Thomas Enterprises does not yet own the railyard? They're sure acting like they do. They have a jaunty little website that flashes buzzwords like "urban" and "revitalization", "yuppies only" at you. Wait, did I really see that last one? The drawing I posted is an artists' rendering of the magical fantasy land that they have envisioned, full of semi-transparent people whose pockets are stuffed with money, wandering to and fro into the canal-side cabanas (that's what it looks like, anyway) and frequenting the arena that features such world class events as a supertour with R. Kelly, New Kids on the Block, and Ted Nugent (three of my faves).

But at least the article ends with a Suheil telling a joke,

Totah said Bass Pro hopes to open by 2008. In order to meet that timetable, Thomas Enterprises and the city will have to make fast progress on completing the purchase of the railyard, cleaning up environmental toxics, building new infrastructure and widening and extending streets to better connect the rail yard to downtown and to Interstate 5.

Yeah, better get right on that. Should be a snap.
Posted by beckler at 1:18 PM

Yea...seems like it's all talk. Haven't a bunch of proposed developments on that site been abandoned due to the overwhelming cost of environmental cleanup?

For the record: I'm not fer BPS, I'm agin' it. Most serious/tournament bass fish'n guys compare the BPS empire to Walmart (ie, generic, predatory, etc) and choose to support the specialty/independent/small businesses for their fish maiming equipment.

I love that there is even a fishing business expert reading Heckasac! I never would have known that about BPS.

Hey, that's not the rail yard in that rendring, that's actually the proposed Marina Center in--
oh wait; damn, why do all artist's renderings of mega-developments all look essentially the same, with wispy, bluish stick-figure people mingling around courtyards with sort-of table things, some puffy green trees here and there, some blurry neonish touches and a glittery dusk as a backdrop?

Don't take this as the gospel truth, but I've always been under the impression that Southern Pacific turned over management of railyards to the Railroad Museum. They've been trying for a really long time for some kind of deal (including one of the attempt to turn it into an arena for the Kings and getting on a proposition ballot that the Planning & Conservation League had about safe school buses), not just because of the environmental clean-up costs but also because a long-standing plan to expand the museum over to that side of I-5.

Man, I clicked on that railyards link, and that classy jazz had me sold! BRING ME THE BASS PRO! Doo wap a doo wah. Yeah, I'm goin' to bass pro. Ske bop a hey-hey.

I also love this quote from the Bee article:

As much as I dislike the monolithic Bass Pro Shops empire, their Springfield, MO flagship store does hold some appeal for them's that drive a glittery bassboat/own a pickup truck/tote guns (and I think Sac does have that demographic):

"For the best in hunting and fishing gear, shop Bass Pro's sporting goods store in Springfield, Missouri. Featuring everything from salt water and freshwater aquariums, indoor waterfalls, live alligator snapping turtle exhibit to archery and pistol ranges, arcades, barber shop, and restaurants, the Bass Pro Shops retail store is more than a Missouri fishing and hunting outfitter - we're a tribute to the Missouri hunting & outdoor experience. Whether you're looking for hunting & fishing gear or simply want to maximize your outdoor fun by visiting the Wonders of Wildlife Zooquarium next door, visit Bass Pro today."

Zooquarium? Pistol range? Barber shop? I'd check it out just once! Their Las Vegas store has a 40,000 gallon aquarium and indoor trout stream and antique gun shop (http://www.basspro.com/servlet/catalog.CFPage?appID=94&storeID=9#gallery)

The confusion about who actually owns the Railyards is very confusing. Union Pacific owns it, mostly, and there are other old tracts still owned by the State Lands Commission and other ancient agreements. The land transfer is an extremely complicated legal process b/c of all the toxic clean-up issues, responsible parties for the clean-up, etc.

The BPS is just absurd. Exactly the kind of thing that should be addressed by s_r_d.

Despite the absurdity and Disneyland appearance, I still think the Railyards will probably be one of the major catalysts in shaping downtown's future for the next 20 years. Much of what is proposed will change, but I'm pretty confident that something will happen there within a year or two. The City, the developer, Union Pacific, and all the agencies involved in clean-up have come too far in the process to stop now.

A major benefit in all this hopefully will be a new/improved multi-modal Amtrak/light rail/bus station. I hope it gets done right. I don't have high hopes for the retail, if the BPS is any indicator it's a lost cause.

The housing component could be really cool, as long as they mix up the densities and don't do it all as "lofts."

Sorry, meant to say "The QUESTION about who currently owns the Railyards is very confusing." I'm just confused I guess.

i love the turn that this blog has taken. i wish that someone was blogging this local politics stuff back when i lived in sac!

do you know if the infill plan still contains that canal proposal with waterside restaurants and cafes? as much as i'd love to imagine local restaurants (hey, even paragarys) inhabiting that water front i can just see it now -- TGIF, Chevy's on the other river, etc. anyways, is that vision still being talked about in the city?

I think that if I haven't already moved, when the day comes that downtown and midtown have all been turned into a giant extension of that giant strip mall complex off of Truxell/80, that I'll have to find new digs.

Yeah. No BPS, although the idea of the PF working again is appealing, I'd rather have him toting the bean to the zoo and having fun daddying around town.

Too bad they don't put a REAL aquarium and some greenspace at the railyards. I wouldn't mind seeing some local river fish and small wildlife on a previous toxic dump space.

I also want a smallish tourable submarine floating nearby like the OMSI.

Well, there did used to be a lake there ! Maybe they could bring it back.

The train tracks and station need to stay right where they are. If not, we could end up trading our beautiful old station for an Amshack trailer while we wait for the "new" one (note: there is no money) ! Same thing happened in St. Louis. Is there a Missouri them here or what ? Sacramento...the new St. Louis.

here's another vote for the submarine!

The canal feature is still in the proposed plans. It's a scenic way to take care of the drainage issues. The railyards were built in a seasonably-flooded area that was drained way back in the mid-19th century.