There's a Sacramento mayoral debate that KJ has deigned to appear in tomorrow, starting at 6pm. On Channel 10.

So, as you probably know, favas are in season. I don't think I've ever had them before that I can recall (I can hear you gasping), so I wasn't sure what the hell to do with them. BR gave me some tips, and I read about them in my Marcella Hazan book before I went to go buy. They are pretty darn expensive at the co-op, and also somewhat moldy! Oh well. I tried to pick out the smaller ones in the pile so the beans would be tender.

On BR's rec, I paired them with Frascati wine and Pecorino Romano cheese. This particular bottle of frascati is from Corti Bros. It was delicious and it only costs ten bucks. Wikipedia just told me that frascati is made from a blend of trebbiano, greco and malvasia grapes. 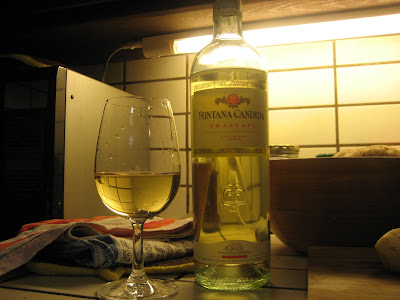 Here's the salad I made. I went all Marcella on its ass and made it with sunchokes, fennel, and parmesan. With a red wine vinaigrette. The small, new fennel bulbs available right now are tender and anise-y. I fucked with the settings on my camera and have made my photography worse if that's even possible. 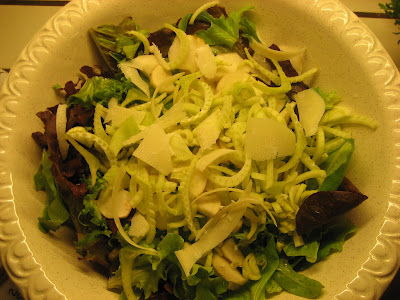 Here are the favas resting next to their natural ally, Pecorino Romano cheese. I am now addicted to this cheese. It's so salty!! 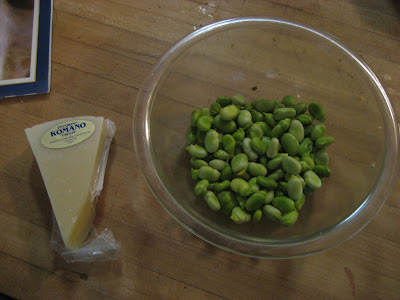 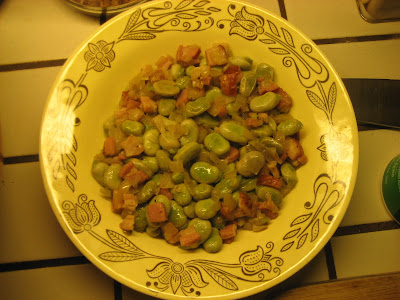 It does look really good. I will have to try pancetta -- we usually just have them with pesto.

The ones at the farmer's market are super cheap and not moldy. There are at least four different vendors selling them cheap right now.

This looks like heaven on a plate. I'm so glad to hear that they're at the farmers market. I only wish I could have found seeds at the store, to plant myself.

It almost looks like they aren't peeled. Did you peel them? Sorry if you did and I'm just being stupid; maybe it's just the lighting in the pic.

Nope, didn't peel them. They were tender. And I didn't get the "explosive farts" that I was warned about on a local blog. Or maybe my farts are just always so explosive that I didn't notice the difference.

Oh, I never realized you didn't have to peel the little ones. In kitchens we always had to peel them all regardless, but I guess that's 'cause we wanted uniformity. that's good to know though, cause though I love them I rarely buy them 'cause I'm too lazy.

make a hummus but leave out the garbanzos and replace with favas. mmm.