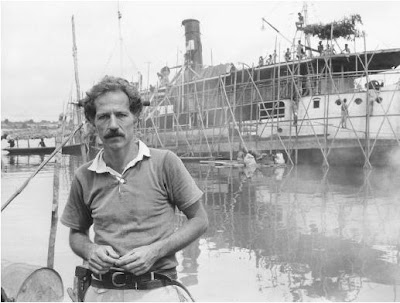 I went to see Rescue Dawn last night, which is Werner Herzog's remake of his own 1997 doc, "little dieter needs to fly". I had seen the documentary so I was unsure of what new this film could offer me, but it's a wonderful film. There are a few weak points, including the ending, but as usual, the jungle scenes are breathtaking, and the acting is spot-on. Steve Zahn's eyes are haunting me and making me sad right now thinking about them. Christian Bale captures the spirit of the real man that he's portraying. Herzog is the best! If you are interested, here's a supremely entertaining New Yorker article about the making of the film.

I've gone farmer's market crazy! Who's with me? Last night, I had Bledsoe's porkchops...again! I made a "relish" for them that I got from gourmet. It was crazy but great. Stay with me:

Juice a lime
Chop a peach
quarter some cherry tomatoes
Chop some basil
Chop some mint
Chop a scallion
Dice a jalapeno
Throw it all together and put it on top of your porkchop!
In retrospect, the strongest flavors to emerge from that combo were mint, peach, and lime, so I think you'd do OK with those three things.
I have also gone golden tomato crazy and I'm putting them in everything. And making pesto.
Posted by beckler at 8:51 AM

One of the ladies at the Farmer's Market had nice mellons!

I had forgotten how great that NYer article is. Herzog worked with a big crew for the first time on Rescue Dawn, and they thought he was so incompetent that they kept refilming sequences from different angles without his knowledge. For instance, he refused to have aerial shots so they would take a plane up and make the shots without him knowing. He, of course, refused to use any of them.

another choice bit (I think I printed this at the time it came out, too)

He tore into his latest tale: “A BBC television crew came to see me in Laurel Canyon. They wanted to interview me for the British première of ‘Grizzly Man.’ I didn’t want them to film right outside my house, so we went up to Skyline Drive. In the middle of the interview, I was shot with a rifle by someone standing on his balcony. I seem to attract the clinically insane.” A rifle? “Well, it must have been an air rifle or something. I was very slightly injured; it was a very small-calibre thing, I suppose. Also, I had a catalogue in my jacket pocket, which protected me. The bullet hit my abdomen, right next to the belt, but it did not penetrate into my intestines. I thought the camera had cracked and burned me. I flinched for less than a second and continued my thoughts, and the BBC people started to duck and run away. I was bleeding into my underwear! Quite often, I have the feeling that when I tell about some strange incident, people don’t believe me. But here it is, documented on camera. Proof!”

Two days later, an article appeared in the Los Angeles Times. The actor Joaquin Phoenix had flipped his car on a drive down the serpentine roads of Laurel Canyon. “I remember this knocking on the passenger window,” Phoenix told the Times. “There was this German voice saying, ‘Just relax.’ . . . I said to myself, ‘That’s Werner Herzog!’ ” Phoenix, who was unharmed, went on, “I got out of the car and I said, ‘Thank you.’ And he was gone.”

I'm fairly new to Herzog, so take it with a grain of salt... but I thought Grizzly Man was the worst film I had ever seen. It is the only film I've ever walked out of.

Then I rented Wild Blue Yonder. And although I watched the whole thing, that film now stands as the worst film I have ever seen.

presumably, anon, you didn't think that about grizzly man because of the directing, timothy treadwell just got on your nerves, right? or did you think someone else could have made a better documentary with that footage? if you timothy treadwell grates on you, or you think he's an idiot, then you're not going to like a documentary about him. he was a mystifying person, borderline crazy for sure. i thought it was very entertaining. you should have stuck around for the foxes!

i haven't seen wild blue yonder although biz said it was pretty bad. herzog has directed 55 movies in 40 years (i think it might be up to 57 because he said on fresh air last week that he has two other movies besides rescue dawn that he's editing). a few have been great, some have been total crap, lots and lots have scenes here and there that make it worthwhile to watch the whole movie. i admit that with his films it really helps a lot to know the backstory, but i don't think that that weakens them at all. he is so interesting and unique and has such a vision that he has to be a part of all of his movies, even the fictional ones in which he does not appear. for instance, "the enigma of kaspar hauser" (which w.h. wanted to call "every man for himself and god against all") starred an amateur actor who had been scarred by an early life of horrific abuse and who w.h. developed a touching relationship with. knowing that adds depth to the film, as it should.

it sounds like wild blue yonder has a long sequence filmed underwater that some people felt was remarkable. I remember Ebert (a huge Herzog fan) mentioning that he particularly remembered a scene in "Invincible" (which I haven't seen but which I think most people think is terrible) where crabs were furiously scrambling on a beach. Maybe you don't feel like it's worth it to sit through a two hour movie for a lyrical shot of crabs scrambling on a beach, but sometimes I do.

p.s.-aguirre wrath of god is just awesome, no qualifications necessary

hmm-I just looked up prig, and that's not right. Maybe more like a knob.

and while I'm rambling on an on about herzog, I'd like to point out that because of his deep, slow voice and his heavy German accent, and because of the serious subjects he tackles, people don't really give him credit for having a healthy sense of humor. he's always mocking himself and inflating his stories for comic effect. despite the grim subject of rescue dawn there's some humor in it, mostly because the real dieter dengler was so irrepressible

Isn't Herzog's incompetence part of the appeal? He's a brilliant filmmaker with a willful streak of ineptitude. "Wild Blue Yonder" is just ghastly, but you almost have to be a genius to make a movie so determined in its lousiness. Here's what I wrote about in the SNR last year:

"David Thomson once wrote that “no one else alive is as capable of a dud, or a masterpiece” as the great Robert Altman. Now that Altman has passed away at the age of 81, may I nominate German expatriate filmmaker Werner Herzog as the new titleholder? The impenetrable “science-fiction fantasy” The Wild Blue Yonder is a genuine, Ed Wood-style howler from the director of Grizzly Man and Aguirre: Wrath of God. Herzog pulls together recent footage from the Galileo space probe, archival NASA films and underwater photography from Antarctica, then attempts to piece it together into a sci-fi narrative by having Brad Dourif--a poor stand-in for Bela Lugosi--speak straight-to-camera as the member of a visiting alien race that “sucks.” All that’s missing is the shot of the stampeding buffalo.

holy shit, now antonioni is dead, too! now i'm going to HAVE to watch l'eclisse which has been sitting forornly by the DVD player for a couple of weeks.

That New Yorker article is great. I've only seen a few of Werner's flicks but I'll start Netflixing them. I'm almost done with all the Takashi Miike movies that Netflix offers.

Which are the good ones? And yes, I know everyone has different tastes.

I liked Stroszek a lot.

"Kaspar Hauser" is absolutely amazing and "Nosferatu" and "Even Dwarves Start Out Small" also are worth watching.

And speaking about Antonioni, "Zabriskie Point" has always been my favorite.

1. Dave- I think you'd like Cobra Verde or Aguirre best. Kinski at his most bad-assed.
2. The more time that passes from having watched Wild Blue Yonder the more my fondly I remember it. Sure, it is incredibly frustrating to sit through and I'd never want to watch it again, but it really captures Herzog's goal of bringing fresh images to the screen. The underwater footage is amazing.

"Fitzcarraldo" is easily my favorite of the dozen or so that I've seen.

man, zabriskie point is STILL not out on DVD. Netflix won't even let me save it as a future option.

after you've watched a couple of the movies that star kinski, then rent "my best fiend", too. and if you have time you should listen to herzog's commentary after you watch the movies.

I've had "Little Dieter" sitting on the table for a week or so...thanks for the well-timed Herzog reminder.

I'm in the middle of the New Yorker article--wow!

they posted this on gawker earlier, it's just what I was thinking:

Italian director Michelangelo Antonioni (Blow-Up, L'Avventura, etc.) passed away yesterday at the age of 94. Someone check in with Werner Herzog, see if he's okay

I saw Rescue Dawn yesterday too and thought it was well done. I was totally pissed when the guys took the boots but didnt' do any of the fighting! But yeah the jungle/mountains photography totally made me want to visit SEAsia again.

Question: Did Zahn get his head hacked off in his last scene?

And then Michelangelo Antonioni goes and dies on us.

well, Jed that's kind of a spoiler, isn't it? That's a true part of the Dieter Dengler story. They ran into some farmers and let's just say there was a hoe down? A scythe down?

I just remembered to be worried about Woody Allen's health. He's older than Herzog. I guess his love of S. Jo is keeping him young.

I thought the same thing about Woody when I heard about Ingmar and I was trying to figure out how old he is, I think 72?