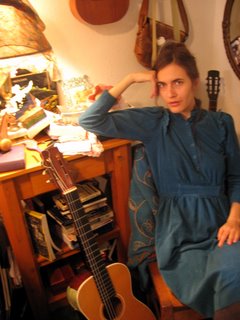 There was a lot of action on the blog over the weekend, which I like.

First off, I am listening to an excellent radio show that John P. djs on east village radio. Thanks to SSOS for the link.

Here's the lovely Josephine Foster, who played last night at Delta of Venus. It was an incredible show. Her voice is an unearthly instrument and she is in full command of it. I've heard that she was training to be an opera singer before she decided to pursue writing her own music. I'm kind of pressed for time so it's hard for me to describe it well, it's really not like anything I've ever heard. I'm seeing her again this weekend in Big Sur so maybe after that I can do a better job. Mi and L'au opened. Most of their songs were so quiet that everyone was sitting there trying not to move or breathe too loud and praying that our stomachs wouldn't gurgle and ruin the mood. Connie tried to turn off her phone in the middle and instead it started to ring, but it was a chirping bird ringer so it almost fit in. Mi and L'au weren't overly impressive, her voice was really clear and pretty, though, and maybe their record is good. They both look like freaky models and they wrote most of the music for their album in an isolated cabin in Finland. Despite that, the music isn't very interesting. After the show, one of the KDVS guys said that we were the best audience they've ever had at Delta of Venus, I guess because we weren't talking through the show, and I felt proud.

Born Heller was amazing. I really especially loved the songs that she played on that little harp. One of them made my eyes a bit misty. Her voice is unbelieveable.

i want to listen to some josephine foster but i'm too lazy to find a freebie of her stuff online. her website doesn't have any and the label's site wants you to buy the download. does anyone know where i could listen to some of her music? thanks!

Be frugal with those photo uploads to blogger. There is an alloted amount of space and it does run out eventually.
Knowing google though, they'll be giving us more space soon. They're quite generous in that regard. KLJ

Well, there's much music of Josephine Foster's for the downloading with eMule, if you're into fire-sharing.

I love Johns show!
Thanks.
I needed the pep.
-natalie.

Yeah, his shows great, and I love the picture of him with the baby. I tried to upload it but I mysteriously couldn't.

I meant "his show's great"

"alice said...
does anyone know where i could listen to some of her music? thanks!"

some self promotion here - I coalated all of the Josephine Foster song clips that I could find and put them on my blog a few days ago
http://www.soullesseyes.blogspot.com/