I may have mentioned that the English Singles have TWO (American) single coming out.  The first is on Slumberland.  Here's the info.  Look at that cover art! Here's a good review of it.  You better be able to get it at Phono Select.  The other one will be out soon on Squirmy Records, a Stockton-based label.  He also put out the Bright Ideas LP, which you can get at Phono Select for sure.  Speaking of records, the new King Tuff is out!  I'm gonna interview him.

Copenhagen/Gothenberg pics after the jump

Did you guys see this?  The last sentence is key.  OK, dude, first you open a champagne bar during the worst economic times in this country since the depression (seriously, they opened in summer 2008, which is not your fault, but has to be taken into account).  Remember when they were supposed to have 20 champagnes by the glass? I don't think that was the case at any point.  Then, you put the word "lounge" in your name, which is a pre-recession word that deserves to get erased from the lexicon, along with "luxury" and "loft" - those days are not coming back.  Then you turn into a kind of douche bar/nightclub where food pretty much seems like an afterthought due to your liquor license requiring you to sell a certain amount of food (I am assuming this), then you rebrand yourself as a molecular gastronomy restaurant, with high prices and inconsistent (according to BAR) food.  And then you blame your restaurant closing down on Sacramento's "lack of support for uniqueness?"  I understand your frustration, well actually I don't because I have never owned a business so I can only imagine, but your business always seemed rudderless and smacked of a corporate investment scheme and was so NOT SAC.

Good luck in San Francisco.  I hear the restaurant business is a breeze there! 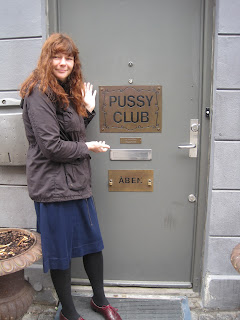 So we'll start with Copenhagen.  This was where we stayed.  Psyche but we were in the sex shop district.  This is me looking not haggard at all from jet lag and FORGETTING MY BANG STRAIGHTENER.  Do you  know how many times Scott had to hear me bitch about this?

More pics after the jump 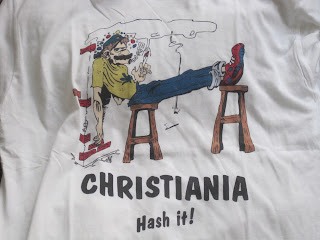 I'm back! Scott and I went to Denmark, Sweden, Norway, and London, in that order.  Stoked. Not jetlagged (yet). I will post on Tuesday cuz I gotta do, like, some work and stuff. Our vacation photos are a disappointment, in a way.  I felt pretty into just enjoying things and not taking photos of them, but maybe I should have made a bit more of an effort.  Scott got the best tshirt of all time.
Posted by beckler at 10:59 AM 6 comments:

After today, I won't be blogging again until June.  I have blogger's elbow and the doctor has ordered me to stop.  I told the doctor, "Hey doc, it hurts when I do this", and he said, "Well, then don't do that."

In regards to the heated conversation below, the Bee had a very thoughtful opinion piece on biking in our region in the Sunday edition. Bike riders obeying the rules was a sensible number 7 on the list.  That's about its correct order of importance.  If you build the bike lines and other safeguards, safe riding will follow. 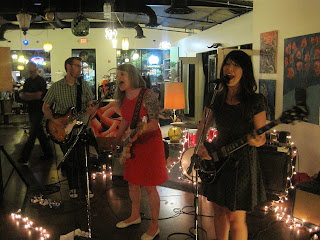 Pics from the Arts and Leisure/Knock Knock Show 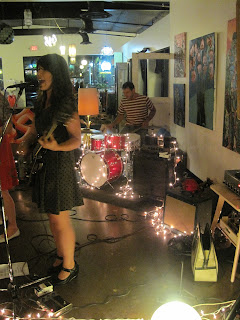 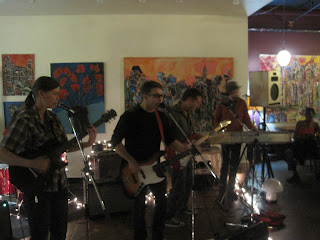 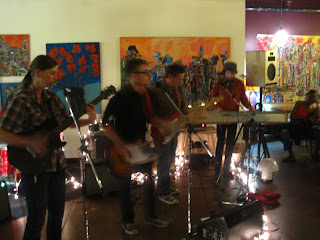 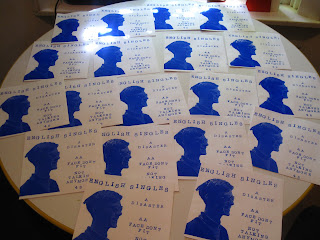 Yeah! This is finally happening!  Did you know that English Singles have TWO singles coming out, almost simultaneously?  One is on Slumberland, so put that in your pipe and smoke it. 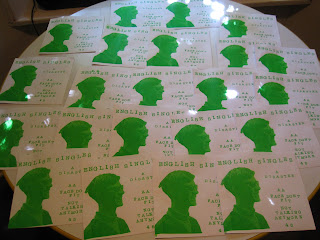 See ya in a month!

May is goddamn bike month

That's right, instead of celebrating the joy and benefits of bike riding, everyone just uses it as a platform for the tired saw of what bike riders should not do.  As if bikes are the problem.  Hey, I drive far more than I bike, and this is really a false divide.   Most people who bike do both.  Did you know that Amsterdam has far lower levels of bike deaths and injuries? Do you know why?  No, it's not because they wear helmets (they don't) and it's not because they follow every single rule all the time (they bike fast and pretty wild-style).  It is partially because of good city design but mostly it's because drivers there look out for bikes.  There are a lot of bikes and drivers are used to looking out for them so they don't hit them.  Period.

In this spirit here is my May is Bike Month list of driver chastising:

1) Stop speeding, especially on residential streets.  I have a traffic calming island right in front of my house and I see you roar and whip around it all the time.
2) Don't drive in the bike lane.  This includes turning the bike lane into a fake right turn lane where there is no turn lane.
3) Don't put shit in the bike lane, including but not limited to: branches, trash cans, leaves, broken tvs, dead bodies, etc.
4) Look out before you open your car door.  Always. You know where I am extra mindful to do this? Davis, because there are so many bikes.
5) Look carefully before you pull out, especially in herringbone parking.  Have you ever biked around this shit? It sucks.
6) Don't text or talk on your fucking phone.  Every time you pull a bonehead move this is usually going on.
7) Don't run red lights.  This also applies to 2 or 3 cars jumping the light at left turns.  That counts.
8) Stop being so full of rage all the time.
9) Don't yell shit at me.  This doesn't happen much, but sometimes.
10) Don't crowd me in my tiny bike lane.  I know things can be cramped, but sometimes you're just gonna have to follow me for a block or two to avoid hitting me.  Sorry.  Refer to rule #8.

I changed my Bee subscription to daily, and I am enjoying it quite a bit, especially because the online pop-up ads at sacbee.com are getting so intense.  And if I hadn't seen the print edition I likely would have missed this: Steve Mar and Amy Peterson's kid saved another kid's life! Is that picture the cutest or what?

Don't forget the Knock Knock show tomorrow night at Bows!
Posted by beckler at 9:19 AM 3 comments:

Gripe of the day

I just went to a talk by a scientist who is in the National Academy of Sciences (the highest honor for a scientist, and generally the culmination of a scientific career) and out of the two other people in my aisle, one of them fucked with his phone during the talk and the other started checking emails on her laptop and TYPING.  I told her that it was distracting and she stopped.  Tiny triumph.
Posted by beckler at 1:19 PM 2 comments:

Sacramento, what the fuck is wrong with you?
Posted by beckler at 9:28 AM 23 comments: 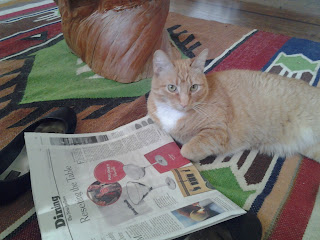 Enough of all this heated foie gras rhetoric.  We need a cat picture to cool things down.  Here you see Babs reading the NYT dining section that Biggert so generously dropped off.
Posted by beckler at 11:25 AM 7 comments:

My mind is pretty fungible (am I using that right?), so after I talked to Thiemann about the foie gras thing, I was a little more reassured that perhaps it is not excruciatingly cruel.  He has been to the Sonoma farm and said the geese seemed happy.  I think the really miserable part is maybe just the last 20 days or so.  He used the old slippery slope argument, but I don't think that's really a danger.

Lots of stuff going on at Bows this weekend.  I'll be the Friday and Saturday.  There's an art opening Friday, and then on Saturday it's Knock Knock, Allen Clapp Orchestra, and Arts and Leisure
Posted by beckler at 10:10 AM 10 comments:

There's been some activity locally around this foie gras ban that's about to go into effect.  Some local chefs are taking action.  From what I've seen of foie gras production, it's pretty hard to argue that it's not cruel and unusual punishment, and it seems weird to me that the same chefs who are scrupulous in sourcing ethically produced meat are rallying around this cause.  After all, they are against overcrowded pigs and chickens with their beaks clipped, right? This seems more cruel.  This could very well stem from the fact that I don't really like foie gras, especially when it's torched or warmed in any way.  I liken it to bullfighting, which I think should be banned.  I don't care if it's a cultural tradition.  So are public beheadings in some places.  I saw a bullfight in Spain and it was horrific.   I thought it would be festive and the outfits are so cool, etc., and instead it was people carving a hole in a live bull.
Posted by beckler at 9:37 AM 16 comments: