So yeah, Burger Boogaloo. What a rad fest. Even though there wasn't a band on the bill that I think of as a don't-miss, it's still the best fest around. I think I will try to go every year for at least one day. I guess we dodged a bullet by just going on the second day (even though the lineup wasn't as good). I hear people had to wait in line for hours on the first day. It was hot, too! 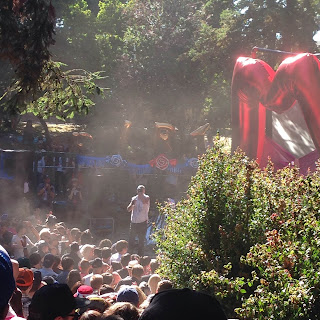 The last time I went was in 2014, when the Bananas played, but this year (and I guess last year), they moved to two stages, which made things run better. All the sets pretty much started and ended on time. This is the Dwarves. I had never heard them before and I only watched a few minutes. I found out that Stinky's Peepshow was going on in a tent at the same time, and MOM was in there pouring ranch dressing into people's mouths. I watched Lil Heather get a dry packet of gravy get poured in her mouth, too. 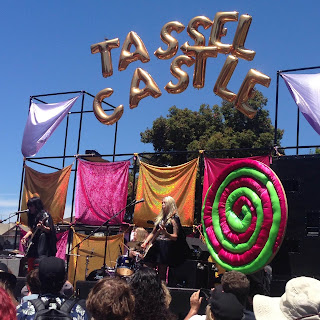 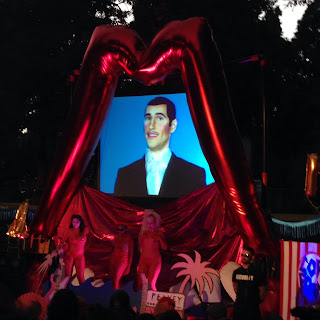 Seth Bogart was the headliner. It was rad. I got emo about it and wrote a thing for the SNR, because he mentioned Orlando. John Waters introduced him and called him a performer of dubious distinction, putting him in league with Divine! 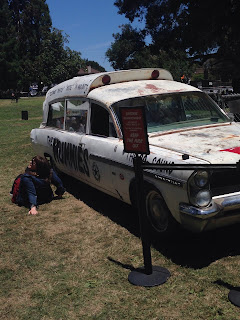 The original Mummies ambulance was there! I wish I could have seen them Saturday. I heard they drove it up to the stage and played on top of it. 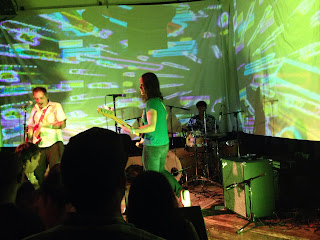 The Bananas played at the Starline in Oakland with Panty Raid after. I thought it would be a dive, but it actually had fancy food and biodynamic wine. I had a nice glass of Gamay downstairs. 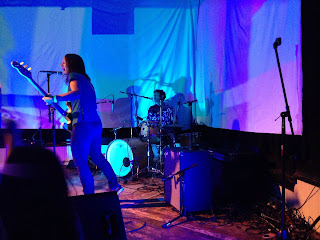 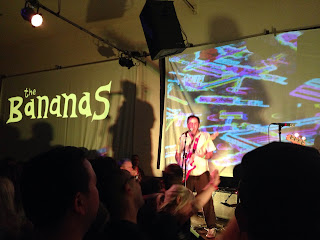 Finally, their name in lights! Panty Raid had only practiced once but they were really fun and Seth wore a jock strap (hot!) Burger is allrightallrightallright!
Posted by beckler at 12:43 PM 2 comments:

Burger Boogaloo was really fun! I will write more soon and post some pics but right now I am trying to get something together for the SNR, so I can get it in this week. One thing I just discovered from looking at the Burger website while I'm writing, is that the Bananas cassette box set is almost sold out! See this little clip here about it. Scott has a few, so better get yours before they are gone!
Posted by beckler at 11:50 AM No comments:

My mom's in town. She lives in Mexico on the coast but she a) hates the sun b) hates the beach/ocean c) told me this morning she never eats out because she can cook better things at home. Yep, sounds like the Mexican Riviera is the perfect place for her! She was saying the peso's down to almost 20 to a dollar. That is crazy! I have to go to Mexico at some point soon. It's so rad, I don't know why I don't go there more. JP was just in Mexico City and from FB his trip looks rad. It's been a few years now since I was there but I loved it.
I've been listening to the new YG Album a lot. It's a'ight. I didn't like Twist My Fingaz when it came out as a single a long-ass time ago, because it's too on-the-nose G Funk and not that creative, but in contrast to the rest of the album it's almost the best song. YG needs to get back with DJ Mustard! I was texting Nic about it and he pointed out that Mustard needs YG, too, which is true. He's getting into some like, adult contemporary territory lately and needs to get back to his roots. It's still good, but not a classic like My Krazy Life. The best part is that there's a track with Kamaiyah and Drake, but it's not Kamaiyah's best. It doesn't really showcase her talent. Still, it will bring her to the masses. Look how cute she is! I recommend her album, maybe the best of the year so far?
Posted by beckler at 9:07 AM No comments:

So I like Carla Meyer as the food reviewer for the Bee. She's got a bit less of an edge than BAR, but there's still some bite (heh) to her reviews, she's no pushover. She uses a certain turn of phrase like "the celery thrills" and "the harissa tantalizes" a bit too often, but that's not too bad. BUT she's been in over a year and there is a decided lack of interest in cheaper spots and "ethnic" spots, especially in the south area.  I am getting bored with reading about some spot in El Dorado Hills I'm never going to visit but nothing surprising, no little discovery out on Mack Road. She doesn't seem particularly interested. I don't think it's out of line to point out that BAR would sometimes glean some of his tips from this very blog and go on to review the place, like with Asian Café (which by the way has different owners now and I had a very sad meal there a few months ago).

For instance, tonight I'm going to go eat at Tanoor Halal before I go see Conjuring 2 (so excited!) There's a spot worthy of a review. I'm probably going to eat this meat pie thingy that they have that is bomb. And pretty much the only Mexican she has written about it Cielito Lindo, and like, a review of Dos Coyotes for it's 25th anniversary. Little Saigon is the culinary jewel of this area, and if she's not reviewing places there at least a couple of times a year she's not reflecting the food culture of Sacramento.
Posted by beckler at 8:47 AM 4 comments: