Go to Co Do and order the Mi Quang, people

Fucking Kings! That game was pathetic. The Trailblazers were terrible, and went so cold late in the game, but the Kings were worse. They couldn't capitalize on the five minutes where the Blazers didn't score.

I had a burger at Pangaea last night, and yes, their burger is really juicy and delicious, Burger Battle winner, etc., but I just like a small burger. Hope Rodney isn't readying this. Probably not! Like one of my favorite burgers is from that beach shack in Stinson Beach and I like it because it's small and it has mustard on it. I want a thin, charred patty, a whatever bun, some special sauce and shredded lettuce. I was just writing up my piece for Edible on Vietnamese soups and as I was eating that burger I was thinking about how much more vivid and satisfying most of those soups were than just a huge hunk of fatty meat. I want some herbs, and fish sauce, and heat, not just a slab of meat. Long story short: Vietnamese food is tops.
Posted by beckler at 9:20 AM No comments:

everything's on the table

I bought some tickets to a Kings v. Celtics game in Feb. I'm enjoying the little bit o' Kings winning streak. They are pretty much the worst (cheapest) tickets possible, 25 bucks each. I think you can pretty much see anywhere, though.

I won't go into the details, since this is a public forum, and I already told some of you about this in person, but I had a coworker make a questionable, Trump-related comment about MLK day, and after letting it fester for a couple of days, I asked him about it. Let's just say we agreed to disagree, but now it seems like he doesn't like me anymore! I was willing to let bygones be bygones because I said my piece and what else can you do, and he's snubbing me! It's a strange new world we live in, where we can't agree that MLK is a hero. I feel like nothing's a given anymore, everything is on the table. Very disturbing.

Also disturbing was this Martin Amis book I just finished, "The Zone of Influence", loaned by JD. The blackest of black humor and quite good. Based on the enormous amount of research Amis has done on the Holocaust. Told from three points of view: an Auschwitz commandant, a hunky Aryan nephew of Martin Boormann who is tasked with starting a rubber plant fueled by slave labor (which was a real aspect of the camp), and a Jew whose job it is to prepare the victims for the gas (among other terrible duties). Let's just say the buffoonery and familiar human failings of the Nazis are a little too close for comfort right now. I'd recommend it, but might be better to read it in like a year to spare yourself some anxiety.
Posted by beckler at 9:27 AM 2 comments:

Clip of Morrissey and George Michael on TV show 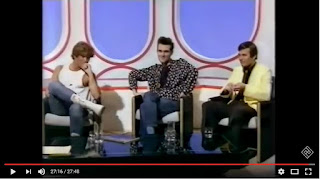 Morrissey is such a dick! It's funny to hear him talk about how revolting he found the movie "Breakin'". George Michael seems sweet. They just don't make TV shows like this anymore! RIP George Michael. It's rad how much he likes Joy Division, while Morrissey is just a snot about them. Morrissey: I found it really quite impossible to care.
I went to a Kings game the other nights, the one where they beat the Trailblazers, and it was really fun. I thought there would be actual craft beer. I didn't spot any. I had a Sierra Nevada for 13 bucks and then a tall can of Modelo for 13 bucks, which was too gross for me to finish. The food seems to be pretty standard arena food, with the imprint of local businesses, but not a strong association. When I was there, I realized that, due to volume needed, the food has to all be ready to grab and go. That's a pretty prohibitive restriction as far as craft or care of assembly. Does anyone have any food or drink tips? I hope to go see another game soon.
Posted by beckler at 10:56 AM 6 comments:

I am on call at work so I have to absolutely stay until 5. I think pretty much everyone else has left, since we are about to go into a four day holiday.  Somehow I also ended up on call on Tuesday, too?

I'm working on a really short piece on Vietnamese soups for Edible magazine. It has new owners, so I'm checking it out again. The old owners had problems, one problem being inexperience with owning a magazine. These new owners own Edible Reno. Anyway, I just keep going back to Co Do. It's my favorite Vietnamese restaurant right now. So far I've had their bun bo hue, bun mam vit, mi quang noodles (kind of a soup, more like a noodle dish) and their bun rieu. Two standouts are the mi quang and the bun mam vit. I'm going back tomorrow and then I'll write some blurbs. I thought the bun mam vit (duck noodle soup) would be boring but it had this smokiness that floored me. The duck was dry, however.

Nine more minutes till I'm off call and I can blow this dive for four days. Yay!

Top albums:
YG
KamaiyahGucci Mane (everybody looking)Solange (I slept on it and now I love it!)
DVSN (Mike C told me about this one and it's a real between the sheets classic)
Vince Staples EP is good
Schoolboy Q
Drake Views from the 6 grew on me, he usually starts his albums out with a couple of weak songs and this is no exception
Life of Pablo was a'ight, couple good songs
Wknd was weak AF!
Albums I will probably get into but haven't fully checked out yet:
Danny Brown (maybe - seems to rock-y for me. I like my rap and rock separate and actually I don't really like rock too much)
Beyoncé (hey, put it on Spotify!)
Miranda Lambert (on a friend's recommendation, it's a double disk and I didn't make it all the way through)
Tribe Record
Chance record (his baby talking annoys me, but he is obviously rad)
Frank Ocean (so meander-y, but I need to listen a couple more times)
What about you?!?!?!?!?!?!?
Posted by beckler at 11:37 AM 5 comments:

Twice yearly posting whether I need to or not

So, it's been a good six months since I posted. Maybe it's time! Partially this is because my browser is having some fight with facebook and I was stymied in posting that E-40 had just posted a (fabulous) picture of himself on Instagram that he captioned "E-Feezable Belafonte Balogiono Bellwether". That's it, simple. I wanted to share that, but I might as well make a post. 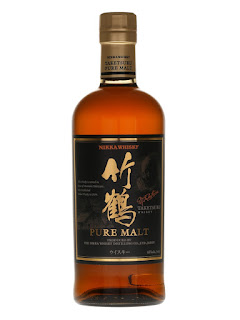 Yesterday I checked out the new Kru. Man, it is fancy inside! I was actually relieved to see that the menu seems exactly the same (maybe smaller?) because I thought it might be too cool and expensive for me now. Like when you have a friend in a band and they kind of blow up and get press but then you hang with them and you're like, "Oh, it's just so-and-so, they're still chill". I started off with a drink of Nikka Taketsuru because the description on the drink menu contained the words "sherry" and "smoke". It was very smoky and Scotch-like. I ordered it with one ice cube. I had actually started the night with a Pulp from Fieldwork, which was good enough that I got a crowler of it. So at this point I'm sipping pure liquor and reminding myself to drink slowly! That's hard for me, I am a chugger.
We had a reservation at 8, and one thing I hate is when you make a reservation for a restaurant and then when you go it was clear you didn't need one and there are a bunch of empty tables. For some reason that always makes me feel like a rube, but in this case, not only was it packed at 8 on a Thursday, but we had to wait at least 15 minutes (maybe more?) for a table. Anyway, crowded, beautiful yadda yadda. I really like the huge black and white seafood x-ray photos  near the bar.
The table got the mushroom salad, which is a Kru classic. I think it's bigger than it used to be but with less mushrooms and more lettuce. The only problem was with pacing. Two people got their entrees and two people got nada for a long time. It was awkward for those that had food. And then my appetizer came out way later than my nigiri mix, but I guess the waiter had made that decision based on the heaviness of the appetizer, and told someone else. Regardless, I didn't hear.
My nigiri mix was good as always, but the real standout was the smoked duck skewers. Wonderful. Will order again. I want to go for omakase there, I have never done it. I'm excited for new Kru but bummed it's not in my neighborhood anymore but glad they take reservations. How much does omakase cost? Is it like "if you have to ask you can't afford it" territory?
Top tens? Who is interested in some top tens for 2016. I'll tell you bottom ten was either a) ovarian tumor or b) Trump.
Movies: 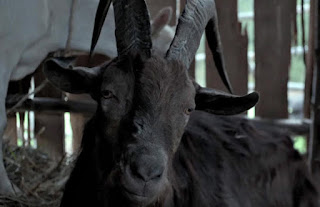 The Witch was probably my favorite. I nominate Black Phillip for best actor. Midnight Special was really good, with Jeff Nichols being a favorite young director and it's always awesome when he teams up with Michael Shannon. Not as good as Take Shelter, though. Walked out on Everybody Wants Some, was that maybe my only walkout? I can't believe Linklater made that crap. I wish I had walked out on that terrible beige Woody Allen movie, I had to look up the name just now. Café Society. Conjuring 2 was not as good as 1 but not bad. OK, I'll rank:
1)The Witch
2) Moonlight
3)Indignation
4) Manchester by the sea
I don't think I saw a single funny movie this year. I don't tend to go to comedies, and the ones I did were not really funny.
Maybe I will post about records next week. Or whatevs.
Posted by beckler at 2:45 PM 6 comments: