I need help! During early quar. I did an order of corn and "cal" (the chemical you make masa with) from Masienda. And I ordered a Victoria, hand crank grinder for like 70 bucks. There is not a lot of English-language guidance for grinding masa from whole corn, and Masienda is literally like "hey, buy our $2000 grinder". And I'm like, I'm not living your LA expensive hat lifestyle and no can do. These guys seem cool but c'mon that is way more than my first car cost (and yes I am hoping to get it for my birthday jk smiller doesn't even read heckasac any more) 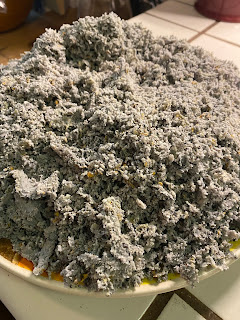 For almost a year now, once a month or so, I've been boiling the corn, soaking the corn, rinsing the corn and grinding the corn. It is fun and something I enjoy. The longest step is grinding, which take like 20 minutes, including assembly and breakdown of the machine (and washing when I am not leaving that to smiller). Above is grind one, I love the fluffy texture when it comes out of the grinder

The problem is the masa makes stiff tortillas that are not pliable. The flavor is good, but what good is a tortilla that won't wrap? Sometimes I solve this by making a sope kind of platform, but then unless you use a lot of oil they are kind of dry and even somewhat raw in the middle.

I've read online and a lot of people will tell you to grind it through the handcrank grinder twice. The already-ground masa is really tough to get through, you have to keep pushing it and adding water, which is kind of a mess, it over doubles the grinding time and - here's the kicker - I still had non-pliable, breaking tortillas which may have led to rage, gnashing of teeth and maybe even yelling? Smiller has sworn not to tell and neither will I. 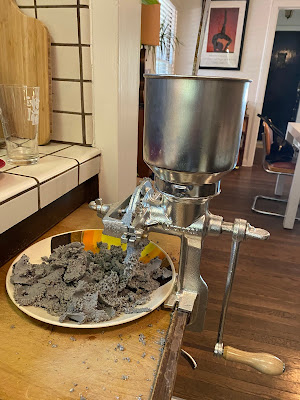 Here's the view of the second grind when morale was still high in the kitchen and their was a naive belief that this extra effort would work and be worth it.

I don't know what I'm doing wrong and I feel like there must be some kind of middle ground between $70 grinder which doesn't seem to work and $2000 investment so I can start Becky's Tortilleria, a business that I can guarantee absolutely no one is clamoring for.

There is a rumored one in the $200 range that can only be purchased in Mexico, and costs like 100 to ship here. I may try to get my mom to lug that here if she's ever able to visit the US again. But I can use advice!!!!

I had more satisfaction a week or so later when I made pozole from scratch, starting with dried hominy. 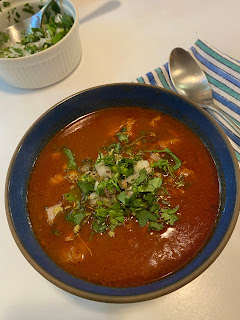 I made it with bone-in pork butt (heh heh), but without the ribs or feet, etc. to really get that richness to the broth, but the chile paste (a mixture of roasted, soaked and ground ancho and guajillo) made up for that. One funny thing is that I got this heirloom hominy from Anson Mills and it was...not what I want pozole hominy to be. It was coarse, yellow and oh-so-slightly sweet. It was more flavorful than what you usually get and I want hominy in pozole to be a more bland vehicle for soaking up other flavors. I would not buy it again, I would get the Rancho Gordo hominy, or just regular. 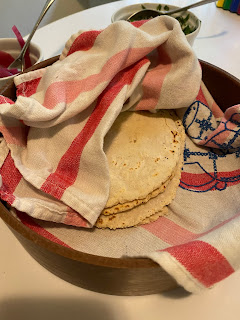 These are tortillas I mixed from Maseca flour, which the guys from Masienda will shit all over but it's still more flavorful than pre-made packaged tortillas (which are good and which I will not kick out of bed, basically all tortillas are good) 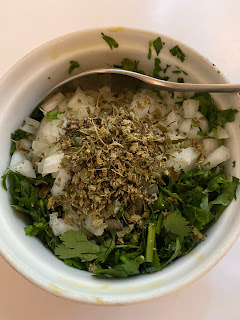 For the topping, I lacked cabbage and lime, but I made a mix of cilantro, dried oregano and onion. This meal made me miss Alonzo's and eating two baskets of chips and salsa before I get the pozole. If you like cilantro you are really missing out if you are not chopping the stems and including them in stuff.

Posted by beckler at 3:51 PM No comments:

I'm back at the movies and it's weird.

I love movies. LOVE. Mostly art-house, but also action and sci-fi. You know that if you've read Heckasac. Give me a long French movie where someone just strolls around and talks about life and I'm in heaven, especially if one of those people is La Binoche or Huppert.  It's been a real bummer not being able to see movies, and one reason is because I have a hard time staying off my phone when I'm watching movies at home.

I'm fully vaxxed now so one of the first things I did was go back to Tower. I so far have refrained from eating popcorn so I can keep my mask on, even though eating movie popcorn as a meal is one of my other favorite things besides watching Isabelle Huppert sit on a beach in the south of France and whinge about something. I saw Minari.

Then, on Tuesday of this week I went to DOCO with Smiller and saw Nobody. That felt significantly less safet because a) the rest of the audience was all young people (less likely to be vaxxed, more likely to carry COVID19 and not GAF) and b) there were more people in the theater than at Minari. The closest folks were probably 8 feet away, and munching popcorn the entire time (no mask).

I did not feel super COVID safe at Nobody, and indeed, have a back-of-the-mind fear that I might have the rona right now (Based on nothing, and got my weekly negative test at work from yesterday). But I'm also like: is this how life will be forever now? I mean, I'm vaccinated so I'm very unlikely to get a severe case.

I don't know, I don't have any answers. But I like being back at movies, even though it's not as comfortable and relaxing as it used to be. Nobody is pretty good, I really love Odenkirk. It's kind of silly. I thought it was charming that the youngs in the theater were into it. RZA is wasted in it, he could have been given a way bigger/better role.