So now I love rice and my maftoul journey

Growing up, rice was rarely served at my house. Maybe once or twice a month, long grain white rice as a side to meat (often a hamburger-based dish). No sauce or seasoning, except maybe butter/salt/pepper. I was not a big fan. I preferred any type of potato or bread as a carby side dish.
My eating has done a complete 180 since I was a kid. What I ate was shaped by a) we didn't have a ton of money and we were a family of 5 and b) my dad mostly cooked and the dishes were midwest by way of the military. He was not in the military but his dad and bro were and they liked military-style food. I know I have posted about shit on a shingle before.
Over time I ate a lot of rice out in restaurants, but at home as an adult I would make it fairly rarely, often brown rice with the thought that it was "healthy". I liked rice but did not love it.
Pandemic time, and my cooking went from 2 nights a week to 6 or 7, every week, for the last year. We def. averaged less than once a week for takeout. I feel guilty about this due to wanting to support restaurants but hey, I had nothing else to do and also for quite a few months the takeout containers and pickup process freaked me out as well.
I also started to crave rice. One of my first really good pandemic meals  I made was chicken katsu and I had some Nishiki short grained that was so perfect. And the rice and salmon as well I love.
Then jasmine rice, I have been making lots of riffs on Indian dishes with lentils and chickpeas and tons of aromatics and spices. Can't get enough of jasmine rice.
That's my rice story. Kind of lame, but it is mine.
Now, short journey to making maftoul, which was billed in the LA times as "the Palestinian cousin to couscous". I am lucky enough to have been gifted 2 different Palestinian cookbooks and I had some teeny tiny couscous and was looking for a recipe, and saw a recipe for a chicken maftoul dish. I knew I had to get some! I ended up randomly locating it on the Patagonia provisions website, and buying lots of overpriced energy bars and some tinned fish in order to get free shipping. 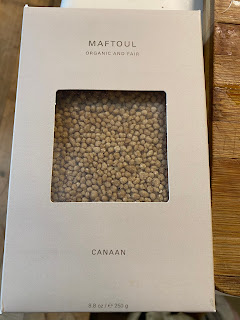 It's organic and fair trade, so seemed cool. Then I started to make the dish, but since I am for some reason pathogically unable to read recipes all of the way through it called for twice as many yellow onions as I had, but I threw in 2  plus some whole shallots (as a sub for pearl onions, which i could not get) 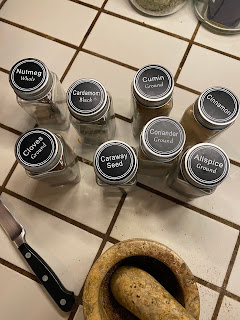 You know if a recipe calls for this many spices it is probably going to be good! I love nutmeg in anything, and I have a vague guilt that my cinnamon is probably not real cinnamon but I don't know how to fix that easily. 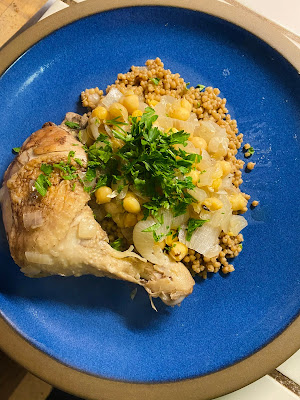 Here's the finished result with my typical and neverendingly bad food photography. The maftoul was boiled with olive oil and half the spices. The rest of the spices were with the chicken, which was seared and then boiled with the chickpeas and lots of onions. I sauteed the chicken and onion in ghee, which is like the best aroma in the world, especially when you throw all those spices in. The maftoul itself was completely unique in flavor, I love it! It's naturally sweet (no added sugar), chewy and earthy.
They are whole wheat flour rolled around bulgur! You simply must check it out.
Posted by beckler at 12:57 PM No comments:

Newsflash: Heckasac is not a Substack now. I mean, if it was you wouldn't be reading it here, right? Also, where did the word "newsflash" originate? No one is ever like, "did you see the newsflash? Crazy!" Ah, Merriam Webster said it is often used ironically when something is NOT surprising. Which I guess is how I was using it.

I've been thinking about meals because

a) I spend 34% of my time thinking about food (a percentage that has been a bit lower lately, maybe because I'm FINALLY a bit sick of cooking

b) I read the Deborah Madison memoir "An onion in my pocket" and the last chapter details memorable meals. 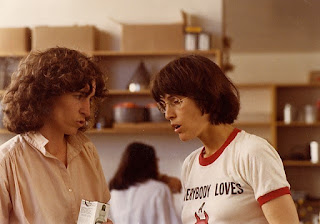 If you don't know who she is (that's her on the right): she's a cookbook author and she started the SF vegetarian restaurant Greens. Which was maybe the first fancy vegetarian restaurant in the country. I have a post-pandemic goal to eat there. I've never eaten there but when I looked inside a couple years ago I discovered it is gorgeous!

She is from Davis (her dad was a UCD botanist) and she was a member of the SF Zen center and a good cook so they kind of ordered her to open the restaurant. I didn't know that after opening it she only ran it for 6 months and has been mostly a cookbook author since. I have two of her cookbooks and they are pretty good. I feel like I should use them more.

Her memoir is great and she is a bit grumpy but in a way I agree with, like wanting food to be simple and not fussy.

But: memorable meals! I will share one. Please share your own. I posted about it at the time, but I still remember it fairly clearly! 2009. Belgium. Hop growing area. We got a tour of the brewery and the guy who conducted it was also escorting a Japanese-speaking visitor with very little English (none of us knew Japanese) and he convinced us to go to a fancy restaurant. I was nervous because I think it had a Michelin star and I didn't know if we could afford it.

Our Saint Bernadus brewery worker companion gave a vibe that we were a bit uncouth from only knowing one language and being worried about the cost, so I remember a feeling of shame mixed with excitement.

The whole agriculture area smelled like manure very strongly, and the big deal was the the hop shoots were coming up at the time (spring). They are a delicacy in the area, and only available for a few weeks. We got (I think we split it due to the price) a pork steak with hop shoots on top. The picture is in this post.

The craziest thing was that somehow the steak had picked up the earthy, raw character of the manure-y smell of the fields (like a steak terroir) in a way that was not gross but uncanny.

Nice to discover the restaurant is still around! Share a memorable meal.