I ate at Mulvaney's B&L last night. It might seem like I'm doing a lot of fine dining, but Tuesday at Magpie was for a birthday, and then this other dinner had been planned for a while. This dinner was funny because I forgot to make a reservation (I thought I had already done it) so we sat in the "dish room". Mulvaney's has a couple of little nook rooms back through the kitchen. I've been in the conference-room style one because that's where the Baconfest judging goes down. But he also has one in a wine storage room, and then one in the room where they store all their platters and cake stands and stuff. But it has nice lighting and they have candles and it's actually private and fun. On to the food after the jump

D'oh though I just found out that they last minute canceled their March dinner. Oh well, hopefully some folks will read and will go to the April one. 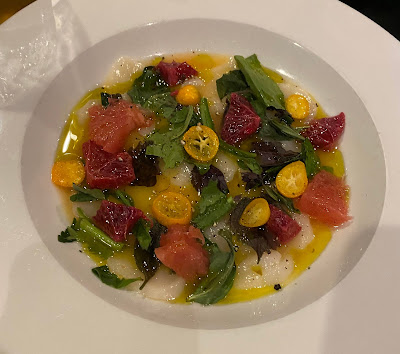 Went to Magpie last night. Had a wonderful meal. This was the scallop crudo with tomatoes, basil and citrus. Dude, the thinly-sliced scallops themselves were unbelievably sweet and delicious. 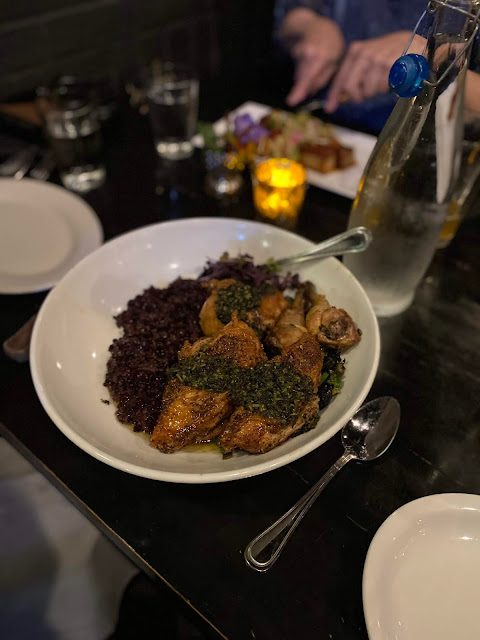 Then we got the chicken for two. Truly an iconic and affordable Sacramento dish. $40 and we had enough leftovers that I'm having it for lunch today. That black rice! And they had a good Altamont brew on draft.
Posted by beckler at 12:07 PM 3 comments:

Y'all know I won't go to Davis on a weekend, but for those brain fans, or parents of lil brian fans, the Center for Neuroscience (where I worked for yea verily a decade) is having a Neurofest on Saturday, March 14th. One of the talks is "From Dead heads to depression meds, how psychedelics are impacting modern medicine"'=

Speaking of Davis, as I always am, I need to go see the Stephen Kaltenbach exhibit at the Manetti Shrem. I liked the Doug Aitken video installation, mostly because it's trippy and I was in there by myself so it had an infinity room vibe for free, with no line! That's there until June, Kaltenbach just opened so will be there for a while.

I guess my Dante Club article is going to publish in the Bee today! It's in the paper on Sunday. I probably won't be able to read it until Sunday due to paywall.
Posted by beckler at 1:52 PM No comments:

Shouts and Murmurs or Real Life?

Dang, this article on this Bay Area hairdresser reads like a parody, like a New Yorker Shouts & Murmurs column. Why do people brag about taking baths? It's relaxing but kind of an inefficient way to clean yourself and also, I will drop some country kid cred here and let you know I did not have a shower growing up and that will really take the romanticism out of baths!

And checking out her haircuts, I see she is bringing the mullet back in a big way. I mean, it's been what, since like the early 2000s so it's due. I think many of the after shots have incredibly awkward shapes. I mean, imagine, all these shots are from styled hair, if you have this kind of wavy hair, like I do, on any given day it could probably make some very funky shapes.
Posted by beckler at 3:22 PM No comments: 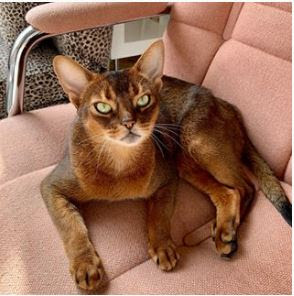 Molly Young is fascinating. I won't say I am obsessed because that is creepy. She is extremely funny,  her writing is brilliant, she is beautiful and she has an amazing cat and apartment. That's her cat (and cool chair) above, I will let you snoop the rests on her Gram. She writes a newsletter called "read like the wind" that I subscribe to and you should too if you like to read (fiction, mostly). She just wrote this piece for NYMag on corporate speak and I love it! Here's just one funny quote:

In August, WeWork — recently rebranded as the We Company — submitted its prospectus to the Securities and Exchange Commission. The document is just under 200,000 words long, or nearly the length of Moby-Dick, and it reads like something a person wrote in the middle of an Adderall overdose with a gun to his head.

I have heard a lot of these terms in my job, and used a fair number of them and the thing I think she leaves out in analyzing why people use them is that it passes for fun in the sad and un-fun atmosphere that is the modern office workplace. It makes you feel smart in and in-the-know and helps keep impostor syndrome at bay.

I also love Sarah Miller (she lives in Nevada City! and has an Instagram obsessed with her cattle dogs)

And Taffy Akner, who is pretty big time now and wrote an acclaimed novel but also will kind of always be known for her Gwyneth profile.

Is it just me, or has anyone else experienced getting a little more feminist woke than they used to be and now getting a bad feeling from some Murakami stories? Let me explain, after the jump, also there will be some pictures and discussion of eating at Jim's Good Food last night 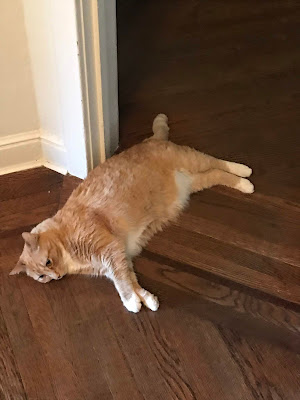 It struck me as funny that Babs chose to flop down in the doorway between the dining room and the hall. Totally in the way. Food stuff after the jump

Bottarga is a yes

Bout to go catch the train, which will be late and fill me with rage. But yesterday it took me like 70 minutes to get home in traffic so....omg commute complaining, so exciting!

Here's a great article from Eater about why we can't have nice things - specifically Euro style wine bars. No really, it's more interesting than that may sound to you. It's about why things that are cheap and unpretentious in Europe are often so expensive and fussy here.

Three day weekend but I'm on deadline for the failing Sacramento Bee (so sad about the bankruptcy and hedge fund thing) so I have a bit of deadline dread. Even with only writing a couple of times a year I stretch that dread out as if I wrote all the time!

The Bananas are playing the Knockout tomorrow so I'm going to that. We are going early so hopefully I can grab dinner somewhere good. I might be alone for that part so might be able to just grab a seat at the bar somewhere. Huh, La Ciccia is "rustic Sardinian" fare nearby? I'm super stuck on Italian food right now. I def want "spaghetti dusted with bottarga" tongue wagging emoji

Posted by beckler at 4:34 PM No comments:

defend blood oranges to me please 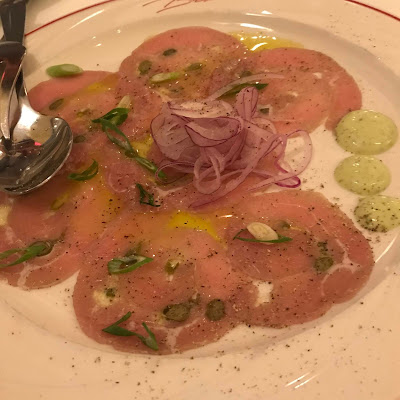 Smiller and I did our Valentine's dinner last night. I love a reservation, so the Valentine's crowds are not my problem - it's the fixed menu I don't like. Although, actually now that I look at the Biba Valentine's menu, it looks pretty freaking good, but would be way too much food. Usually I don't like a fixed menu because I don't want dessert, but last night I actually got dessert. Anyway, this is our first course - paper thin slices of raw veal with capers, drizzled with olive oil, thin raw red onion on top, and a few dollops of basil mayo. We got a bread basket too so it was great piled on bread. More after the jump
Read more »
Posted by beckler at 8:17 AM 2 comments:

I was in the 7 am class today. My fave teacher, and she has the all-rap playlist. I was stoked that she played Kamiyah (do yourself a favor and watch this), then E-40 Choices (I will never not laugh at "Star Wars? Nope. Yoda? Yep") and I felt as close to joyful as my Grinch-ish heart gets, especially that early in the morning, and then she totally bummed me by calling out that she was playing a Chris Brown song and didn't care if that was freaking anyone out. Now, number 1, I wouldn't even have noticed it was a Chris Brown song so did you have to make that a thing. And number 2, now I'm just fixating on picturing Rihanna's poor battered face. And thinking about how the class more than likely has at least one or more domestic violence survivors (it was pretty full, and it's always majority female) and maybe that just about ruined their day.

This reminds me of right when Finding Neverland came out, they instituted an ill-fated "motown ride" which is turns out Motown is not good for spin, but it meant mostly Jackson 5 songs, like multiple in a class.

Obviously art vs. artist is a debate that will never be "solved" but I just think it's different if I may listen to some R. Kelly from an old scratchy CD alone in my car (not saying I DO), but I would not subject anyone else to it!

Now to be even more salty, y'all are serious about this Bernie stuff, huh? This is making me so anxious. I was up at 3 am reading Bernie Twiter and worrying. Someone in NH canvassing said she was talking to a bartender and asked about Bernie and he said he voted for Obama, then Romney, then Trump and now is into Bernie. I can't wrap my head around this. I might vote for him in the primary, though. This is not anti-Bernie, this is a little dash of he is absolutely unelectable and another soupcon of how can this country be so insane to go from Trump to Sanders.

Yay Parasite, right? It's STILL playing at Tower and now it will probably be there another month so go see it if you haven't.

First, let's get some business out of the way. Can we all agree that a cliche that should be eliminated from restaurant reviews is that something "did not disappoint"? I will vow to try as well.

Second, how Sac is it that a lot of good restaurants are closing but meanwhile Easy on I was packed last night? Pretty damned Sac. Not to mention that the Taco Bell Cantina was seemingly the busiest "restaurant" on K street last night. Let's hope that's novelty alone.

Thirdly, a sandwich spot called "Lo/Fi" has now opened in the former spot of June's. A small part of me was still hoping June's would reopen. You'll have to check it out for me. If it has June's hours then I can't get there since I work in Davis. 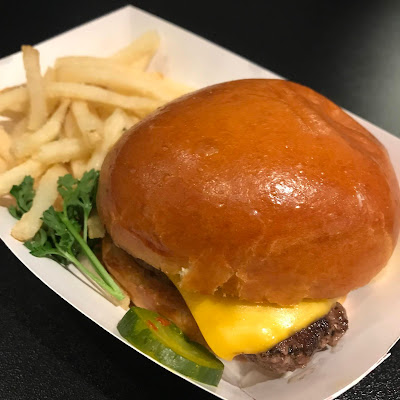 I was happily invited to the soft opening of Jim's Good Food last night. They served their butter burger and fries, and a couple other bites. It's where that Coconut Fish Grill place was, near University of Beer. Basic decor inside, the most  notable accent is a swirly wallpaper. There's a mix of booths and tables. Good beer selection on draft, I didn't check out the wine selection. More about Jim's after the jump

I just responded to a Doodle poll with 60 timeslots. This person is clearly insane.
Posted by beckler at 11:42 AM No comments: