Should I change blog title to heckamovies?

I watched Bergman Island. I wanted to see the internet's boyfriend this Scandinavian guy who is a working doctor and also in this move and Worst Person in the World (which is supposed to come to Tower but I'm not holding my breath). He is indeed handsome. Bergman Island reminds me of a movie I love, directed by Joanna Hogg, called Archipelago, which is about privileged people vacationing in an island-type setting but still not being that happy and riding bikes around. But Bergman Island throws in lots of Bergman discourse and a movie-within-a-movie (with some sexy sexy scenes with the Dr.) and has some fuzzy ideas about art and marriage. I enjoyed it, it could have been a bit shorter (as most movies could!). I really want to visit the Bergman Island, except it's overtouristed by Bergman nerds so probably a nearby Swedish Island would be better.

I was reading about it after I watched it, and it turns out that Greta Gerwig was cast in the wife role, but dropped out, and instead it was Vicky Krieps (so memorable from Phantom Thread). I think this movie would have been terrible with Gerwig in it. I like her a lot but she doesn't exactly disappear into a role. Then I was reading what she is up to and she is writing and directing the Barbie movie with Margot Robbie and Gosling as Barbie and Ken. This sounds like a terrible idea.

I also watched A Hero, directed by Asghar Farhadi, who directed A Separation, which I've never seen but I know a lot of people like. A Hero is grueling to watch, it has shades of Bicycle Thief (I think, but I haven't seen it in 20 years so I could be wrong about that). It factors in social media in a deft way that will age well since no specific platform is mentioned. The star Amir Jadidi is so good, he does amazing things with a melting smile and duplicitous eyes. It's interesting to see home and business scenes in contemporary Iran.

Glengarry Glen Ross and a bad back

I threw out my back. I know, "fascinating" you think, "tell me more". I think it is funny that I did whatever I did (sprain? strain?) when I was bending over to wipe my drool up off the floor of the UC Davis gym because I was filling a tube for my COVID spit test. I've gotten like 80 tests and I've never drooled. I must have been really hydrated!
Anyway, I almost audibly heard a "sproing" in god knows what muscle, above my butt and pretty quickly it became painful and scary to sit down or stand up. Walking was fine but changing positions was hard. I went to see Parallel Mothers at the Tower after work and the getting in and out of the car sitch was tough.
I liked Parallel Mothers, I don't think I love any Almodovar movie. I just do not vibe or relate. My fave was probably that recent one with Banderas subbing in as elderly Almodovar (with back troubles!)
I had to call in sick to work the next day. Luckily, I had a million muscle relaxers from old injuries because docs give those things out like candy. After the one day I could work but not much else. It's been 8 days and I am really hoping I can go for a short run tomorrow.
I still managed to go see The Lilies play at the Starlet room (is that what it's called?) and that was fun despite being masked. It is easy for me to resist drinking when there aren't good options.
Me and Smiller watched Glengarry Glen Ross last night because he had never seen it. I think it holds up! I still love it. It came out in 92 and I'm pretty sure I saw it in the theater. It hits different after you've worked in the office. The Ed Harris character reminded me of a guy on my team who never stops complaining! It's like dude there's the door you are free to go. Even though women's stories interest me more these days I can still appreciate this movie and revel in the masculinity, swim in the testosterone, luxuriate in the hairy posturing.
The topic of GGR came up because I watched House of Games the other night. So good! I love Mantegna, and I can never not picture him as the Simpsons character he voices (also love him in Criminal Minds!) I didn't know that Lindsay Crouse is Zosia Mamet's mom, I thought it was second actress wife. No shade on short hair at all but I think that is one of the least flattering cuts of all time. It is flowbee material. I love her all beige outfits however. I have a goal to do more monochrome dressing, but I don't know how to get the tights shades matched (also I barely go anywhere so not much opportunity to work on outfits or show them off)
Posted by beckler at 4:25 PM 1 comment:

Glad I can at least crack myself up with the banner photo. Every time!

How to stay sane in the current times??? Reading (Eve Babitz, Hilton Als, Gary Shteyngart currently on rotation with New Yorker of course). No Didion read or planned to read, and I'll leave it at that.... 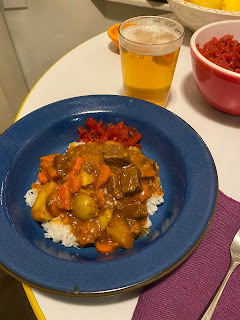 Cooking: Japanese beef curry. All ingredients from Oto's, which was bangin' around New Year's. I used the curry roux blocks rather than making my own from S&P curry powder. Those are the traditional pickles to serve with (fukujinzuke), which of course Oto's had. I've had curry at restaurants but don't recall having the pickles before. Served with a 12 degrees from Urb, so good! A surprise to me is that most curry recipes have a grated apple in there, but it lent a really good sweetness to it. I want to make it again with chicken katsu.

I also nixtamalized and ground the last of my corn I bought from LA boutique corn vendor Masienda in early pandemic. It was a relief to finally use it all because I won't be grinding my own corn anymore until I find a better corn grinder than the La Victoria hand crank one. It just doesn't yield pliable tortillas. But I have masa flour from Bob's Red Mill and a blue corn flour from Masienda right now so I'm good. I also made handmade flour tortillas the other day. Those are easy and really good. I made the mole amarillo from the recipe from La Guelagetza but now I'm realizing that their recipe is maybe weird (it is certainly hard to follow!), nevertheless it was quite good. Hard to argue with fresh ground spices (like oregano, allspice, cumin) and dried guajilllo chiles as a base for anything. Did not snap a pic of my handmade tostadas with mole amarillo as the roughly ground corn made them kind of  ugly. 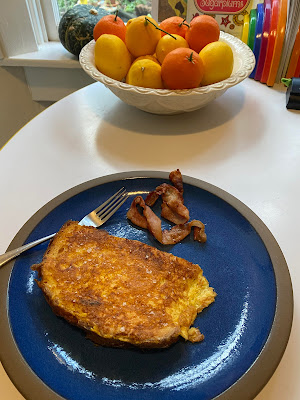 This was the best sweet thing I ate. The last couple of years Smiller's mom has been gifting me a panettone for Christmas and I've been making French toast out of it. It's insane

Posted by beckler at 2:28 PM No comments:

M.R. had warned me that LP didn't have much of a plot: "it's a vibe" in his words, so I was prepared. Let me start with the fact that the ticket at Tower was 17 BUCKS!! Is that because it's 70 mm? Also, no previews, so we missed the first five minutes. Is there an awesome credits/title sequence? IDK.

Once I accepted that I had missed the beginning of a movie which has only happened to me once in years and then only because I had the start time wrong, I settled in for the Haim-ish ride. Get it? Haimish? (that's a Yiddish joke). I greatly enjoyed it, although it really felt like a cross between a Wes Anderson and PTA film at times, what with the precocious kids and on-screen theatricals.

The only truly bad is the really stupid Japanese accent parts, which were very jarring and also had a dumb "payoff" punchline. PTA has said that his Japanese step-mother-in-law has had the experience of people speaking English to her in a "Japanese" accent, and well, maybe? I'm not sure I buy that but that part still should have been cut. I'm sure some far better scenes were left on the cutting room floor. In it's WTF-ness it did authentically feel like a scene from a 70s or 80s film but so what not worth it.

Alana Haim is as dynamic as everyone says and there are so many just beautifully shot scenes. Most of the cameos are really good (Sean Penn and the casting agent come to mind, could have done without the B. Cooper) and again, their randomness lends itself to the 70s shaggy filmmaking vibe. It's sweet and funny. The 10 year age gap does not bother me as it's not realistic that they would be together, so I choose to disregard any conclusion from the ending that they are going to be and think that the kiss was a fluke.

The music was mostly apt for the scenes. Bonus for making me be like "this is a great Doors song" and props for Smiller for instantly naming it as Peace Frog. Also love to hear Barabajabal in any context. Or to have an excuse to say it, or to get it caught in my head.

I fully applaud PTA making it so that he could hang out and pay tribute to where he grew up/lives and to cast friends. I saw the budget was a surprising 40 mill (I don't really follow the movie biz so maybe that is not surprising?) and as of a couple days ago it had made 6 mill despite really wide release so I think it's not going to be considered a hit.

In conclusion, for my college application essay: I do very much like Paul Thomas Anderson.

Posted by beckler at 1:02 PM No comments: