So guys, I'm not sure Hal Hartley movies stand up. I was reallllly into them in my teenage years/early twenties, but I watched Henry Fool the other night and thought it was terrible. Didn't even finish it. But of course that was a later one, and was never one of my favorites. I remember my house used to have a poster of it, but I doubt that I was the one who put it up. Some other Tower worker.  Has anybody watched Trust lately?  Or The Unbelievable Truth?
Tomorrow is the Lunar Flower Festival parade in South Sac, starting bright and early at 9am. Will I make it? Probably not. Then next weekend is the Tet festival. I don't know if these have always been separate, but it's kind of confusing. This press release explains the timing. I guess if I watched from Florin I wouldn't have to be there at the crack of nine, since it starts at Fruitridge and travels towards Florin.
I went to the Tet festival two years ago and it was fun. Definitely some good food, although since we can get great Vietnamese food all over South Sac at any time, it's not a must-attend like Hmong New Year. Also lacks the costume aspect. I've said it a million times, but IMHO it's events like this that make our city (fill in the blank: interesting, worthwhile, world class), not say, an arena and a terrible team led by a cry baby who nevertheless did manage to defeat the slumping Cavs the other day.
I'm judging Baconfest tomorrow. Last year I didn't get asked, after (I think) three years in a row judging. I love to judge (in general). I am kind of dreading it, though, as far as how I feel after. I might try to fast until then, but maybe that would be worse. It's like 30-some bites and dishes at minimum.
Posted by beckler at 2:52 PM 8 comments:

Trump is prez. Let the long national nightmare begin. Smiller and I were going to the coast but canceled due to the storm(s), so I'll be at the march tomorrow. My mom is going to a women's march in Mazatlán as well, pretty cool. You better believe they are just as bummed as we are down there!

I heard the new Migos hit yesterday, and as a long-time Migos fan (since right after Bando, although Bando has never been a favorite), I'm not quite sure why Bad and Boujee is taking off the way it is. It's pretty good, but they have so many other songs that are even catchier. Regardless, kudos to Migos, who I'm sure are faithful readers of Heckasac. I plan to watch Atlanta soon, I know they are in it in some capacity.

Tonight is some Leanord Cohen tribute show at Starlite that I've heard EC is singing in? I hope I can stay awake to make it.
Posted by beckler at 1:21 PM 2 comments:

I haven't checked the Halloween blog yet. The calling procedure stresses me out. I should look to see if I can get in on any bands, though. I can sort of sing and I once played a very simple keyboard part. Hire me!
Some things about the winter and my job starting really early blow, but a cool thing is how beautiful the light is on the way in over the Causeway when the sun is coming up. Today it looked like a painting, with lots of soft pastels, and an almost-full moon high in the sky still. Then I often catch the sunset when I'm in West Sac on the way home. It's nice to have a few minutes in that wide open space where I can see the whole sky, I wouldn't get that if I was already downtown.
Wow, Yianopolous and Shkreli (I refuse to look up the spelling because I don't want to read about them) at UCD this afternoon. That's a real gruesome twosome. What with these dudes and Trump's cabinet I feel like we are living in a Batman movie sometimes, with supervillains. Only no Batman to come save us.
Posted by beckler at 9:04 AM 16 comments:

This is a reminder that very funny local prank blog Cockeyed, is still at it after 17 or so years?!?! I know the guy who does it through a friend of a friend and got to participate in a prank a million years ago where he altered a sign at the downtown plaze to include a golden banana. I will dig up my picture of that. Today I was chuckling at his post of signs he added to gun show signs and it's always good for a laugh.
Oh man, and I just remembered that a year and a half ago I was walking through Old Sac and he flagged me down for his age project. So there are closeups of me, including my eye that has a little skin tag ha ha. No one is supposed to notice that. My hair looks good, though! My skin looks similar to the woman who smokes a pack a day. He concluded from his project that there was no difference. I think genetics and sun exposure are equally influential. I feel like I look pretty firmly in my age bracket, which I feel great about!
Posted by beckler at 1:44 PM 9 comments:

Work project that I don't want to do = looking for R. Kelly Reno tickets online. It's this Saturday! His tours get scheduled in the tweakiest way. I check often enough, so I should know. I'm bummed I missed his Christmas concerts with the giant puppethead R. Kellys on stage. His Christmas album was (shockingly) phoned in. Not any classics on there. I didn't listen to his last album, Buffet, much either. I guess his daughter was on it, under the stage name "Ariiraye". Try to say that name three times fast!

The Bee had a story about local bathhouses today, mostly about Asha, and they mentioned that Korean one in Rancho that's for men only. It's come up before when I've looked for a local Korean spa. I can't tell if it's legit or sexy, which doesn't really matter since I can't go anyway, but here was an interesting Yelp review:

I checked in on fb for the first time in about a week last night, and I can tell you that a nice side effect of the break (or maybe the main effect) is that I have a lower stress level from not constantly reading think pieces about Trump. They are impossible for me to resist, but ultimately pointless since we don't know what he is going to do and there's nothing that we can do (or little). That's not to say I am ignoring what he's up to - I read the Bee every morning and look at the NY Times and google news. I read a few of them last night and the stress was instantly back. Just sayin'
OK, can we talk about this? No. Nu-uh. No nukin' way. There is so much wrong here. We were excited because we received a chocolate peanut butter beer? That's like saying we were excited when the rash flared up on our inner thighs. This is like a restaurant critic reviewing a KFC Bowl O'Sadness. I like Carla Meyer's reviews.  A lot. My main beef is that she should be reviewing Vietnamese places AT LEAST 2-3 times a year, or do a big roundup or something. But my second beef would be that there seems to be a big hole in her knowledge surrounding beer (I recall a mention of Blue Moon and an orange slice). It's easy to pick up some basic knowledge. A certain colleague of her writes about beer almost exclusively.
Posted by beckler at 9:53 AM 5 comments:

Looks good, despite being a cartoon

The Crocker has some February programming and exhibits to commemorate the order to intern Japanese-Americans. In addition to some ongoing exhibits and other talks, Feb 19th will be an all day "Day of Remembrance" with speakers and a free screening of Day of the Fireflies. I'm hoping I can come to that. This is an important thing to remember, especially with the fuckery going on these days, but just in general. We can never forget that we locked up our friends and neighbors without cause, and then stole their property as well. I brought this up to some older relatives the other day and they started down the path of "well, the camps weren't that bad" and even "the kids liked it". NO!
SM will be happy to read that I pitched an article about it, and got it approved before I realized that it's the kind of project that stresses me, and that I pitch because I think *someone* should write about it, but that that someone in this case is not going to be me. I enjoy writing about food/drink much more, so I need to mostly stick to that.
I still get PR releases due to my old MidMo email account. I thought you might enjoy seeing the one I got today:
Wayne’s World 25th Anniversary
Panel Discussion & Red Carpet Event
WHAT: Join the director and cast members for a panel taping in honor of the 25th anniversary of Wayne’s World (WW25).
The videotaped interviews will accompany the feature film when it returns to U.S. theaters for a one-night-only celebration in February.
WHEN:  Monday January 9th, 2017
Press Check-in – 5:45pm
Red Carpet talent arrivals – 6:15
6:15 PM: Doors Open
7:00 PM: Original Pre-show Featurette, live talent conversation, additional on-screen conversation,
followed by screening of full length Wayne's World Movie (1997) PG-13. Run Time: 1 hour 37 minutes.
WHO: Director Penelope Spheeris, Tia Carrere, Colleen Camp, others TBC live,
along with an on-screen presentation with Mike Myers, Dana Carvey, Lorne Michaels and Rob Lowe.
Posted by beckler at 12:23 PM 3 comments:

not really, but sorta 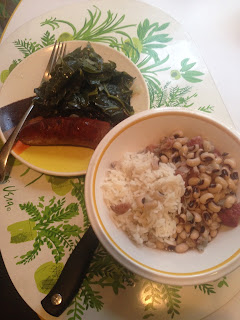 I made hoppin' John on New Year's Day. You don't come here for professional food photos, right? I do feel like it's good luck to eat certain foods on that day. No really, but sorta. I used ham hocks I got from Taylor's. There was a lot of meat in 5 bucks worth of ham hock. And collards. And andouille from Morant's, which was really just over the top. The meat on the hocks was enough. Everything tasted better the next day, and of course needed to be doused liberally with Krystal hot sauce. Speaking of Krystal, I have been craving Souths's fried chicken ever since I had it a couple of weeks ago. Will have to go again soon.

Struggling a bit into the new year, with some bad energy happening, but I think I'm clear of that now. I'm about to go on call for a week so no drinking for a week, which is a good way to start the year. I worked out four times last week! That is huge for me. Or I should say rare. It's not really even #goals, but it felt good. I also checked out the Asha bathhouse. Pretty cool. Go when the weather is cold!

Can I recommend that everyone watch Paris Is Burning (I had to get the DVD in the mail, so I'm not sure how you can access it on your various media outlets) and follow the voguehouseofnewyork Instagram account? OK, well maybe not everyone loves that as much as me. But if you ever saw Paris is Burning and liked it, and are on Instagram, check it out.