maconagheuy of the year award goes to.....

NH and Biz had a super fun party this weekend. The highlight for me was collaborating on a list of baby names for our expectant friends. There were names such as Aaliyah, #baby and Mike Tyson's Punchout. Number 420 on the list was Mountain Girl.  We all know that they are really naming their baby Clambake.

I saw MacBeth last week at Capital Stage. The run is over now. It was my least favorite production they've ever done. Lady MacBeth was miscast. The staging was ok, but I think that play has been done a lot in a post-apocalyptic setting. Really the only person who got any emotion out of it was the guy playing MacDuff. I'm sure the fight scenes were very hard to choreograph. Still glad I saw it.

I also saw Dallas Buyers Club. I recommend it even though the plotting is pretty much straight out of the Oscar Playbook. Maconoheuey (can't spell it) totally deserves the Oscar.  Not just for losing all the weight either, plus he's had so many great performances lately. He actually deserved the Oscar for Magic Mike. He has to at least win the golden globe for best macaonahay this year. I can't believe Channing Tatum took it last year!
Posted by beckler at 9:22 AM 7 comments:

peek into my mind

I quit my once-a-month-gig at the snr. It was great money, but I was always scrambling for deadline, hate giving bad reviews, and hate giving stars in general. Believe it or not, I don't eat out very often. I never go out to breakfast and lots of my dinners are snacky. Like some cheese and bread and a salad. Or some smoked mackerel and a shitload of dijon mustard (I can eat a spoonful of mustard right out of the jar). Lunch I'm in Davis five days a week. So except for an after work thing with friends (which I wish I had more time for) I only eat out on weekends. I guess Sunday at Pho Saigon has gotta be my most regular jam.

Which means that I push deadline because I naturally wait a couple of weeks after the last one, even though I vow to not do that, and then I am scrambling for time to eat somewhere at least twice. And then if I decide on a place, sometimes it's not good or just mediocre and not worth writing about. But then I'm trapped into reviewing it because not only am I running out of time, but I have often spent 60 or more dollars buying a few people dinner so then I'm committed to reviewing it.

ALSO, this obligation to try these places is not fun because I really just want to hit up places I like and don't get to go to enough. I've probably eaten at Magpie maybe twice this year. Insane!! I don't go to Masullo enough, either. Although both of these places end up being more expensive than I want them to be. I'm not complaining about that, they deserve it.

Even more reasons: Scott hates the rigamarole and how stressed I get when I have to review a place I don't like.

The funny thing is that the writing comes super quickly and easily no matter the subject.

I'd rather focus more on Edible at this point. Things are going well with the new owners and we've got DKK on the team now! And Ngaio Bealum is contributing. I love his writing.

So that's what's going on with me. the millionth reason: my new job is busy and stressful. even though I sometimes don't consciously feel all the stress because I'm good at repressing my emotions (over 20 years of it with my family), I go through periods of clenching my jaw and biting the insides of my mouth at night. Sometimes insomnia, but not too bad right now.
Posted by beckler at 8:52 AM 11 comments:

I've been so busy at work that it looked like I just declared I was moving to Portland and never going to post again. Heckaportland does not have the same ring. I do have to stay for a while for  my job anyway, and by then maybe the urge will have faded.

But it kind of seems crazy that me and smiller would live in the same city our entire lives, given how much we like to explore and get to know new places, right? How many of you out there lived here growing up and have stayed?

But I'll post more. I don't have any time now, either!

I couldn't sleep last night so I decided to upload Portland photos. I still hope to finish Japan at some point. Thursday is me 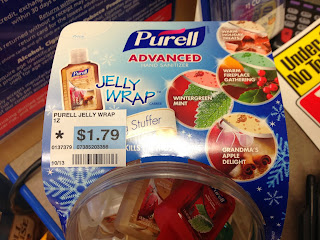 Here are some nice stocking stuffers: holiday scented purell with a handy hook for hanging on the tree! Portland pics, after the jump
Read more »
Posted by beckler at 9:16 AM 38 comments:

I stayed in SF and left my phone charger. Of course I did, that is the customary item you leave. At least I can get Apple stuff on campus. Went to Nopa last night and it was wonderful wonderful. I will certainly eat there again. All the small plates were flawless. Wood-baked giant white beans with mild feta melted on top with salsa verde and intense tomato sauce. Toasted crunchy quinoa with smoked trout, pickles onions, and fish roe.  As almost always happens the entrée was not as good. Rabbit legs with risotto and snap peas. The rabbit legs were perfectly cooked (my sis called them "slimy" but I disagree) but the risotto was gummy and had a watery sauce. Fuck risotto. It's one of those things that you always order, chasing a perfection that never happens.  I had a glass of sparkling gamay rose to start and then a gamay with the rabbit. Perfect!! And it's not really that steep, especially if you just ordered a bunch of the small plates and salad or soup.  I spent almost as much at a casual dinner at The Press the other day.
I stayed in the deep sunset, which is annoyingly far from everything but it sure was nice to wake up to beautiful sunrise light bathing the city instead of the grossness of the mission. No offense to mission dwellers I know it has a lot of good qualities. 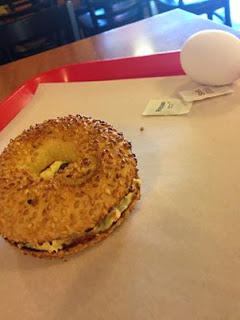 I made a monumental (to me) discovery today. Went to get breakfast at Posh Bagel which I haven't done in many years. They have the usual giant fluffy non-bagels bagels. They now have "mini bagels" which are pretty much the size and density of how a bagel should be! The chewiness and flavor is still lacking but they are halfway there! This is going to change weekend breakfasts for me and smiller. Note the egg on the tray for scale.
Posted by beckler at 11:40 AM No comments:

OMG there is seriously a band called Joanna Gruesome. You are really going for some serious longevity with a name like that. Although does band longevity even exist any more? It seems like the course of bands is twofold (whether they are good or not): you are either unworthy of that elusive hype factor (e.g. you are not young or goodlooking) or you are prematurely hyped, followed by being deemed overrated due to the hype, and then quickly forgotten.

After seeing Parquet Courts in Davis I seriously cannot believe that they got on they hype circuit and even as a non-pavement fan it seems ridic that their name would often be invoked. By no matter because they will surely soon be forgotten. I have nothing against them as dudes in plaid shirts.

But I'm not bitter about the state of music today! Ha!

I rewatched America Beauty for the first time, maybe since it was in theaters and boy what a piece of crap.  (from looking at imdb I just found at that the aerial shots in the beginning were filmed over sac!) and I LOVED it when it came out. Did it capture some end of the 90s thing that I can't relate to now? After all, I was 25 when it came out (goddamn I am old) and should have known better. I certainly could not relate to anything about any of the teens, nor the suburban career thing.

Remember how into it everyone was? Like creepy Lester's quotes that were practically bumper stickers: "I'm just an ordinary man with nothing to lose", "this isn't life; this is just stuff", etc. I feel like Lester was some kind of heroic sticking-it-to-the-man type character but in reality he's the biggest creep ever. I am usually in favor of boobs, but the teen boobs in the movie are just exploitative (including Thora Birch, who was barely 17 at the time). Crap crap crap.

I also watched "to die for" (guess I'm on a 90s kick) and I found it just as airless and unaffecting as I did originally despite the fact that I was a huge Gus Van Sant fan at the time (and still somewhat of a fan now).  Nicol Kidman's rigid all-pastel color scheme is something I am not in favor of in movies. It turns people into caricatures and deadens them visually. I feel the same way about Edward Scissorhands even though I love that movie.  But boy is To Die For prescient about modern celebrity, reality show type culture.  Ileana Douglas is really cool in it and very interesting in this av club interview.  Lots of stuff about Scorcese and the good old days of movie making.

the fake food vs. the real food

One of the reasons I haven't posted, besides being busy at work, is that the process of uploading photos to blogger is unbelievably laborious. I should have switched to wordpress a long time ago. Kyoto after the jump!
Read more »
Posted by beckler at 9:13 AM 4 comments: