I made two big life changes during the pandemic: started running and started meditating. The other one, which I didn't initiate ('rona did it) is no more twice-a-year visits by my mom which even though they were only twice, took up a bigly amount of space in my head because they were so stressful to plan and execute, so it always seemed like a visit was happening soon or had just happened. 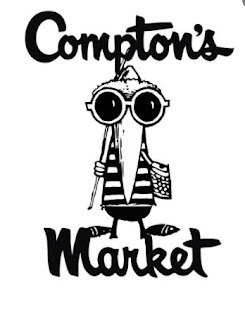 But I digress, so running was due to not being able to go to spin as my main way to "stay in shape" whatever that is to a given person. I got really into it as something I could do when I couldn't do anything else and I was maybe running a little too often and pushing my mid-40s (cough *late 40*) body a bit, and since about May I have scaled back and run on average 4 times a week, 3 miles at a time. At that level, I don't get any injuries or soreness so it seems good. I found that I love to run in the extreme cold so I may up my distance again when the temperatures drop. I usually run at around 7 am everyday, rarely later than 8. Yeah, running is cool if you can do it and/or don't hate it. I do get sick of my McKinley village/Elvas area runs but I have a newfound appreciation for Compton's Market and their deliciously old-school logo and vibe. I mean, I don't shop there often but I think about it a lot as I run past. I love how there is a bar inside for East Sac Grateful dads to drink brews. I have also learned where the citrus, fig, loquat and cherry trees are to raid and pillage as I run
OK, now blogger has decided to center align, whatevs.
Second change, meditating. That one is a bit more recent. UCD sponsors live meditations sessions, so I started that, and downloaded the Calm app (which I now got rid of and use 10% happier instead which is a great app despite the pathetic name). Now I meditate for a short sesh most days, sometimes twice or even three times. Sometimes if I do a body scan style one I will fall asleep briefly. That has been a life changer because it's making me tune into bodily sensations, and to note how often my heart is racing or I feel super nervous or tense. It's helping me to change that.
A side-effect of changing that is that I'm starting to notice I can't "handle" the stress I used to be able to. But what does "handling" mean anyway? A lot of times I think handling is just supposed to mean ignoring your stress and bodily sensations and plunging in. That's a lot harder when you are tuned into those feelings. Maybe that's why this younger generation is viewed as kind of fragile, because they are aware of mental health best practices and yikes "self care".  Anyway, these are musings that are on my mind, it really doesn't take much time at all to take a few breaths and ground yourself periodically, it can be done during the same amount of time that you might normally be scrolling on social media or stress snacking or something.
Posted by beckler at 2:55 PM 1 comment:

I watched the Shirley Jackson-ish movie last night. And by "ish" I meant that the movie is based on a fictional novel with only a tangential relationship to Shirley Jackson's life, mostly because there are no kids in it and she had 4 kids. The movie has a Who's Afraid of Virginia Woolf vibe with a fictional young, hot couple coming to live with Shirley and her obnoxious husband.

Few things: Shirley Jackson is a damn trip. You can be a fan (I am BIG TIME) and not realize she wrote two child rearing non-fiction books. Life among the savages and raising demons. Reading Haunting of Hill House and imagining her in the Erma Bombeck type of writing space is very weird.

How is Shirley the movie? Better than I thought it would be. It all hinges on Moss and some of it is a bit wobbly at times but overall maybe I was just swayed by the excellent shirts that Shirley Jackson wore. 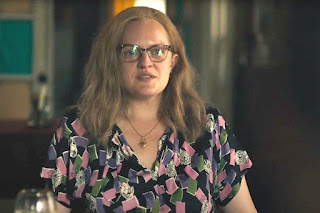 This duck one is particularly good 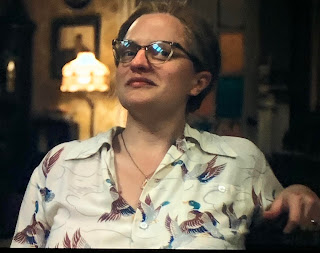 Here's another trip about Shirley. She died at 49. 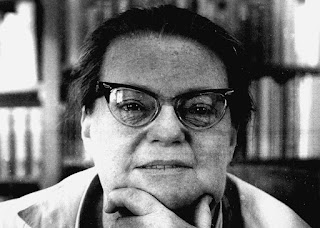 People really aged differently back in the day. But I feel like a dick pointing this out, I'm being honest that I was tripping on it, but also a reason I vibed with the movie is because as someone who has grappled with self image my entire life I am drawn to stories of women who yield power and magnetism that they do not gain through beauty.
During the movie Shirley is writing a book that I had no idea is a real book, called Hangsaman and now I must read immediately but help I have like 12 books lined up to read right now!!! Current rotation: Call Me By Your Name (trying to rush to the dirty parts), How the Word is Passed (reading with a friend) and a book on daughters of narcissistic mothers. Just finished: Shirley Hazzard The Great Fire.
As far as the Jackson oeuvre I've read We Have Always Lived in the Castle and Hill House is the best scary book of all time IMHO. Of course I've read The Lottery but probably should check out more of her short stories but I just don't really like reading short stories.
The director of Shirley is Josephine Decker who has an interesting body of work. I have seen her movies "Butter on the Latch" "Thou Wast Mild and Lovely" and also a very cringey doc. that she made with an ex about their relationship that has a lot of real sex in it! And them talking about where their relationship went wrong. Shirley was def her biggest movie, with Coppola as producer and I wonder what it did for her career. It got released during the pandemic. I know flops are harder for female directors to recover from. She has a new movie in post-production with Jason Segel in it. Haven't thought about that guy in a while. 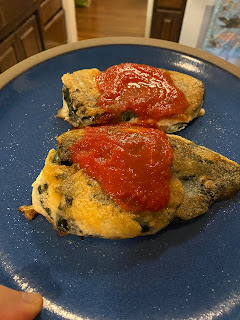 I am off the 'Gram so I have nowhere to post food photos. This one is an extremely bad photo and also you can see where I salted after cooking and there's salt on the plate. I made chile rellenos. Two coworkers had told me it's not worth the trouble but I would make again. I made two kinds: stuffed with Oaxacan cheese and the other stuffed with a saute (how do you spell) of shrimp, onion and tomato.
I made the sauce from garden tomatoes, serrano chile, garlic and onion. Blended, cooked down and strained.
The different thing about frying rellenos is you whip the eggs. The recipe I had led to me overwhipping them so that they were too foamy and wouldn't coat the chile (which is first dipped in flour). So while frying the second batch I added another egg white and mixed in so it would not be so stiff.
You roast the chilies beforehand and de-skin and de-seed etc. I think I overroasted them slightly so they were too soft and tended to split. You can hold them together with toothpicks for frying, but it seems sketchy like you are going to bite into one.
Delicious! It made me miss my customary 524 relleno order even though mine were better.