Wow, my yoga class(ha I just accidentally wrote practice first) really worked me last night. I don't know if I can make it to Zuda tonight. Why does it have to be hot yoga? My teacher last night said it's "Baron Baptiste style" power yoga. I have heard this guy name dropped before by personal trainer types. I'm sceptical. Or am I skeptical? how do you spell that?

Tonight there is a possibly interesting wine tasting at 58 degrees. The wines of Lucien Albrecht, a winemaker from Alsace. Better than their usual tastings of like foothills zins or whatever. Also, the SN&R is having a release party at Bows and Arrows where there will be FREE FOOD. From Old Soul.

I got my new Via mag and eagerly tore it a new one last night. There's a weird story about midtown in it. The bad? The phrase cow town is used in the first sentence. People (such as the lady from L Urban Wine Euro Lounge) say things like Sacramento needed to "grow up". I thought I was grown up even before her two bit operation rolled into town! I know, getting quoted can be lame, and sometimes people lead you into saying things that confirm their pre-decided angle. The good: Olivia gets quoted a couple of times. The Waterboy gets a shout out. The weird: out of the six places it mentions to eat, three of them are burger places, and the three they pick are Suzie Burger, Fords, and Willies. None of which would be among the three burger places in Sac I would pick to mention.

Are you ready for some poor photography? Here's a shot of all the prep for the goi cuon I made the other day. It was a lot of prep. I made the daikon and carrot pickles, which I think really need like a day to sit in the vinegar. How do I know? By the next day they had that signature, half rotten, turnipy funky smell. In fact, it was the first thing I smelled in the morning when I opened the fridge. Kinda nauseating in the morning. 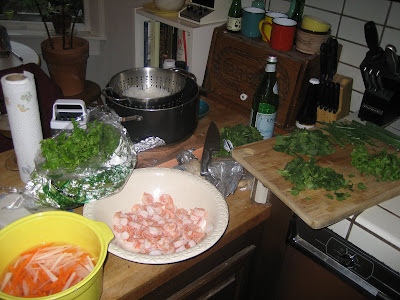 Here's the aftermath. Not the most beautiful rolls, but I'm learning! 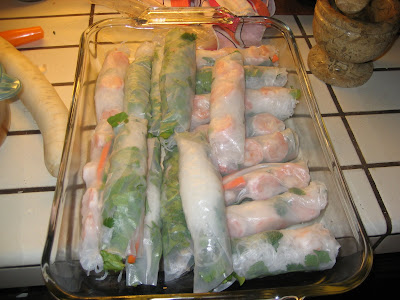 I spent some quality time at Otos last night, which is more fun for me than going to a movie. I bought a rice steamer, but I'm such a cheapskate I balked at one of the pricey robotic models that do everything except clean your house. I had bad dreams all night about buying a substandard model. 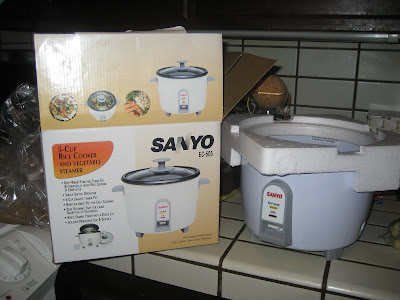 Oh yeah, here's the best thing in the world, no big deal. No, not my chest (which is compressed into a sports bra, btw, it's usually more impressive-yes I did yoga in this shirt) it's a homemade tie dye with an awesome bob marley sketch on the front. Boom! 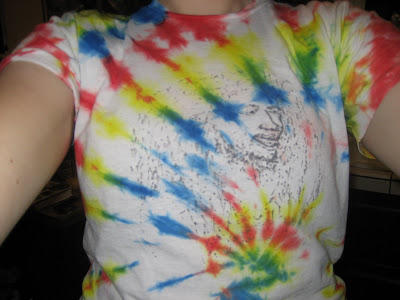 And here's some greens I randomly picked out, which turned out to be Japanese mustard greens or California peppergrass according to the internet. I didn't know what to do with it, so I steamed it, and it was grassy and good. 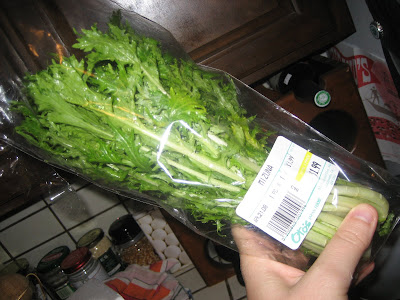 Have you tried boiling the vinegar and then pouring it over the veg? It speeds things up a bit.

No, I'll do that next time. I need to get a mandoline, too. I cut them all by hand and they looked terrible.

You would be sceptical if you were in Britain, skeptical here in the U.S.

oooooo!!!! i just read that via article last night too and it stunk! it was almost like the guy wrote it remotely having never actually been to midtown but instead was just told about it through friends and press releases. bummer!

I too read the Via last night
as I fell aslepp (yeah I read via before bed, who doesn't?) I tried to imagine what you would think of sac if you just read that article.
It was weird, and the Suzie Burger mention just seemed weird to me, the place just opened.

I am in the market for a rice cooker and am also cheap, let me know how that one goes for you.

A couple months ago Ben and I were walking around 18th and L (to Bows and Arrows actually), and a Via photographer asked if she could take our picture because we looked "arty." We told her no like 5 times, but she kept whining about how she was losing light, so we finally gave in. The picture was of us walking in front of the Wildflower Boutique, which I thought was funny because I've never been in there. Luckily they didn't include it in the issue. I think I was smiling like an idiot while staring at the ground. Not something I would have wanted to live on after I'm gone. Later we saw her taking pictures of Bows and Arrows, which would have been cool if they put those in there! It would actually represent the good New Sac.

well, if I knew someone that was visiting sac I would definitely recommend that they head straight to the train museum and then to willie's to grab a bite to eat. so at least they got that right.

omg! the concert series at cal expo was announced and baby v is playing!!!! also, al jarreau. i guess the highlight will be the moonlighting theme?

bill b. posted a super good thing about that article on yelp

mmmyeah, missing Jim-Denny's AND Nationwide, but including comparative newcomer Suzie Burger? That's the cost of free plugs, I suppose--the risk that the writer, who ain't from around these parts, will get something horribly wrong. I can't find an Orbit station in my 1952 or 1960 city directories, so I'm gonna have to go down to the library and find out exactly what the Suzie Burger building was when it started out.

I'm gonna go give that writer a smack upside the head. Sacramento was never a cattlemen's destination: we had a couple of slaughterhouses (well outside of the city limits) but the big business in Sacramento was vegetable canning, grains, and of course beer. Not that getting one's start as a "cow town" is necessarily a bad thing--ask Chicago, formerly home of the world's largest stockyards, or Los Angeles, formerly known as "the Queen of the Cow Counties."

Sacramento hasn't been a quiet country town since 1849. We sprang up as a city pretty much overnight, and became a center of government, transportation, and industry within twenty years. I can only assume that Sacramento got its rep from people who either never left the suburbs and refused to go downtown, or people who stopped in West Sac or Orangevale by mistake and assumed they were in Sacramento.

I was looking forward to that pic, Michele! I am bummed you didn't make the cut.

Also they are starting to schedule bands for the state fair. I was pretty stoked on Grand Funk Railroad, but I read that they are playing a lot of their new stuff. New stuff?! Weird Al will be back.

Also, you saw the the Fiery Furnaces are playing harlowe's on May 28th, right? I am sure you have a super fan super connection.

no, I didn't know that! I checked their weird website like a week ago and that wasn't listed. Awesome. I'm so glad they're not coming when I'm in Nashville. That would make me really sad. That's also the week of the English Singles show at the DAM house.

Beckler-
I think you'll be happy with the cheapo rice cooker. They work great. I have a very similar one.
Someday I want to get the zojirushi one that does everything too! They make jam for christ's sake.
Ella

Bill you are the man.

Beckelr, whats the deal with bagging on Fords? Not in the tops three?

I've only been to Fords once. I probably eat two or three hamburgers a year. I haven't been to Nationwide in a year. I'm looking forward to whitey's on my birthday, but that's not until the end of july.

That's why I usually wear black.