I had an excellent time in SF this saturday. The new Gourmet mag is all about Latin American cuisine and before we left I was reading it and thinking to myself how amazingly varied it is and how I really need to eat Mexican food a lot more because it's pretty much the best, which was a perfect prelude to being in the Mission! We ate at El Gran Taco Loco, home of the mural of this stressed out Taco being marched out to certain death by the equally stressed out (and well hung) Jalapeno Bandito. 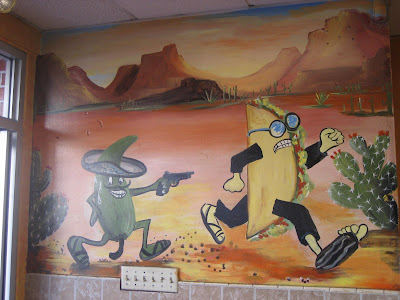 I had the birria which was fucking delicious! The broth was tangy and thick and the goat was gamey and tender. 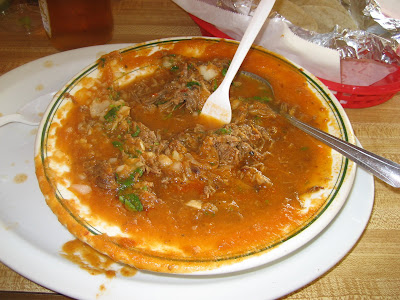 Later in the night I had Indian Pizza. 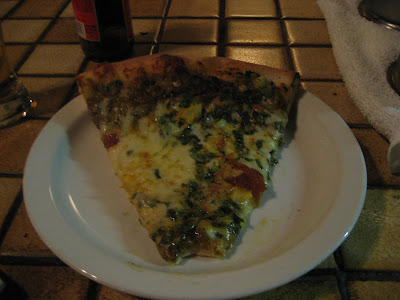 What's Indian Pizza you say? Why, it's regular pizza with curry powder mixed with the cheese, topped with coriander, onions and cooked cauliflower and it is two great tastes that go great together.

And then later, at Thrillhouse Records in the dusty, dusty basement, Nar played to a packed house 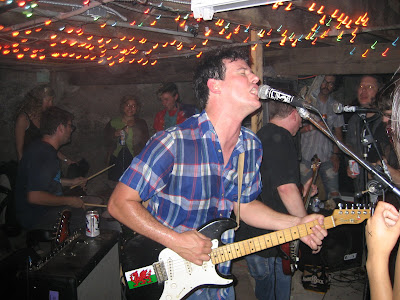 The Four Eyes headlined and everybody dug it. 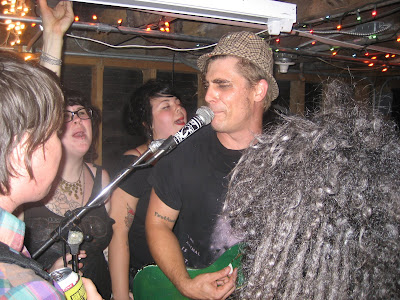 Joel is wearing the hat that I was semi-successfully rocking before the basement got too hot. 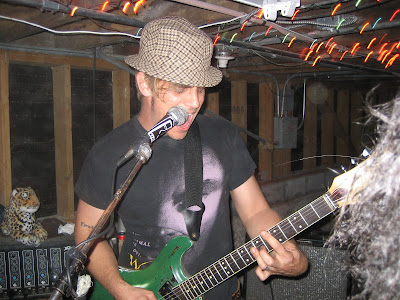 OK, that's a pretty crappy picture but I don't want to make it seem like I was only trying to take pictures of Joel. It was really smoky inside and I'm going to be a grump and complain about the people inside smoking. Have some consideration, people! 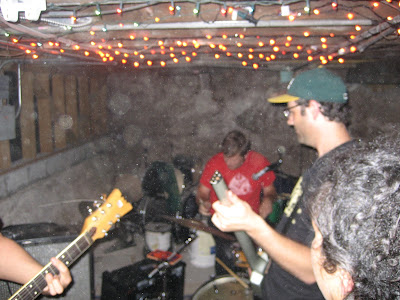 As a smoker, who chose not to smoke in the basement, I'm just going to go on record as saying the cigarette smoke was the best smelling thing in that place.
janana

i've had indian curry fondue once before and it wasn't so hot; the pizza looks grub, however.

is that jason D on bass in Nar?

I would like to conduct a scientific poll:
How many people caught a summer cold at that show?
How many people also drank out of the gross zappa beer dp bought?
It's a yes and yes for me.

Put me down for both a cold and trying that nasty beer.

No cold and no zappa dp beer. And I didn't even notice people smoking in the basement.

I'm sorry to tell you this jay, but based on this poll, and independent research done last night at dinner in which I remembered you drank out of the gross beer right before me, I've concluded you are the desease vector for this cold.
Thanks.
jana

as spock would say, fascinating. i am a yes on the zappa beer and a no on the summer cold.